This is a collection of preliminary random notes about the upcoming multiplayer. The information contained herein is subject to change.

Some of these limitations may be removed in upcoming versions:

The multiplayer scoreboard is displayed at the top-right:

Further down on the right-hand side is the bandwidth monitor. It displays the network bandwidth currently used by the game (if you’re hosting a game, then this chart includes your own local loopback bandwidth, which never leaves your computer, so your actual bandwidth usage is lower than what the chart shows). This is what is should look like under normal circumstances, all nice and blue:

Under poor network conditions, the “out” graph will start showing red. This is not what you want:

Nevertheless, it’s not clear who’s to blame for seeing red. It might be your own network connection, or one of the other players. It’s… complicated. Report experiences here.

NAT is part of your router. The game has no control over it. There are four types of NAT:

If you have a “Full cone” or “Restricted cone” NAT, then all multiplayer games will be available to you (the game will say “you have full network connectivity”). If you have one of the other two, then bear in mind that:

Some routers allow you to change which type of NAT they use (they might not call them with these exact names, or they may only have a checkbox to switch between two of the types).

Starting with v.92, it’s possible to force the game to use a particular UDP port when hosting/joining multiplayer games (from the main menu, choose Options → Network). This option is meant to help players with “Port-restricted cone” or “Symmetric” NATs.

Only change this setting if you know what you are doing. Improper values may crash the game, or prevent you from playing multiplayer games altogether.

Note that simply setting this option will absolutely not help you connect any better. You must also perform manual configuration on your router. Specifically, you need to do two things:

The process to do this depends on your router, so you’ll need to consult your manual.

Alternatively, if your router supports UPnP, you might be able to configure it using a graphical utility such as UPnP Wizard - Port Mapping Tool . Note that UPnP leases expire, so you’ll need to do this every few hours, but at least you won’t mess with your router directly. You also don’t need a static IP when using this tool.

Set a random value here. Recommended range: 10000-30000. The port needs to be free. If the game crashes, it means that the port is already used and you need to find another free port.

Routers normally use DHCP to assign IP addresses to their connected devices (including your PC). These IPs change over time. However, there is typically an option called “static IP assignment” or “LAN server” (or something similar) which will nail down a device to a particular IP forever. You need that to ensure that your PC is always receiving the same IP (which is required for port-forwarding to work).

In order to assign a static IP, you typically need your MAC address (your router should be able to tell you what it is, if you look at its currently connected devices, or run ipconfig /all in a command prompt and look at “Physical Address”). If your router can port-forward directly to a MAC address (instead of an IP address), then you don’t need a static IP at all.

Routers typically block all incoming network traffic (unless this traffic is a response to a request made from a computer inside your LAN). However, you can set up rules so that traffic arriving at a particular port “from the outside” is forwarded to a particular IP on your internal LAN no matter what. You can use “port forwarding” (also called “port mapping”) to ensure that your computer is reachable by other players, regardless of your router NAT. Set up a rule on your router to forward all UDP traffic on the game port to your internal IP.

I noticed that when joining a game mid-wave, the music won’t start playing until the next wave/stage.
(Someone else who joined my game also said they couldn’t hear any music.)

I can’t join a multiplayer server because my NAT is symmetric, but can I create a multiplayer mission and then let other people join. Is that work?

can you make a private room server? with passwords

two, then bear in mind that:

I had to use VPN to be able to join some multiplayers. Symmetric doesn’t let me join any games or the server kicks me out for joining available games. The game detected my connection as Port-restricted cone (Instead of Symmetric) after using VPN.

Avoid using the Photon Swarm, because it eats up a lot of bandwidth.

Oh, come on. This weapon is my favorite one.

You can play any planetary mission as multiplayer, except key rushes. Also, no competitive/league/cup missions (for obvious reasons).

If league has been added for multiplayer, I will prepare some cooperative challenge for sometimes.

But this won’t happened when this feature was blocked.

I was thinking at only the player who looks at that person’s spaceship POV should be prioritized or having the highest opacity, other spaceships could just be a bit transparent. Would that work?

can you change your NAT? im dumb

IDK If you can change your NAT if have, I will be happy

It depends on your router’s settings. I personally couldn’t find it anywhere and my NAT is Symmetric, but maybe yours has it

Yes it does if the other players have full/restricted cone. You also can join other people if they host and have that NAT type. But otherwise yeah, it’s very limited

Obviously this is just the bare-bone of multiplayer, so I’m gonna list some items from player’s suggestions so that iA can look at it more easily:

I can’t bring satellites with myself in multiplayers. [11] [12] UPDATE: That was ok while playing as a guest.

we need pausing to be personal. it gets really annoying when there are many people and some keep pausing while others resume.

It looks like if you have custom music selected, but you join a game with a wave in-progress, you will hear the default music until the next wave starts. Also when I joined a random boss rush game, I couldn’t hear music at all until the next boss fight

I suggest a “waiting room” so that all players can start the mission at the same time, and optionally prevent other players from joining midway of the mission. Here’s what the room creator sees (after clicking “Fly mission” with multiplayer settings): 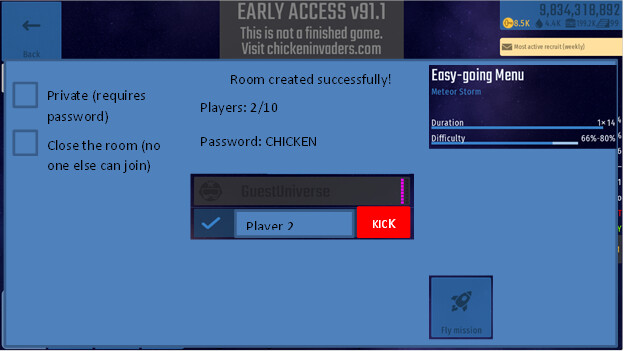 Here’s what other players see when they enter: 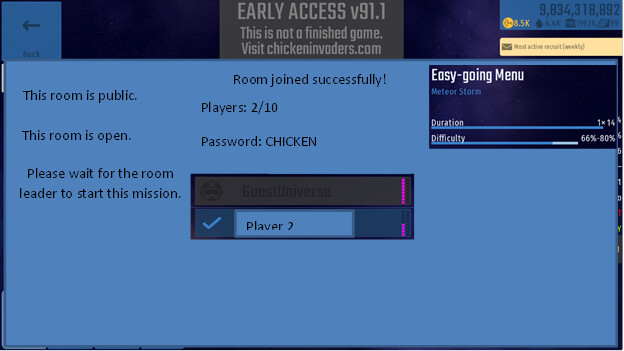 i suggest highlighting your ship because it looks so chaotic

i have a tplink router 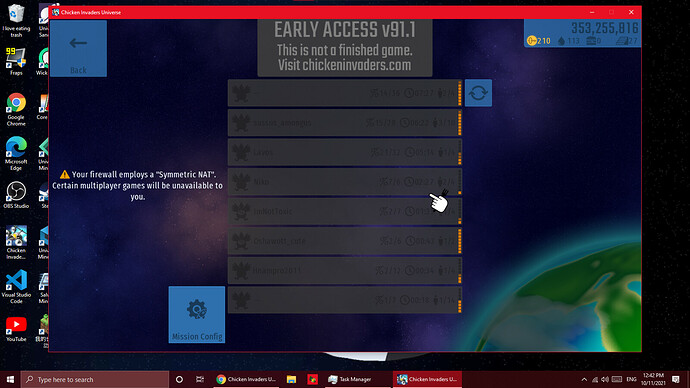 I got that to