🌎 How to translate the game

Chicken Invaders Universe is the first game in the series which allows the community to translate the game via an in-game, real-time translation facility. It’s a community effort where anyone can contribute. It also employs some advanced features to help translations be consistent and of high-quality (more on that later).

After logging in, Press Ctrl+T. You’ll be presented with a list of languages to choose from. Selecting the appropriate language will download the relevant translation from the server so you can edit it locally. After downloading, you’ll be returned to the game and nothing will have seemingly happened.

(Windows 7 users will see an empty square instead), which means that it hasn’t yet been translated in your selected target language. Or, you may notice text that has been already translated (by another player), but which needs adjustment/correction. In either case, press Ctrl+T to bring up the translation screen: 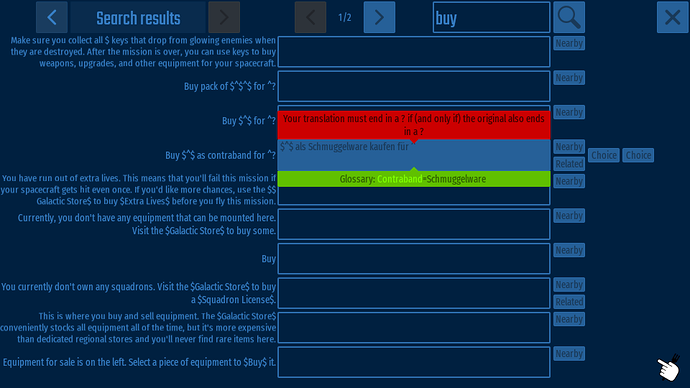 or Mouse wheel to move through the pages of text.

At the top-left you’ll see a field which controls how much of the game’s text is shown and in which order:

By default, Recently seen (untranslated) is selected and the desired phrase will be listed around the top. In cases where you can’t find it, use the search field at the top-right (it will search through both English and translated text).

One of the first things you should do when starting a new translation is to select Nearby and edit the first 7 phrases at the very top, namely the language name, your name, the language direction (left-to-right or right-to-left*), the thousand and decimal separators (required to display all numbers correctly), the numeric digits (required to display all numbers correctly) and the pluralization format (see “Plural Forms” heading below).

* For RTL/LTR changes to be applied, you must exit and re-enter the translation screen (with Ctrl+T).

Enter your translation in each text field. There are some characters that have special meaning:

You cannot use any of these special characters literally in your translations.

Some other special characters you can enter:

There is also rudimentary cut (Ctrl+X), copy (Ctrl+C) and paste (Ctrl+V) support. You can select a region of text by dragging with the mouse. Generally speaking, each phrase is unique so copy/pasting should only be used within the same phrase. If you find yourself copy/pasting between phrases , then you’re probably doing something wrong.

On the left of the field, you’ll see the original English text (if the text has been squeezed and is unreadable, use the

icon for a larger view).

On top, you’ll see any errors. You’ll need to fix any errors, otherwise your translation will be ignored and won’t be saved on the server.

Underneath, you’ll see a helper list of glossary terms related to what you are editing. This makes it easy to have consistent translations for core concepts in the game (for example: “Special Weapons”, “Satellites”, etc). (

these glossary hints are manually programmed, and some may be missing)

On the right, you’ll see any comments that may aid in the correct translation. There are also several additional buttons potentially visible here:

RETURNING TO THE GAME

Press Ctrl+T after finishing your work to return to the game.

Alternatively, press Ctrl+E to revert to English (The following rules about when text refreshes still apply. You’ll be asked to re-select your language next time.)

Upon exiting the translation screen, your changes will NOT be visible until the game needs (loads) the text again. Most text is loaded right before it’s displayed (so leaving the screen and re-entering it again will make the new translation visible), but some text is created once and never touched again (for example, the text for your Inbox), in which case you’ll need to logout and re-login.

Starting with v.95, there is also the capability to export all phrases to an Excel file, work on that Excel file independently, and then import your changes back into the game.

If the game updates while you have a translation in progress, then you’ll need to move your Excel file from the old version’s folder to the update’s folder so it can be found and imported. After importing, you should also delete it and re-export it so that it includes any phrases newly introduced in the updated version.

Excel is not supported for Right-to-Left (RTL) languages.

To export to an Excel file, press Ctrl+G at the translation screen.

The location where the file is saved is displayed on the screen. Once you export an Excel file, it is no longer automatically updated with changes you make in-game. You must delete the Excel file and re-export it to receive the latest changes.

Edit the Excel file. The columns are as follows:

Save your changes in Excel and close the file.

To import from an Excel file within the game, press Ctrl+G at the translation screen. You’ll receive a status report about the number of phrases that were updated/unchanged/failed.

If you wish to leave some of these fields empty, then you should enter --EMPTY-- as the translation, exactly as you see it (note that in RTL languages, this will appear as --YTPME--)

First, you must select which rules will be used for creating plurals in your language, by selecting the most appropriate letter from the list below (for more information about this list, check out GNU gettext utilities ). Enter your selected letter in the “B” field at the very top (use the Nearby and move to the top of the list to find it.)

Then, on each phrase that requires pluralization (e.g. “day”), enter a space-separated list of the singular/plural forms of this word (in English, you’d enter “day days”). The number of plurals depends on your language – check list above for the correct amount.

If you don’t specify enough plural forms, the missing form will be replaced with an

Starting with v.73, there is some partial support for RTL languages and Arabic letter shaping. There are a few important things to note, however:

Rewards have not yet been decided upon, but it’s likely that major contributors will receive some combination of (a) credits mention, (b) in-game keys, and/or (c) free Chicken Hunter License.

In accordance with Early Access version 49 - #623 by InterAction_studios , medals will not be awarded for errors in either the original English text or any of the translations.

To help with getting started and to use as a reference for consistency (a lot of the phrases are common), here are the CI4 and CI5 translations (note that the translation rules for these games were different, so only use them as guidelines and not as hard-and-fast rules):

Q: Can other players edit my translation?

A: No, not directly. Your translation is your own, you always see 100% of it, and it cannot be overridden by someone else’s translation*. However, the translation shown to any other user consists of the “most popular” phrases, which may or may not belong to your translation. The assumption is that, over time, wrong translations will be unpopular, so only the best-quality translations will remain (well, that’s the theory, anyway).

* Phrases that you haven’t actually translated yourself yet are taken from the most popular translation, so you may see them change over time. As soon as you edit them, however, they will become immutable.

Q: Should I translate “InterAction studios” or “Chicken Invaders”, or any of the episode names (“The Next Wave”, “Revenge of the Yolk”, “Ultimate Omelette”, “Cluck of the Dark Side”)?

A: No. If they appear in phrases, copy them over unmodified (only translate the remaining text, if there is any).

A: Since the English text is embedded in the textures, you can leave them untranslated (but if you come up with a good translation, you should of course prefer it). Alternatively, you could translate them to their generic names (e.g.: Heroware → Dealership, Gus’s Gas → Petrol station, Madam Madamme → Fortune teller)

Q: Can I perform a “free translation” for phrases that are idiomatic, or don’t have exact translations?

A: Sure, provided that you keep to the spirit of the original. Furthermore, there are certain kinds of phrases (e.g., hero quips), where you don’t even have to stick to the original meaning, and which can be replaced with something completely different (note, however, that some quips are only displayed during certain times of day)

Some members of the community have created specific guides for a particular language. These guides are not official and they are not always kept up-to-date, but they might be of help when you’re getting started on a translation:

Oh, it’s open.
I’m glad to be able to help you translating CIU to Italian, but, don’t you think that this new translation mode seems easy to vandalise? Like, do you manually check if the translations break the ToS by yourself? Does the server automatically detect vandals?

we’re doing it for the whole Vietnamese fanbase

another question that how to cancel changes?

Possiblly, but remains to be seen. Any vandalizing will be short-lived, provided that there are diligent players who spot the problems and fix them (the “choice” button is very useful for reverting text to earlier unvandalized versions).

It’s not possible for me to check the translations (how could I), so the community will have to self-regulate somewhat. If you make a mess of it, I’ll just remove the feature and go back to the traditional way of assigning translations to specific people via an application form on the website.

Yes, I know that, but there’s also a way of typing called Franco
so شرطي be
Shorty
And a word with “ح” That doesn’t exist in English can be replaced by “7”
For example حصان Which means Horse will be 7esan.
Indeed, sorry for speaking with another language.

Atleast numbers can be translated, since arabic numbers are from left to right.

in pressed ctrl+T but nothing opened.

i tried and selected persian language
how can i return it to normal? (english)