Hi, i am galbatorix. I am new to the forum, but i have been playing CI series for several years (I played all 5 episodes and I have ~70 tier in CIU) I played some “bullet hell” games like “raiden X” too. And as much as I love “Chicken Invaders” series, there was always (from CI3 on, actually) one thing that really bothered me. I am kind of a hardcore gamer and i find it really frustrating. I am talking about the weapon balance on higher difficulties.

You see, weapons in Chicken Invaders are really unbalanced and not really thought out. This is NOT an issue if you are playing on Trivial-Intermediate difficulties, but higher than that, it suddenly becomes a really serious problem. When playing CI3-5 on superstar hero and then CIU on Elite difficulty, I noticed how Neutron Gun and Utensil Poker seem to outperform every other gun in those games. So I decided to do some research and testing to see if my observations are correct or not. I browsed wiki, checked CIU profiles, and of course, played a lot. Unfortunately, results of my research confirmed what i was suspecting. Weapon balance in CIU is bad on so many levels, that it may be fair to call it broken. There are weapons that do not serve their intended purpose, there are some that are outperformed by others in every possible situation etc. If you search the forum for a while its easy to find ppl saying things like " having plasma rifle is a problem on itself" or “please rework ion blaster” The problem is certainly there, so let’s look at some data I have gathered.

This sheet presents comparison between lvl 0, lvl 10 and max power of weapons currently available in CIU, so you can see how big mess is the thing. From that sheet and other data i collected, I have a whole list of things that are broken and need to be fixed in one way or another.

So, as you see, there are A LOT of problems here. In my opinion, game with weapons in this state should never be released. InterAction studios seems to notice this problem too. They made a decent rework of Vulcan Chaingun. But there is still a lot to do here. Weapon system has to be fixed, at least partially. As soon, as possible. And this brings me to the point of this post. I have spent a lot of time thinking about how to fix the issues I listed here. And I came up with the detailed solutions for all the problems. I think that some of my ideas could really improve the gameplay of CIU and overall player experience. But my question is : Does InterAction want to see, what I have to say about fixing the problems? Such a project takes a lot of time to do, and I want to be sure, that I will be heard. I don’t want to waste so much time on making something, that nobody will care about. So please tell me in the comments.

Simplified ideas I have:

All that with purpose to make all weapons a viable alternative for Utensil Poker and Neutron Gun.

For now, that’s all I have to say. I hope that forum users are interested in what i have to say. Especially InterAction studio themselves. I want this to become a serious debate, not a “hey lets change/add that” type of post.

Below i place links to all parts of the balance program I have created so far. New posts will be added to this list.

In terms of dps Untesil Poker outperforms Ion Blaster TWICE! There is no reason to pick Ion Blaster at all, because it offers no advantages over UP.

There is no reason to pick the ion blaster in general.

Riddler’s automatic fire should simply be made the same way manual fire acts,and manual fire should be capped at the same fire rate as every other weapon. Plasma sounds fine already,it’s good for dailies when you want pecking order bonuses.

from CI3 on, actually

I actually made a topic about this a long time ago (though my ideas for rebalancing the weapons were honestly quite rubbish) and I have a pretty decent theory as to why it may be so. 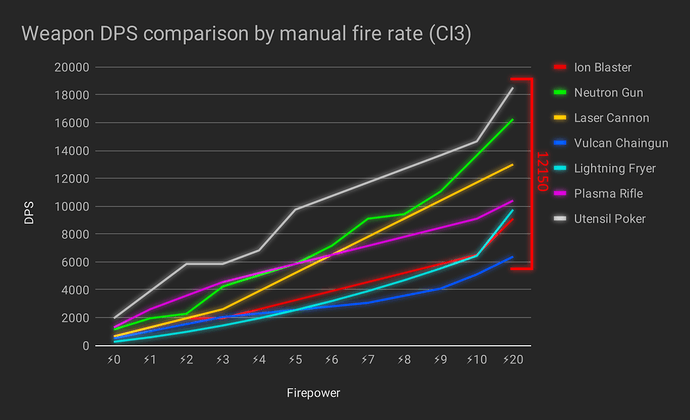 20 when using manual (or automatic if it exceeds manual) is over 12k. 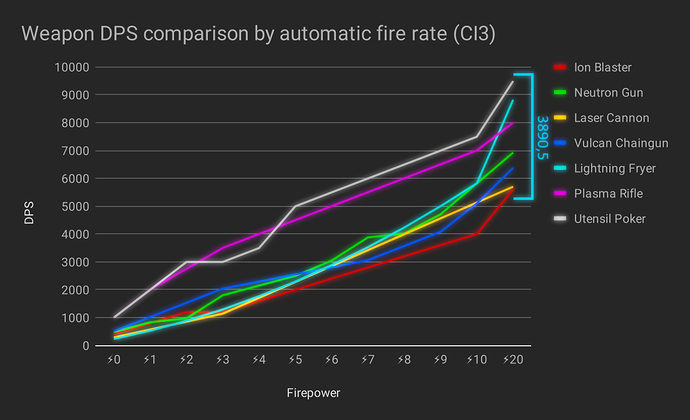 If we take into consideration only the automatic fire rate then the gap becomes significantly lower.

Since automatic fire was first introduced in CI3, I assume the weapons were actually balanced around it. Which is why we now have such a huge gap.

I’m looking forward to your next thread. This might actually amount to something unlike last time.

In my opinion every weapons should follow these rules 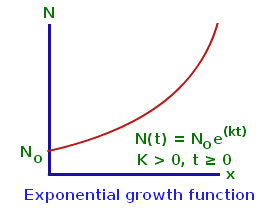 So there will be no sudden dps jump, overlapping dps between some weapons, and of course some weapons will be superior (ever) in term of dps, but that will be considered as “exchange” for their risk (auto-lock, auto-fire, straight attack, high overheat rate etc.)

Also there will be no useless firepower upgrades like Ion blaster 2 -> 3, Some riddler upgrade which is only shrinking its area target and also get rid of 11th boron railgun.

I’m also currently working for suggestion for balancing weapons, but I don’t have too much information, especially for overheat rate. So can someone please help?

Oh, also I would like to see your suggestion

1 guy who tried to fill the forum with his simplicity is the reason for this. @Chickeninvadersfan72

Your analysis is welcome. Two points:

Yes it is. I actually like to use plasma rifle, when it doesn’t hurt my gameplay too much, but the fact that this gun has some use in game, doesnt make its other problems disappear. At the moment, accidentally picking pink present when fighting Henterprise (on Hard-Elite) is fate far worse than death. And it absolutelly shouldn’t be a case. (I have fix for that particular problem btw) And gameplay- graphic design inconsistency is still a thing.

I am aware of that. I am concidering as many aspects of a weapon as possible. Auto-lock, number of projectiles, overheat, how much using of the wapon obstructs vision etc. However, all those factors are significantly less important than the dps itself. If DPS is not there, weapon will not be used, no matter how many features it has. For example a gun that would deal 22k DPS, but would overheat in 3 seconds, shoot straight and not auto-lock, would probably be balanced. But a weapon with insufficient dps that doesnt overheat and has autolock is still useless, because it doesn’t inflict required amounts of damage. Look at the lightning fryer, and how often it is picked on hard missions. In my analysis i am focusing on DPS, simply because this is not only the most important statistic of the weapon, but its also source of majority current problems in weapon balance.

It’s impossible to balance all weapons both under human and tool-assisted conditions. You must pick one or the other. A while ago there was an issue how fast the Riddler can humanly fire (Little question ).

Of course it is possible to do so. One solution would be to remove manual fire altogether, but well implemented shoots/s caps can do this too. Look at corn shotgun. That gun doesn’t cause issues, because it is cleverly designed in terms of manual and automatic fire rates. Riddler on the other hand is a horribly designed weapon in every possible way and that’s why it is so hard to balance it out.

Your analysis is welcome.

Thanks, I am very happy to see that. I will do my best to bring something fresh and interesting to the table.

In my opinion every weapons should follow these rules

So there will be no sudden dps jump, overlapping dps between some weapons, and of course some weapons will be superior (ever) in term of dps, but that will be considered as “exchange” for their risk (auto-lock, auto-fire, straight attack, high overheat rate etc.)

Also there will be no useless firepower upgrades like Ion blaster 2 -> 3, Some riddler upgrade which is only shrinking its area target and also get rid of 11th boron railgun.

Exponential growth would be the best probably, but designing power levels for some of the weapons could be very difficult. Btw, you reminded me of the useless level-ups. I forgot to include them on the original list, so I will add it via edit, because this is a serious problem too.

I definitelly agree with that 3 points.

I also think that every gift should give the same points. 5000 you proposed would be fine, but I think I would make it either 0 points(weapon changing doesn’t affect the score at all), or something like 10000, so the player is rewarded for using more than one playstyle.

Shop price equalization is a must-be , once weapons get balanced.

15, 25, 30 power levels are great idea, but I think we should focus on balacing current power levels first. Once that is done, this could be discussed.

Moron Railgun is supposed to be weaker version of Boron Railgun, but on power lvls 0-5 Moron is actually stronger.

Did you know that Moron Railgun can’t be upgrade. The only lv power of this weapon is 0

Did you know that Moron Railgun can’t be upgrade. The only lv power of this weapon is 0

His point is that you can start at higher power and more damage already with boron, and with moron you have to make your way to higher powers, making weapon changes a lot worse too.

with moron you have to make your way to higher powers

That mean to upgrade the Moron Railgun, I have to collect the Atomic Powerup?

Yes, there’s no other way.

Update: I changed name of my project to “CIU weapon program”, corrected some errors in my original post and edited it a bit for general improvement. Due to calculations made for Part 2 of weapon program, I also changed proposed overheat time for Ion Blaster from 11 seconds to 12 in Part 1. Part 2 is out now.