Hi, I am galbatorix and this is my CIU weapon balance program in which I talk about current issues with weapon balance and I propose solutions for them. More info about what my deal is you can find in my original post: CIU weapon balance program by galbatorix I strongly suggest checking it out, if you haven’t seen it yet, so you will fully understand what my goal is. I am coming back for a while after a huge hiatus about which I talk and explain things here. Today I want to talk about Corn Shotgun.

Corn Shotgun is an unique weapon when it comes to its performance in CIU. Depending on type of enemies and the wave, Corn Shotgun’s usefulness can range from decent to almost unusuable. I believe it’s because of some problems in this weapon’s design. As always, in my post i am going to present my thoughts on how it could be fixed. The issues with Corn Shotgun are:

Main problem with Corn Shotgun’s reliance on types of enemies is that it gets less effective, the stronger the enemy is. Not only it’s counterintuitive, but it also makes no sense gameplay-wise. We have a weapon that has relatively high firepower against chicks and generic chickens(and against them such high firepower is not really needed), but against enemies that actually require high damage output, Corn Shotgun is less effective.

That said, I think I know what to do in order to fix Corn Shotgun. Let’s start with problem nr 1 - the bumpy power increases. It can be fixed by reworking weapon’s volleys and fire rates on various power levels. I suggest to do that in a following way:

This may be a bit more complicated than my previous solutions for “bumpy power increase” probem, but it’s the only I was able to come up with for Corn Shotgun, and I think despite not being as simple as previous ones, it should do the job very well.

Because of limited projectiles that this weapons has (right now it has 7 projectiles at max power, my suggestion brings it up to 9), it was impossible to make this weapon gain both fire rate and projectiles at the same time, without drastically changing weapon’s characteristics to remove uneqal power increases. So I had to take different approach to deal with this problem. The solution I came up with is that Corn Shotgun gains fire rate and projectiles in turns.(+fire-rate>+projectile>+fire rate) This way every power increase feels (and is) significant, because it either adds a projectile, or significantly improves the rate of fire.

With problem nr 1 out of the way, we can jump to the problem nr 3, which is weapon’s reliance on enemy types.

Corn Shotgun’s strengths and weaknesses come from the fact, that together with Bird-Flu Gun, this weapon belongs to “Organic” group. (Terminology taken from Chicken Invaders Wiki) For satellite is seems somewhat reasonable to deal increased damage to regular chickens, but as I previously explained, it doesn’t work that well for Corn Shotgun. So the obvious way to fix this problem is to move Corn Shotgun to different weapon group. I suggest to:

Moving Corn Shotgun to “Special” group(right now only Postiron Stream belongs to this group) would make damage differences against common enemies disappear. Projectile damage increase is there to make Corn Shotgun deal as much damage to all enemies, as it currently does to regular chickens. Currently this weapon’s projectiles deal 500 dmg to regular chickens, 400 dmg to Armored Chickens and 340 dmg to Chickenauts and UFO enemies. After proposed changes they would deal 500 dmg to all mentioned enemy types.

With problems nr 1 & 3 covered, there is only one left. Issue nr 2, which is the fact that Corn Shotgun is an unreliable weapon due to this randomized spread and slow fire rate. To deal with this problem I came up with a rework for Corn Shotgun that includes highly requested “shooting popcorn when overheated” feature. I suggest to do such rework in a following way:

Below you can see simple visualisation of how it could look like: 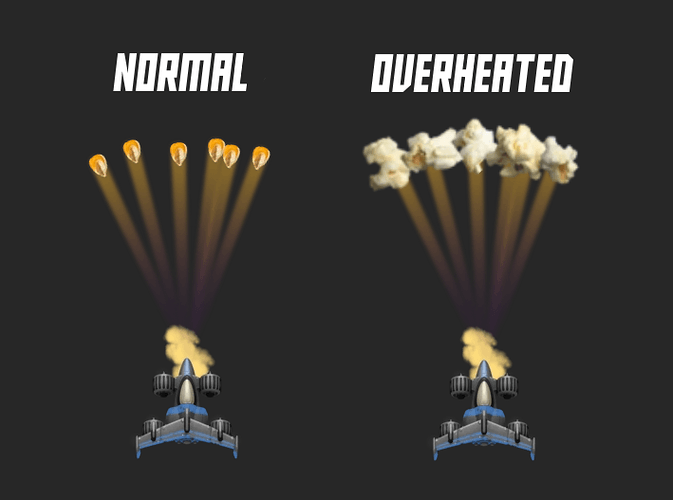 CS1.png710×527 75.3 KB
Such rework would essentially give Corn Shotgun an alternate firing mode with projectiles that are easier to hit (thanks to larger hitbox), but deal less damage. Thanks to different overheat times for manual and automatic fire, player could choose which mode to use. If player wanted to shoot corn for the increased damage, he could just fire the weapon manually to keep it from overheating. On the other hand, if player wanted to shoot popcorn to have easier time hitting small, but weak enemies such as chicks, he could just hold the button and get it to overheat very quickly. This would be especially useful on lower power levels, when volley consists of very few projectiles. In case player wanted to go back from shooting Popcorn to shooting Corn, all he would have to do is wait 1,5 seconds for weapon to start cooling down. (The moment Corn Shotgun starts cooling down, weapon goes back to its normal firing mode)

Together with previously proposed changes, this rework would make Corn Shotgun deal 19125 DPS in normal firing mode and 15300 DPS when overheated on max power. So it would deal slightly more damage than Utensil Poker(18200) when firing corn, and roughly the same amount of damage as Ion Blaster(15600), or Riddler(15300) when firing popcorn. This is probably the most complicated rework I proposed so far, but I think it’s worth it, because of how cool the idea of shooting popcorn is.

Here you can see results of all proposed changes: 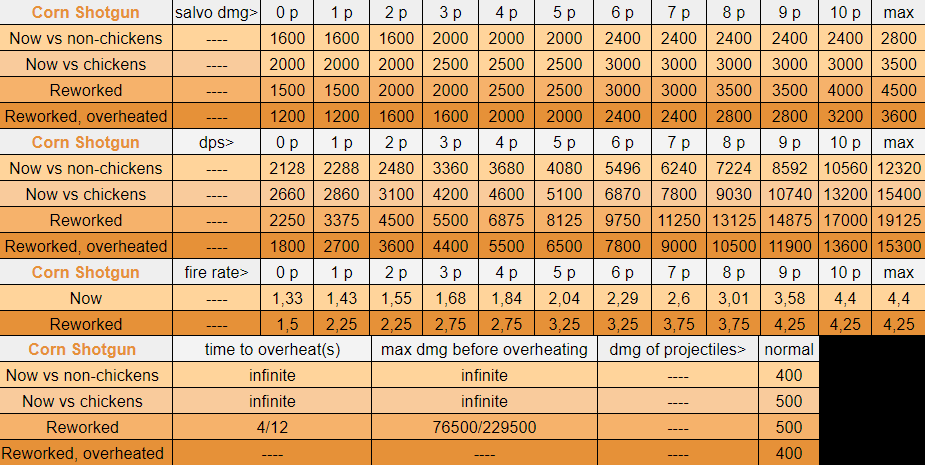 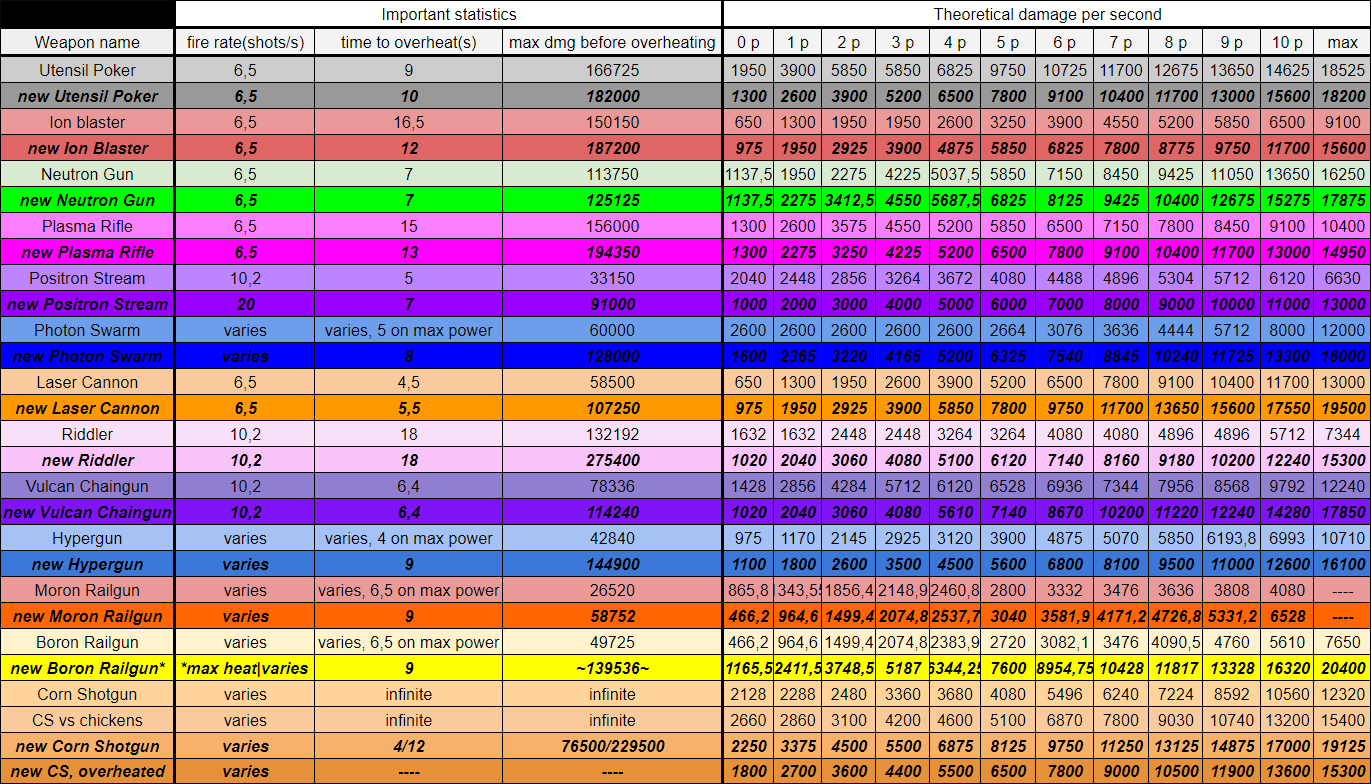 So yea, that’s it for now. Remember to share your thoughts in the comments below. If you think, that I forgot about something, or you have a different idea, feel free to tell me. I am interested in all kinds of feedback. Also, I am back after a huge hiatus, so please forgive me if my english got worse, or I made some silly mistakes. (But when you spot one, please let me know via comments or private messages so I can fix that.) I will try to finish the series as quickly as I can, but I am not able to tell when that will be. Anyways, stay tuned guys.

I think it’s a good thing as usual to add a chart about how much projectile and how fast it fires to this proposal. (some people don’t like to do math)

You know I was thinking about inculuding how many projectiles there are each power level, but I decided not to do so, because the charts would get large beyond any reason. But I you think there is need for that, I may add something like this later.

Of course I can add “higer/lower projectile speed” for popcorn, but I don’t know if that’s neccesary, and if that would really change anything for better. What do you think?

I agree, it’s not much of a difference. It generally only affects whether or not you can stack up shots before an enemy appears. With something like neutrons, you can fire before the enemy appears and it’ll get hit by all those bullets for extra damage. While something like lasers or corn can’t really do that since they’re too fast.
Other than that, though, there’s not much else.
And I got to say, thank you for this rework. Corn was my go-for weapon in ci5 multiplayer(a lot of the time), I’d love to use it in ciu normally, as well.

Most expected comeback of century… this is going to be a good 2020. I’ve got to say, it sounds strange to have a kind of non-overheating weapon, but I’m curious about how it could improve gameplay and diversity among the weapon roster.

Well, Corn Shotgun is already kinda a non-overheating weapon. If you fire it manually it will never overheat. My rework only adds special gameplay feature to the fact that this weapon doesn’t overheat

Yeah, I was talking about automatic firing mode, I should have mentioned that.

(Bad english)
Firstly I think all the guns should be kept as they are, the only balances should be about damage. And I don’t like your idea to make a gun strong in any situation. Secondly, as a player that genuinely only play corn shotgun, I highly disagree with those solutions. The gun is strong in damage, have many advances over other guns and is fun to play because how random the projectiles are. I just recently signed up so I can’t share my thought, but I hope IA don’t change how the guns work.

It’s strong against chickens, yeah, but that’s about it.
And considering the increased amount of tough enemies in ciu(especially the mini-bosses), it’s not so great anymore. In ci5, it was nice because most of the levels consisted of chickens and chicks. But that’s not the case in ciu for higher difficulties anymore.

Notes: I didn’t change the “bio” designation. Manual DPS @ power 10 is 20K, so some weakness against metal is probably useful in avoiding OP.

some weakness against metal is probably useful in avoiding OP.

Can we know if popcorn have any hitbox difference than kernel?

I will assume that kernel’s is 20px instead of 0?

Kernels don’t have a radius

So this means either one of two things, right?

Kernels don’t have a radius

In the engine, fast-moving projectiles collide as 2D capsules.

Kernels have 0px radius, so the capsule degenerates into a line.