Boron Railgun was first introduced in 4th episode of Chicken Invaders as a replacement for CI3’s Vulcan Chaingun. Just like other machine guns right now, it is severely underperforming in CIU. On top of insufficient damage output, Boron Railgun also has number of other problems. As always, in my post i am going to present my thoughts on how it could be fixed. The issues with Boron Railgun are:

Let’s go back to the Boron Railgun and its issue nr 3: unnecesary additional power level at 11

. I suggest dealing with that in the following way:

Such simple change would basically move current power lvl 11 on lvl 10. It may seem unnecessary, or unimportant, but having all weapons follow the same structure of power progression can profit in the future. For example, if some new feature regarding weapons’ power levels is added, having one gun with more power levels than the others may break things a bit and of course we want to avoid that.

With issue nr 3 covered it’s time to deal with problems nr 1 & 4: Boron Railgun’s insufficient damage and the fact that it is unoriginal and too similar to other machine guns in the game. To deal with those two problems I have come up with a mini-rework for Boron Railgun that includes highly requested “overheat based damage modifier” feature. I suggest to do such mini-rework in a following way:

Below you can see how damage and projectile color would change: 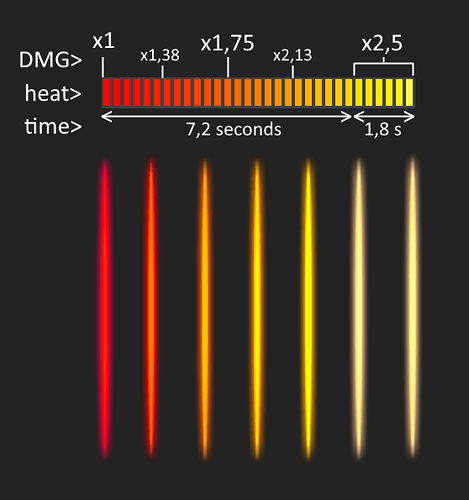 Such mini-rework should make Boron Railgun a really powerful, but also skill requiring weapon. Being able to deal up to 20400 DPS, it would become the weapon with the highest firepower in the game. However to effectively use that insane firepower, player would have to watch heat meter very carefully to not let weapon heat reach 100% or drop below 80%. After such changes, Boron Railgun would be excellent for very skilled players that want to maximize their damage output by using wepon that is more difficult to use than others. However for more casual players, Boron Railgun would still be probably a viable choice. Keeping heat bar just above 50% should provide enough firepower for Boron Railgun to be useful all-purpose weapon. On top of that, such rework would make Boron Railgun more distinguishable from other machine guns, and a more unique weapon in general.

It is also worth to note, that thanks to heat based damage modifier, such rework would make Boron Railgun the first weapon that doesn’t benefit from reseting heat bar. So to prevent any unpleasant interactions with some game mechanics I suggest additional changes:

On top of preventing unpleasant interactions with other gameplay elements, such changes could also make it easier for new players to understand how this gun is supposed to be used. (In case they don’t read Boron’s description in the shop.)

All that should make a Boron Railgun objectively better weapon than Moron Railgun, so the problem 2 would probably fix itself. However, I think that we can change Moron Railgun in such way, that it will prevent this problem from ever emerging, even if Boron Railgun was significantly nerfed later. My suggestion is simple, but should be very effective. I think that Moron Railgun can be improved in the following way:

Here you can see results of all proposed changes:

To summarize, I think that Boron Railgun could be improved by:

And Moron Railgun could be improved by:

So yea, that’s it for now. Remember to share your thoughts in the comments below. If you think, that I forgot about something, or you have a different idea, feel free to tell me. I am interested in all kinds of feedback. Soon I will make a post about next weapon, so stay tuned.

PS: Overheat based damage increase was probably the most requested feature by the community since I started the WBP. People suggested it for many weapons, but at some point I said that I want to give it to Boron Railgun, because I have a big reason for this. The reason is the real-life heat colors and how well they fit both guns. Weak Moron Railgun being red and strong Boron Railgun being bright yellow ideally matches how real heated metal changes color.

Especially when it comes to the things like Heavy Bomber and its volley generation.

Heavy bomber never reaches even 10 power. It only goes as far as 2 pillars with 9 firepower at 26 firepower,so whether or not power level 11 gets moved to 10 or not doesn’t affect this ship,at all.
But everything else is fine. Great post,as always

I know, I meant things similar to Heavy Bomber’s volley generation that may come in the future. (I elaborated later on that.) I will edit that part to not cause any confusion.

Regarding the irregular amount of power levels, I remember iA saying that future weapons could also have more/less power levels than the standard 12

No need to be sorry. Even small mistakes and problems should be fixed. I want my posts to be as quality as it’s possible, so if you find anything like this in the future, remember to let me know.

Regarding the irregular amount of power levels, I remember iA saying that future weapons could also have more/less power levels than the standard 12

I know that and here I briefly explained why I think it is a bad idea. I think I will elaborate on that in my final post too.

So the new Boron is the opposte of Universe Vulcan.I like it. In my opinion more weapons should have changes based on the heating mechanic. It gives more “usfulness” to one of the best features in the game!

It gives more “usfulness” to one of the best features in the game!

You spelled “most annoying” wrong.

Don’t worry, someday you will see corn shotgun shoots popcorns as the heat increases, if my idea is implemented.

Based on @1galbatorix1’s idea to make boron railgun has special effect (in this case damage depends on heat level) while its noob version doesn’t, I think it would be great if more (if every is not possible) weapons have special effect too and have their noob counterparts that don’t have any.

Hmmm idk about that. Don’t you think that having one “noob gun” is enough?

Though I don’t know,maybe a mechanic other than overheat could be introduced for other ships?https://forum.chickeninvaders.com/t/energy-based-weapons-only-spaceships/4689/8
(shameless self advertising)

mechanic other than overheat could be introduced for other ships?

I know… I know… This topic has a similar name to another but how do you call it? Anyway… Share here your new spacecraft concepts I start with 3 and my vew on an announced one: 1)Scarab (cost:3600 keys) [Screenshot_2019-07-09-21-23-24] Satellite pods:2 Bigger hitbox This spacecraft has 2 satellite pods and a unique ability: radioactive field Radioactive field: The spacecraft has a radioattive area that deals 100 dps and starts with “half darkness mission light” radius 2)Singularity (co…

This was the topic
I tought that I shared Hellburner (The kamikaze ship) there but not.
I have so much ideas for spacecraft with abilites. Maybe I will make a “topic series” with some maths like WBP or WHP

Well,do me a favor and add mine to that list and expand on it,if you would please.
Will not come back to claim credit.

Update: It seems that I have less and less free time to work on WBP because of new school and other things. WBP is not cancelled in any way, but I have to inform you guys that time between my upcoming post may be even longer than previously. I am not able to tell how much time it will take me to make part 9, 10 and 11. It may be a week, but it may be 3 weeks aswell. I don’t know. I understand that many people are waiting for my new posts, but right now I have other RL things to do.

So yea, basically WBP is going on a hiatus.

Take as much time as you need, real life is not negotiable.