Hi guys, it’s me galbatorix. I have been radio silent for very long, so I think it’s high time to finally make an update post about me and my “CIU weapon balance program”.

For those of you who may not know me, I am creator of fairly popular post series on forum called “CIU weapon balance program” or simply WBP in which I propose detailed solutions for balancing various CIU weapons.

So yea, the WBP has 8 released parts of 11 planned. (excluding introduction). Parts 9 and 10 were planned to be about Corn Shotgun and Lightning Fryer respectively and part 11 was planned to be the summary post with some final thoughts about the whole subject. Because of how time consuming the project was, I wasn’t able to make last 3 parts on time (before my vacation ended), so in early october when I went to the new school I decided to go on hiatus, till i get used to my new situation and have more time to get back to the project. But as it turned out, new school(one of polish medical universities) turned out to be an unbelivably shitty place where we have to LITERALLY memorize whole books page by page. (And on the first day our rector said we should quit all our hobbies immediatelly if we want to pass an exam what later turned out to be painfully true) This unbelivable amount of 24/7 cramming is the reason why I was radio silent for over a month.

Because of all this, I have a serious problem deciding what to do with WBP now. Unless I quit my current school(What I am seriosly concidering at this point) I won’t have enough time to finish the last 3 parts , but I also don’t want to quit the project now. I am really happy with what I made so far and I think letting it go at this point would be a massive waste. So for last couple of days I have been thinking about what to do with all this, and I have come up with few possible solutions to this problem. I will list them down below.

A) I will make parts 9 and 10, but without the usual in-depth analysis and extensively explaining my thought process. Then part 11 as planned, as a wrap-up to the whole series.

B) I will skip parts 9 and 10 and get straight to the part 11 (In such scenario I would release my calulations for Corn Shotgun and Lightning Fryer toghether with that part 11, and maybe someday if I have time for that I can write parts 9 and 10 later on after the series is complete)

C) Remain on hiatus until I can get back to WBP (Which is likely going to be next vacation unless I decide to quit or something else happens. It’s also worth to note, that after such long amount of time I may not remember all things I originally had in mind)

D) Cancel the WBP without planning to get back to it later on. (The scenario I want to avoid, but it is still an option.)

So yea, those are my 4 ideas for what to do now, but I don’t know which one is the best one, so my question is: what do you think about it? What scenario seems the best for you forum users? (I expect either A or B, because I kind of count C and especially D as an “last resort” options) I am also interested in an opinion from the IA studios themselves.

I think that’s it for now, tell me your thoughts about it. If opinions vary too much, we can always discuss it a bit or make a poll or something.

Dunno why,but I kinda feel like C would be the best option. Tied with B),maybe. I liked the fact that the program was always so in-depth

Definetly option C is the way to go. Take as long as you need.

Take your time. I vote for C.

That must be the stupidest thing I’ve heard this week. Why should college students quit their hobbies to succeed? And why is it such a mystery when so many of them decide to drop out due to these ridiculous circumstances? I most certainly don’t underestimate education, but it must not get in the way of hobbies and creativity. What do you think people appreciate the most? Art, of course. Isn’t that what draws the line between humans and the rest of the animal kingdom, apart from our consciousness and self-awareness?

Unless I quit my current school

If there is an option to enter a better school, go for it. I don’t see the point of leaving your hobbies aside just so you can have time to do tremendous amounts of homework and study for exams all the time.

Without the usual in-depth analysis, this will no longer be the weapon balance program we all know and love. I wouldn’t vote A) if I were… anyone in this forum.

I pick this option, and it seems that everyone else agrees that you can take your time and get back to WBP when you have the strength to do it. If you have trouble remembering ideas, consider writing them down on a piece of paper or a text document and rereading them when you’re free.

We can’t afford to lose this program, this choice is a big no-no.

Basically, take your time to get used to everything and finish the project when you can.

I say C.
And your University sounds like an Indian school(Of which I am unfortunately a student).I feel you,man.

So while I share the same opinion as Sufi2425 I still had one question and since I stopped my silence I guess it’s good to ask.

Why exactly do you consider that? Did you have different expectations about all medical schools or do you think about changing the profession?

I’m glad I decided to ask you guys about this, because as it turned out, my predictions about what people may want were kinda wrong. It seems that option C is unanimously agreed upon. Though it comes with the certain risks (any future major gameplay change may affect the WBP in some way or another), for now it will be the way to go. So WBP is going to remain on hiatus, till I can get back to working on it. Thank you guys for sharing your opinions.

And to answer some questions:

Why exactly do you consider that? Did you have different expectations about all medical schools or do you think about changing the profession?

I think about changing profession. Going to polish medical university was a mistake on its own and I could have avoided that, but I fuck’d up. I was kind of under family pressure and I didn’t make enough research to realize that it’s not going to work. From what I know now, other medical universities in the country ain’t better. Most of them are said to be even worse than mine. Same goes for non-medical studies that are run by those universities, aparrently they are even worse than medical studies themselves. So I am going to avoid them.

I am looking for something where I will actually need to use my brain cells and math skills, because where I am right now thinking logically is an unwanted trait. (Our chemistry teacher doesn’t even know what he is talking about, because he just memorized everything without any understanding whatsover… which is so damn sad omg)

Math/physics related studies are an option. I’m also seriously concidering various forms of I.T. I am currently doing extensive research about them(Not gonna make the same mistake again), so I haven’t decided yet.

And your University sounds like an Indian school(Of which I am unfortunately a student).I feel you,man.

If that’s the case, I feel you too bro.

That must be the stupidest thing I’ve heard this week . Why should college students quit their hobbies to succeed? And why is it such a mystery when so many of them decide to drop out due to these ridiculous circumstances?

Because they don’t get money for graduating students, but for accepting them on the first year. Why would people working at university waste their prescious time on giving a shit about our education, if they can just tell us to “LEARN EVERYTHING” and only make exams for us. 2nd year has around half of the 1st year’s places, so the massive quitting/not passing exams is expected. (Duh, when I wrote it, it seems even more terrible than when I was thinking about it.)

WBP is going to remain on hiatus, till I can get back to it. I may try to slowly make some episodes, so it may happen that part 9 randomly appears or something. We will see. I think that’s it for now. Again, thanks for feedback and see you (I hope as fast as possible) under then next part of WBP.

Sorry for writing an unrelated reply, but you seem to have disabled PMs

I just wanted to tell you to simply call me Sufi.

I am looking for something where I will actually need to use my brain cells and math skills, because where I am right now thinking logically is an unwanted trait.

Accountancy, maybe?
Seeing you doing WBP.(and with all those spreadsheets and analysis/interpretation) could fit you to this.

can i ask sth how do u make a topic

Have you tried programming? There are many different branches - game development, software development, etc. It doesn’t necessarily require mathematical skills unless you have to write complicated functions, especially functions with parameters, but iron logic is definitely a thing you’ll need, and I assume you have that (points at literally any WBP post).

can i ask sth how do u make a topic

Off-topic, but I’ll still give you a helping hand @Hello 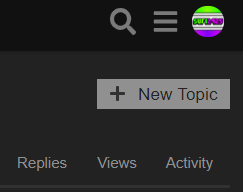 Click the [+ New Topic] button which should be right below your profile picture on the home page.