Currently Lightning Fryer is one of three auto-aim beam weapons in the game. It was first introduced in CI3, where despite its flaws it performed arguably decent. However right now in CIU, Lightning Fryer seems to be a really underperforming weapon, that can’t keep up with enemies’ heath on higher difficulties, where waves with multiple metal chickens/chickenauts are common. Unfortunately, damage is not the only problem this weapon has. Certain other characteristics of Lightning Fryer make it pretty lackluster weapon as a whole. As always, in my post i am going to present my thoughts on how it could be fixed. The issues with Lightning Fryer are:

As you can see, there are couple things really messed up about this weapon’s design. As a whole, Lightning Fryer’s gameplay and power progression seem pretty lackluster and badly designed. It deals unusually small amount of damage on all power levels except max power. (That said, even on max power, most weapons still deal much more damage than Lightning Fryer.) There are also some other minor problems such as beams dealing 495 damage on 10

instead of whole 500, but I decided to not include them in the main list, because they aren’t impactful enough to fit there.

After thinking about this weapon for some time, I came to the conclusion that Lightning Fryer deserves to be completely redesigned from scratch. Without the extensive rework it would be really difficult to fix all those bigger and smaller problems this weapon currently has. I came up with an idea how such rework could look like. I suggest to rework Lightning Fryer in a following way:

Here you can see the visualisation: 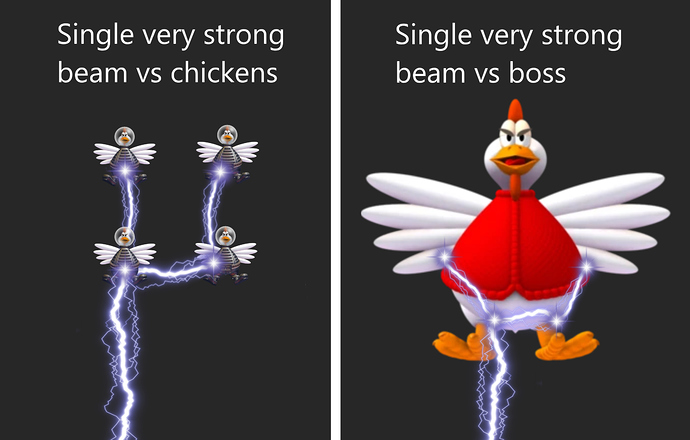 , which is similar to Utensil Poker’s DPS on that power level. It may sound too strong, however it must be noted, that each target can be hit with separate chain only once, so the most damage single target can take is 7500 DPS, assuming it is hit by all 3 very strong beams at the same time. This makes suggested Lightning Fryer rework a weapon that is able to do huge amount of damage to group of enemies, but is unable to qickly kill single target, which comes with some disadvantages. Especially on waves such as “Nasty Surprise”.(Bosses are an exception to this rule and they will always take whole 18000 DPS.) Reworked Plasma Rifle, despite dealing 3000 DPS less, could still be a more desirable choice for players who prioritize ability to kill single enemies faster over higher total DPS.

On top of that, proposed rework would give Lightning Fryer actual projectile types with constant damage values, so wider beams being weaker than thin beams would no longer be the case. Changing automatic fire rate to 10 shots/s also makes reworked Lightning Fryer a fully automatic weapon instead of what we have now. All things considered, I think such rework would make Lightning Fryer a weapon much better suited for the game like CIU, and possibly more fun to use thanks to “chaning between targets” mechanic.

Here you can see results of proposed changes: 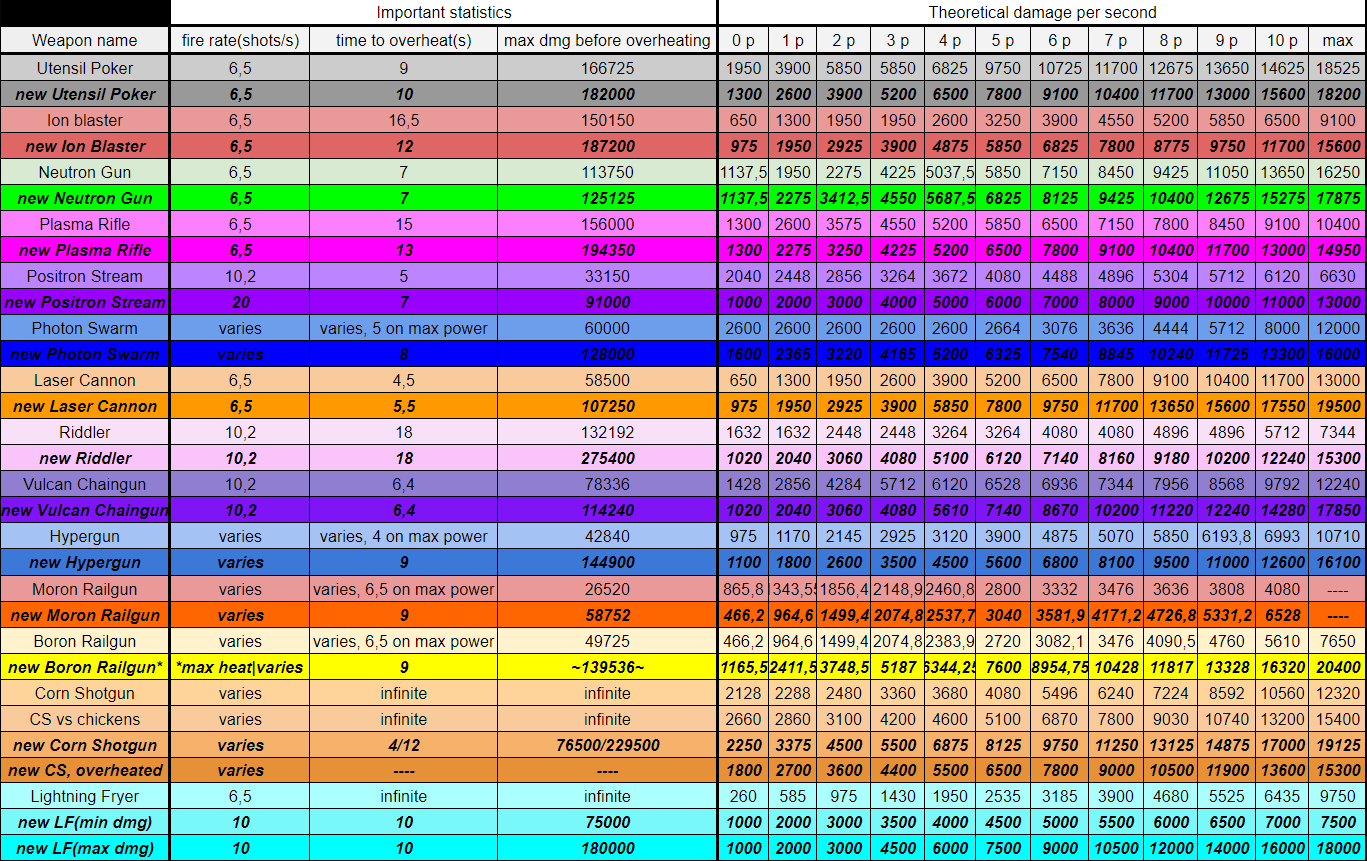 That said, despite my calculations and thought process I have to admit that it’s really hard to predict how this weapon would actually perform in game. Usually when designing reworks, I compare my ideas with what we currenly have in game. In this case I could’t really do that. Ability to chain between targets is an entirely new mechanic that right now doesn’t exist in game in any shape or form. It’s possible that this mechanic is slightly stronger/weaker that my reasoning leads me to believe, so if IA decides to implement WBP, I will be ready to design potentially needed changes to this Lightning Fryer rework. (Of course this may be the case with other WBP ideas, but I am mentioning this here, because this idea is more likely to need some improvements in the future.)

So yea, the WBP project is almost over. With all weapons covered there is only one part left, in which I will summarize the whole WBP and talk about other weapon-related things that I didn’t cover in the previous posts. (Such as weapons’ price in shop, weapon virtuosity etc.) I know it took me a lot of time to get back to WBP, but now I am back, so new post should appear pretty quickly. I will probably release the last part till the end of March. And once again, thank you for your patience, I hope the wait was worth it :>

Anyways, that’s it for now. Remember to share your thoughts in the comments below. If you think, that I forgot about something, or you have a different idea, feel free to tell me. I am interested in all kinds of feedback. And stay tuned for the grand finale

Oh yea, the ultimate Space Race weapon! Really digging that chaining ability, I hope it works out as you planned. Super hyped for the finale!

It’s a while since I have posted something here (did anyone miss me? I don’t think) but I will still say my opinion to this rework.

The chain mechanic actually sounds good (While the part when hits bosses multiple times makes little sense but [insert big fan here]) and would actually give to my favorite weapon a good prupose.

WBP project is almost over. With all weapons covered there is only one part left, in which I will summarize the whole WBP

Let’s don’t forget that developers will actually say their opinions over the entire project there!

Only question now is this: How hard would it be to implement all these weapon balances?

If it’s just the matter of tweaking the variables in game engine then not hard at all.

How hard would it be to implement all these weapon balances?

Most of them should be very simple, few of them however (like Corn Shotgun, Photon Swarm and this one) may be more difficult to implement.

Damn, how do you manage to think of these!? All off your rebalances are absolutely pecking perfect!

Don’t forget it would be huge improvement vs shielded bosses like Bossa Nova and Asteroid Chicken, and mass-spawning boss like Egg Cannon and Henterprise.

how do you manage to think of these!? All off your rebalances are absolutely pecking perfect!

I am glad you think so.

To answer the question: I think it is thanks to bunch of things combined.

Part of that is definitelly the experience. I am typical “gamer”. I played a lot of vastly different games ranging from ones like Geometry Dash, Chicken Invaders through farming games like Stardew Valley, to MOBAs and various types of single/multi player shooters. In all those titles I have seen tones of good a and bad weapon designs and other abilites. When I was young, there was even time when I was slightly obsessed about browser Shoot em up games. (CI 3 had a big role in that)

Besides that, there were some other games that gave me tones of ideas. Notably “Borderlands” series and one niche space shooter called “Star Conflict” (sadly, it’s now fully Pay to Win and pretty much dead). Especially the last game was an “idea powerhouse” for me. Number of creative weapons in that game was insane. Besides standard lasers, blasters and machine guns there were weapons that deal more dmg or fire faster projectiles when close to overheating, weapons that generate huge balls of slow moving plasma, lasers that slow down enemies or make their armor weaker the longer you fire at them, and so on. So thanks to that game I had huge base of possible weapon ideas for my reworks.

Another thing that strongly contributed to the WBP was the fact that I played League of Legends and lately Paladins and I was/am very invested in the balance of that games, how it’s handled and statistics around it such as champion win rates. League of Legends also does many more or less succesful reworks to their characters. Seeing how those games’ balance and reworks are handled gave me some understanding of what to do to rework/buff/nerf something without it causing problems and making the community upset. The biggest thing I learned from LOL’s reworks is that when you want to improve something by reworking it, you should improve what needs improvement and leave what works untouched. (I hate how Boron Railgun’s fire rate changes, but since it isn’t what causes the problems, I decided to leave it untouched.) And above all else, avoid changing gameplay identity of that thing(champion, weapon, whatever). Another thing I learned from those games is that popularity=/=effectiveness in vast majority of cases.

So yea, theoretical experience from other games is one thing, the other thing is that I am naturally pretty creative person. I am an amateur writer and love coming up with cool stories, imagining things. I am also pretty good at math and solving logical problems so that probably helped me with WBP too.
My posts usually display my thought process. First I am looking for problems with a weapon. Then I am trying to identify what causes those problems. Then i think about how each of those problems could be fixed, and if I can do something that fixes more than one at once.

Gosh, that was a long answer. I think it was worth it tho. It always feels good to say something about yourself xD

Don’t forget it would be huge improvement vs shielded bosses like Bossa Nova and Asteroid Chicken, and mass-spawning boss like Egg Cannon and Henterprise.

Yeah. I think this LF rework has huge potential. But it also worries me a bit, because I can’t predict how excactly would it affect some of those bossfights. It might be needed to make LF act differently for those special bosses, cuz it may turn out to be too strong or too weak.

Have you noticed how the fryer gets bigger as it travles? How about it getting ablittle itty bitty stronger while doing that!

That’s not how electricity works

Yep. So it gets weaker? Because that is how electricity works.

I don’t think “realism” should influence gameplay design at all. Especially in game like CIU.

Dealing more damage at the distance sounds interesting, but I don’t think it fits Lightning Fryer all that well.

Update: When working on my summary post I noticed that Positron Stream is still kind of weak on latest power levels. So I decided to change that and give slightly more power to its 10

, so it isn’t as significantly behind all other weapons. The new value is only 1000 more DPS on 20

, so it’s not that big of a deal, but I think I had to adress that in some way.

Original post was edited. I will not edit the comparison chart that is on all other posts though. Too much work for something not so important. However, updated chart will appear in the summary post .