Please read the entirety of this post before using the tables or commenting on the changes proposed.

This post contains rebalance/rework sheets based on IA’s excel file. They contain various changes made to almost every weapon. I’m sharing them in this post so that others can test them as well. I’ve discussed these reworks with galbatorix, and we think they’re reasonable.

Now, before some of you start screaming at me for daring to touch the overheat values: overdrive is supposed to allow us to balance the formerly manual weapons with the formerly automatic ones. Yes, the slow firing weapons are harder to use, which is why I’ve given them a slightly longer overheat time than I would’ve otherwise. All the overheat changes I’ve made I tested thoroughly to make sure they at least feel right to me.

With that out of the way, let’s go over the changes I made.

This change brings the max power damage jump down to 24,7% and makes it consistently stronger than Utensil on all power levels. 8,5s overheat time is to counterbalance the 19,3k DPS.

This change brings the max power damage jump up to 22,4% and reverts its previous 20k DPS and overheat time.

This change increases the rate of fire to make the weapon more usable. It also brings the max power damage jump up to 24,9%.

Not much changed here, just a slight buff to overheat time to make it more manageable.

No changes so far.

This change rebuffs Utensil’s max power level and brings the max power damage jump up to 25%.

Modified version of the WBP progression, bringing the low level DPS down to a more reasonable level. The max fire rate has been halved to comply with the recently discussed technical limitations.

A new progression, based on the WBP 2.0 one, revamped to keep the current rate of fire. It relies on the chaining rework that I first mentioned in my Plasma and Positron post.
Overall, the point of the rework is to make chaining more reliable. This could mean making it proximity-based instead of angle-based, or the bouncing could be made (way) more lenient. The exact way this is done is not massively important, as long as the weapon can reliably reach 17k to 17,5k average DPS on max power in most situations.

Another problem with the current verison of Lightning Fryer, is that it’s underpowered against bosses. To fix this, we propose further tweaking the chaining mechanic in the following way:
When a lightning bolt hits a boss, as long as there are more chains available to it, it connects a second time with the boss (after which it can keep chaining to other targets) at a random spot at the edge of the boss’s hitbox (some limitations will probably have to be added for bosses with hitboxes that mostly reside outside of the screen (Yolk-Star™, Henterprise, etc.). This effectively gives Lightning Fryer a x1,5 damage multiplier against bosses. 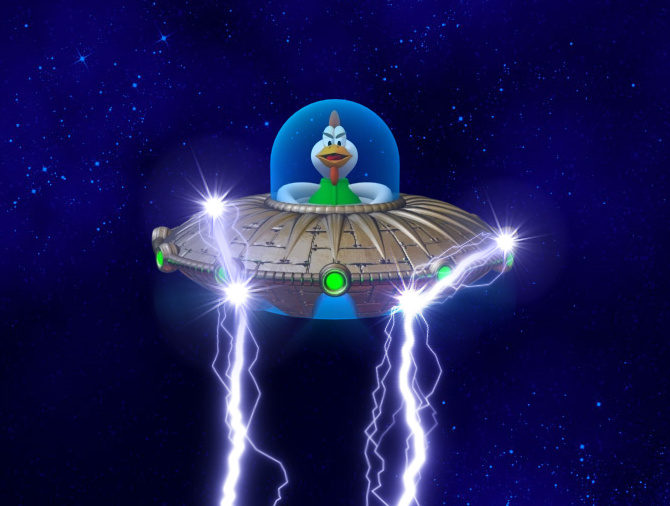 I have one more important thing to say about mechanics like chaining: making these mechanics more “intuitive” (like the recent changes to splitting) doesn’t help. This is because the player largely has no control over the positioning of the enemies. At most, the player can position themselves in a way that will guarantee a single chain or split, the rest is out of their hands. Therefore, it’d be better to make chaining more effective overall, rather than making it easier to manipulate.

Readjusted version of the damage ramp progression, with the max power damage jump bumped up to 22,7%.

Yes, we could attempt to increase its base damage and further lower the damage of splitting, but I’d at least like to see this in action. Like with Lightning, Positron Stream’s base DPS is quite insufficient for bossfights. The issue is that even with its low base damage, the splitting is absolutely overkill in its current state. The weapon (and Lightning too, to a lesser extent) currently attempts to deal with the unreliability of the splitting mechanic by having an absurdly high max damage output, which doesn’t exactly lead to consistent performance.
So once again, I’d like to suggest scrapping splitting and giving Positron Stream damage ramping instead, leaving the “crazy beam” factor up to the visuals.

Now of course, I can’t modify the weapon to include ramping. However, I am going to include a version of Positron that attempts to emulate it in my spreadsheet. The beam damage is set to the average damage of the base and max values, and splitting is disabled (or rather, its damage is set to 0). This of course doesn’t produce completely accurate results - in some cases the weapon would deal more damage, and in some it would deal less. That being said, I think this version is effective enough and gives a pretty good idea of how the weapon would perform if it were reworked in this way.

Readjusted WBP progression, bringing the low level damage down to a more reasonable level, lowering the max power damage jump down to 23,5%, and significantly increasing the overheat time. It should also be a lot more usable on

8-10 than the current version.

A slight, but in my opinion needed mid power nerf. This progression brings it more in line with Hypergun, and brings the damage jump up to 24,4%. I thought about increasing the firing period on max power up to 0,097, but I decided to leave it as it is for now.

As long as its not strong against regular chickens, this should be fine.

Edited WBP 2.0 progression. The uncharged beam is now stronger, and the full charge time is 1,4s instead of 1s. This is due to the possibility of introducing overdrive for this weapon. Additionally, if the damage stages are replaced with a smooth increase like in Boron’s case, the weapon might become flexible enough to the point where it might not necessarily need a base 1s charge rate. This is just a theory, as the spreadsheet doesn’t allow for changing Absolver’s firing intervals, and therefore I don’t have the ability to test this.

This rework relies on IA implementing the piercing rework detailed in the WBP 2.0 post. Nevertheless, the values are included in the spreadsheet for those who are interested.

So, what is actually in those spreadsheets?

Due to the way some of the weapons are coded (?) and/or due to the limitations of what we can actually tweak using this excel sheet, some of those reworks are technically impossible to test properly. This includes:

Neutron Gun, Laser Cannon, Utensil Poker, and Riddler: since they use a constant firing interval, testing them on

20 is impossible
Hypergun: because we can’t edit volleys using the spreadsheet, testing it on

To get around this, I’m including two files in this post:

Sheet 1: This includes all reworks that can be fully tested (including Corn, just bear in mind that testing it against regular enemies might not produce accurate results), as well as the base for Neutron, Laser, Utensil, Riddler, and Hypergun (

0-10). Included are also the values for Lightning, Positron, Photon (the probability is included separately from the volleys in an additional Misc. tab at the end) and Absolver. (Note that these values are not there for testing in-game, they’re there for IA to use if he wants to follow my rework suggestions)

Sheet 2: This includes the

20 values for Neutron, Laser, Utensil, Riddler, and Hypergun. To test them you’ll have to end session once you reach

20 and then swap the file out for this one. This sheet also includes a Lightning boss chaining test (damage multiplied by x1,5 for B1-B3), the aforementioned Positron test, and an approximation of the Photon rework (as close as I could’ve gotten with the same damage values. Though this approximate progression is objectively terrible, it should give you a decent idea of how the actual rework would perform).

All weapons in this sheet have overdrive enabled (aside from Absolver, which currently does not support it). Moron is set to 33,3% and everything else is set to 50%.
In my opinion it could easily stay like that, as long as some limitation is introduced (like giving it a cooldown and making the available duration depend on the reactor).

Follow the instructions detailed in IA’s post (📊 Weapon data spreadsheet). Bear in mind that you’ll have to rename the excel files (by removing the ‘S#’) for the game to accept them.

Note that I’ve changed the way some data is marked:

Also note that the FiringInterval table is, in cases of weapons I’ve edited, decoupled from the values located to the right of it. If you want to work on your own changes or tweak these and would like to see the end result in the charts, I’d suggest using IA’s original file.

And that’s it. If you have any questions or suggestions regarding these, let me know.
(Also tell me if you find any discrepancies between this post and the sheets, so that I can fix them ASAP.)

I’ve made some changes to the engine to support some of these suggestions, an I’m going to start tackling them now. It’s a multi-faceted undertaking and it requires several passes on my part, so I’m going to use this topic as a scratchpad as I go.

I’ll unlock the topic once I’m finished. Until then, do not rely on any information you see here as being final.

Overheat time: Done
Damage: Done, but a +20% boost has been applied to compensate for less-than-expected buff (due to instant chain extension). Must collect updated impressions. Hopefully tweaking a combination of base damage multiplier and “multi-hit penalty” will be sufficient.

Overheat time: Done
Damage: Done
Ramping: Not yet. Progressive (delayed) splitting provides an approximation of ramping. Will revisit in v.54

See: On the subject of Plasma Rifle and Positron Stream reworks

This rework relies on IA implementing the piercing rework detailed in the WBP 2.0 post

See(?): On the subject of Absolver Beam rebalance

All weapons in this sheet have overdrive enabled (aside from Absolver, which currently does not support it). Moron is set to 33,3% and everything else is set to 50%.

Done, but incomplete. Will collect data over the coming month to decide about cooldown/overheat acceleration/other mitigating mechanics.