I am releasing the weapon spreadsheet for anyone who wants to scrutinize/analyze the data. I think this will help establish a baseline for communication, as well as avoid unnecessary duplicated work. There’s information in there about projectile damage, volley damage, firing intervals, time-to-overheat, DPS, and destruction-until-overheat.

Starting with v.51, weapon data can now be overridden by an external Excel file. This capability is aimed at advanced players who want to experiment with different weapon characteristics in a sandbox environment. It is not meant for casual users. I will provide limited support in cases there are problems, but only to people who seem to know what they’re doing.

When it comes to actual editing of the file:

The Excel file can be found here: http://universe.chickeninvaders.com/files/CIU-WeaponData-v75.override.xls 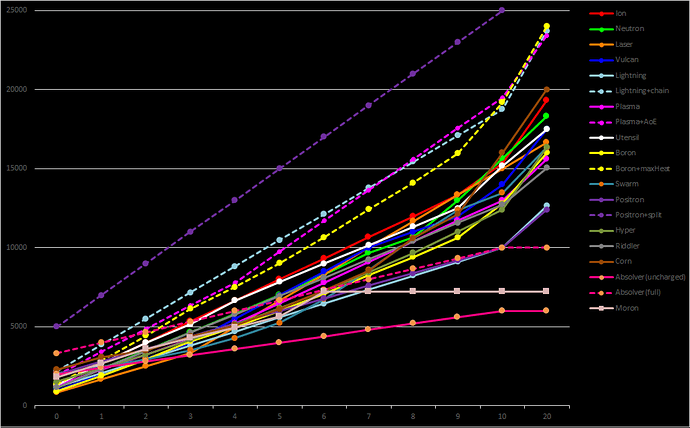 Sorry for asking, could you elaborate what split, chain and AoE means? Special bonuses?

Oh, so nothing I get permanently, but randomly when I fire it. Okay, got it.

But they are not bonuses, besides all of these are only gotten when automatically firing. unfortunately it doesn’t work with manual.

I figured that.
Wait. Do I understand it correctly? The Boron laser actually gets stronger when it is at max heat?
Same I noticed about the Corn Shotgun. It never overheats? What is the disadvantage of popped corn?

Yes, boron dmg boosts the higher the heat level is, about corn shotgun, yes, it fires popcorn. and never overheats. the disadvantage of popped corn is that it has reduced damage. nothing else.

Is it just me or the Ion Blaster is OP as heck?

Literally, I beat the “Hend Game Henterprise” with just Ion Blaster, but the Henterprise almost didn’t even use it’s second or third attack

What difficulty was this mission?

The gap between the percentages are large enough so it looks like it was enhanced by Superstar Hero skill.

The server will not accept any missions flown while using an external .xls – you’ll be kicked out at the end of the mission (even if you cancel it).

Does that mean that we won’t lose any mounted equipment after the mission with modded weapons ?

I tested it, and the mounted equipment is still there after reopening the game.

I just wanted to mention that I think it’s amazing how far we’ve come. I don’t know of any weapon table earlier than mine, which I clumsily made over 5 years ago.

image1629×554 69.1 KB
This was probably the original source of the 6.5 and 10.2 myths, as well as the overheat times. They lasted for an astonishing amount of time, and without good reason. They could have been easily disproved with more accurate and independent testing.
I’ve kept expanding and updating it, and now there is an official table at last, which is even integrated with the game, there is no need for me to test and crunch numbers anymore. It’s a feeling I can’t describe.
4 Likes
Why I never complete my mission?
peterexited July 6, 2020, 1:25pm #18

inter action, can you be banned because of using it too much?

Incorrect. It’s just testing. Besides, it disconnects you at the end of mission. so how would you be banned even?

oh, it thought it same as cheating in cheat engine