@InterAction_studios there’s a mistake where you can sell the gravity nullifier and heat shield and also em shield. could you please tell me why i am allowed to sell them while on a inferno & at the same time, electric planet?

I like how the settings keep resetting every single time

Because maintaining compatibility is a burden. This will be fixed once Early Access ends.

why i am allowed to sell them

Because I can’t be bothered to do special checks about this. This was also mentioned a long time ago, I think. Won’t fix.

dang it, but nevermind, i’ll live with it.

It seems that it works only if the targets are really near and you don’t fire manually.
And it doesn’t always work (especially in zoomed-out waves)

I haven’t come across any cases where “it doesn’t work”. Send a video and I will investigate. Things to keep in mind:

Thanks for the explanation.

Sadly I can’t share any video since my pc can’t record videos at a decent quality (I’m not a computer expert but I think that my pc’s records can’t reach more than 2fps, tried everything but the results are all the same).

Anyway I think that my problems were just caused by ingnorance over the new mechanics. Now that I have read it, It seems everything is working as intended.

Increasing precision won’t help so much. It will just make this bug rarer. You need a workaround to hide it.
Early Access version 34 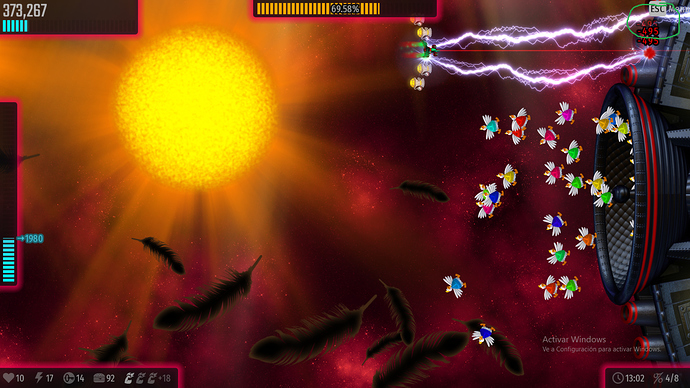 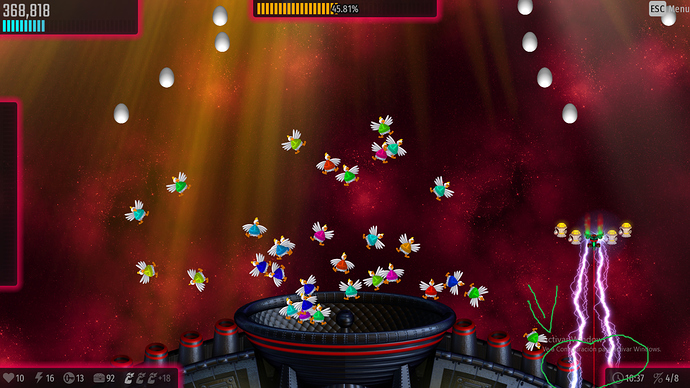 Also what’s with the insane upgrade price for Absolver Beam

I was afraid it would be too powerful to start off at 8. Incidentally, all upgrade prices are way too low for something that you get and keep forever. They’ll be increased in some future update.

471 keys for one atomic power level is still a lot when half the time, charity does the same thing. If charity didn’t exist perhaps it would be more fair.

I’d actually argue that out of all weapons, atomic power is the least important for Absolver because it tends to be either “good enough to decimate everything” or “not”. Other than boss fights (which have hefty amounts of charity anyway) it’s damage output is such that damage per shot really isn’t that important.

And the waves where it struggles, like Caught By Surprise, won’t be fixed by higher power levels, either.

(Re-suggest) The order of the satellites in the “fleet” section is still messy.This is easy to make mistakes when adding them.Can satellites of the same type be placed in the same place?(Sorry if it was done)

I’m not happy when seeing this daily: 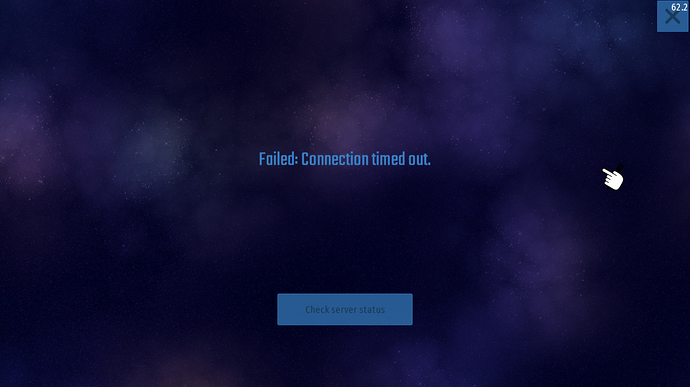 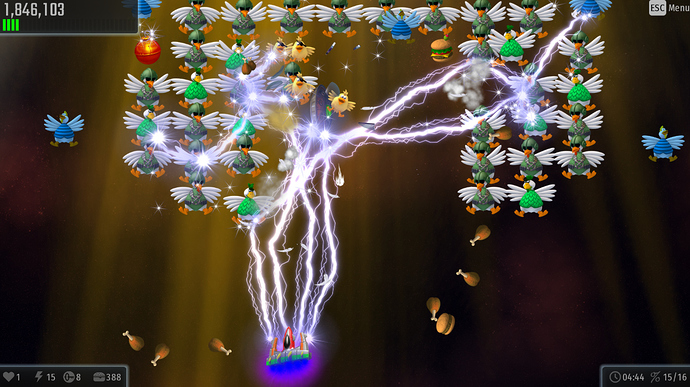 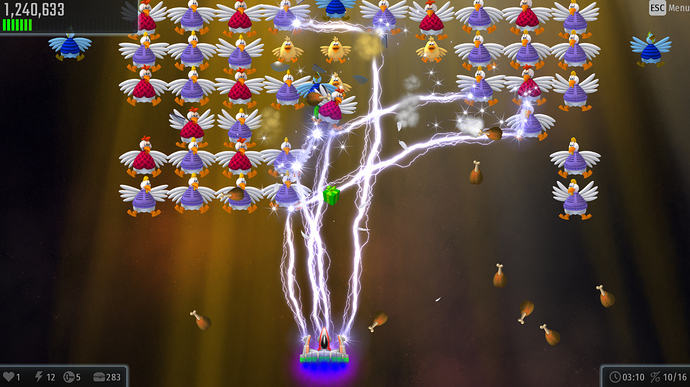 Ok, but let’s actually talk about it.
So the first thing I noticed is that chaining works differently to what I expected. I kind of just thought it would “pass through” targets as long as it was hitting something, but it’s more of an angled-bounce effect, so it won’t always chain as spectacularly as above. In many situations it was difficult to get it to bounce at all, in fact. It seems to like metal - I don’t know if that’s hardcoded or if some property of barriers and armored chickens and the like makes it prefer chaining from them. But it makes sense and I don’t want that aspect to change.
But, even though I definitely don’t understand the mechanics behind it (someone please figure it out) and I don’t know how to maximise it, it feels at least somewhat… intuitive, I guess.

The chains did seem capable of pushing kinetic objects like feathers pretty well though: 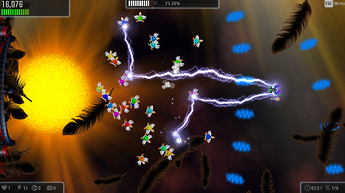 Coward Chickens will kill you unless you are ready for it - the chain means they are all hit simultaneously and as such produce a wave of white in your direction. They were especially lethal in Squawk Blocks (which, to my surprise, were actually not as good as you’d expect for LF - it seemed better for waves where hitting multiple chickens at once would be typically difficult. Stuff like Bend it like Beckhen and Chicken Roulette were easier than they usually are, as was Three-By-Three where all the chickens were really tightly grouped.)

I also struggled much more than I was expecting in a supernova. It wasn’t unusable, like, say, a laser cannon would be, but it wasn’t easy. It could not chain into the Bossa Nova from outside, but it was chaining between the invincible outside coating chunks.

It did not want to chain off comets at all (not that it needed to) but it did chain off bubbles, which was more useful than I expected.

Interestingly, it seemed to be able to chain across multiple nodes of the same boss: 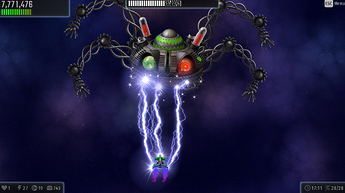 image1366×768 371 KB
This did, at a glance, appear to be doing increased damage although I really should have been using a damage indicator and also allowed me to occasionally chain attacks of the arms, dealing damage from positions that I normally would not be able to. It was a pretty negligible amount, though, and I feel like that time would be better spent letting it cooldown (which, by the way, you’ll need to do a lot - this is easily the weapon I’ve felt most tempted to overheat by far.)
Speaking of which, the mechanic where manual fire doesn’t chain is really nice and I don’t want that to change, it allows you to fire quick bursts at individual targets while it cools off and encourages hold-to-fire use that is congruous with it’s visual. 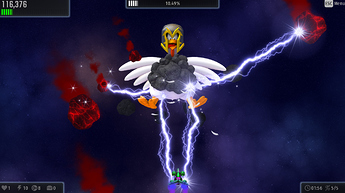 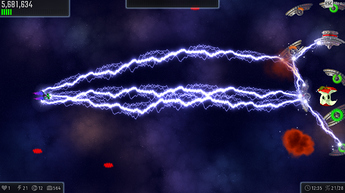 image1366×768 404 KB
I struggled much more against a Crazy Squawker (by the way, has anyone seen the “old” squawk block boss since it’s been added???) and it actually reached the bottom when I was not using my bomber (one of the few scenarios where the bomber seemed to be superior was in boss fights). Generally speaking though, LF was rubbish for boss fights, but that was to be expected, I think. 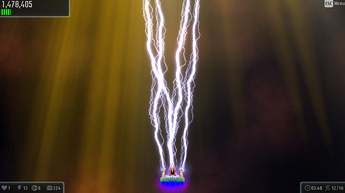 image1366×768 256 KB
Let’s talk bombers.
So, despite the images I posted above, LF with bombers isn’t all that great. It’s certainly better than the majority of the alternatives, but at no stage did I feel like I wouldn’t be better off with twin plasma rifles. In addition, getting that epic four-beam thunderstorm requires at least power level twelve - it’s definitely not worth it below that. It also obscures the screen like mad - four strips of bouncing white lightning were regularly enough to even conceal brightly coloured weapon change gifts, let alone eggs, which is a handicap the slow-moving bomber definitely doesn’t need. But this is my first bomber and I’m trash with it anyway so take all that with a grain of salt. 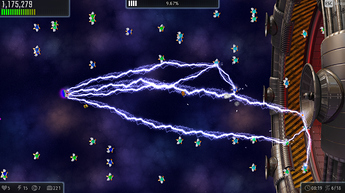 I definitely felt like the weapon was more suited to play with other spaceship types and had quite a lot of fun with it despite the fact that it’s not ideal (and I crashed a lot using it). It’s more viable now, although I’m not convinced that it’s at all balanced, and will probably only be grabbing it after I hit power level 20 (after which it was definitely a good weapon, three beams were much better!). I suspect that otherwise it needs slightly more “oomph” still. 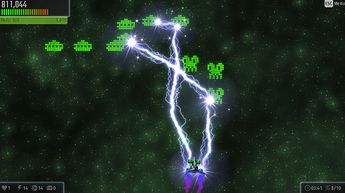 ThisIsEggcellent, i will test it tomorow if look like your images 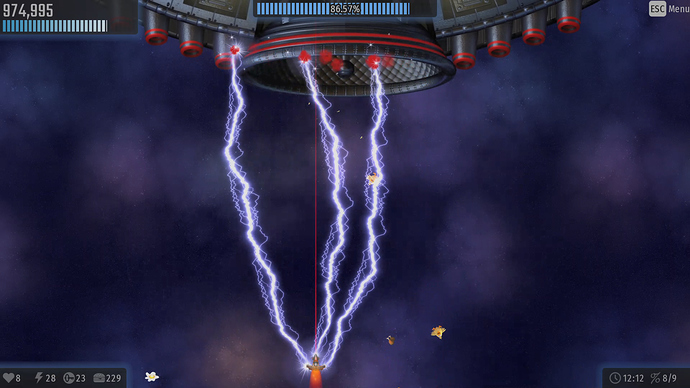 What’s a height map?I’ve been seeing it in the change logs,and as I am currently inactive,I have no idea what it means.

They’re textures. Adding more heightmaps increases the number of available texture of a planet type and generally adds more variety into the game.

It’s getting better, the only strugle is the somewhat abysmal damage. Against henterprise is a huge improvement.

Hmm…
I tested the new lightning fryer and although I haven’t had much experience with the new mechanic, I will say that due to the intentional limitations of the chaining mechanic, it’s too unreliable in comparison to the reliability of manual fire which I prefer. If the time required to create a chain was reduced, it would be more viable. This is my opinion of course, feel free to disagree.

2 Likes
Are you satisfied with the reworks done so far?
← previous page next page →