Now here’s the final part of the list, with only one guy in it?

Appearance: A Big Chicken with a Jewel Vest.
The Jewel Vest changes it’s colour to represent which attack it’ll use, which will happen with a warning. Suit turns black for 5 seconds after attack is over. Boss can only be damaged when the suit is black.
(Unless you can make it drop weapon boxes that are worth 0 points, then make it damageable only by the same weapon it’s using. It will drop the weapon it’s currently using after it’s attack has finished, so that you can damage it. But do not make the suit change to black. It will still change the weapon after 5 seconds.)

This boss will have up to 660,000 health. Lowest of 330,000
It will use one of these following attacks at random, which get more difficult the more you damage the boss.
This is balanced around 100% SSH Difficulty, nerf it as needed for lower difficulty levels.
It will never use the same attack more than once in a row.

Okay, now onto the actual boss itself.

Ion Blaster: Moves around randomly. Stops to fire 9 ion bullets towards the player either 3 or 4 times in a row for each loop. Does this 3 times. (Fires as little as 5 as health decreases, but at an increasingly faster rate. Spread will also increase so that it’s easier for bombers to dodge.)
Suit Colour: Fully Red

Neutron Gun: Moves around at random, stopping to fire 4 medium Neutrons in diagonal angles. Does this 4 times. They will re-emerge from the other side of the screen when they go off screen.
All bullets disappear 4 seconds after the 4th volley. Does not move after the 4th volley. This attack should not take longer than 15 seconds. (Up to 30% faster projectile speed as health decreases)
Suit Colour: Fully Green

Laser Cannon: Moves around randomly. Fires 12 randomly positioned lasers in a succession. Telegraphed. (Fires up to 36 lasers, starting at a speed of 3/s at max health, as fast as 9/s as health decreases)
Suit Colour: Fully Orange

Plasma Rifle: Moves around randomly, stopping to fire 4 Plasma Rifles in a + shape that will spin for 4 seconds. Spins as fast as a BX-9’s speed. Telegraphed. (Uses up to 8 at once as health decreases)
Suit Colour: Fully Pink

Utensil Poker: Goes to the middle of the screen, and fires forks in a spiralling pattern for 8 seconds, like how Infini-chicks do it. (Bullet Speed gets slower as health decreases)
Suit Colour: Grey with Black Edges

Boron Railgun: Moves around randomly, as 10 randomly positioned Boron Railgun attacks appear from the bottom of the screen. Telegraphed. Each telegraph will have 3 volleys fired at a time, only moving in a vertical line.
Bullet speed is just as fast as it is for you. (Fires up to 30 volleys, starting at a speed of 2/s at max health, as fast as 6/s as health decreases)
Suit Colour: Fully Yellow

Photon Swarm: Fires 10 photons that home in on the player. Bullets go away after 5 seconds. Boss will attempt to ram in the player’s direction when the photons go away each time, with a warning. Does this 3 times.
Bullet speed is 50% slower than a BX-9’s speed. (Bullets get faster, matching the speed of a BX-9 as health decreases. The Boss himself will also ram at a increasingly faster speed.)
Suit Colour: Cyan with Orange Edges

Positron Stream: Moves around randomly, stopping to surround itself with a positron stream ring (has a warning), and then fires 3 streams in a Y shape that split 2 times, aimed at the player’s direction. Does this 3 times.
Beam’s Direction will be telegraphed, but the splits will not be. (Fires up to 5 Streams as health decreases. 4 streams will be in a Plus pattern, 5 streams will be in an Asterisk pattern.)
Suit Colour: Fully Purple

Hypergun: Moves around randomly, only stopping to rapid fire at a rate of 10/s towards the player’s direction for 3 seconds. Does this 5 times.
(Bullet speed gets slower as health decreases.)
Suit Colour: Black with Cyan Edges

Riddler: Goes to the middle of the screen, and simultaneously fires 30 randomly aimed riddler bullets. Telegraphed for 1.5 seconds. Bullet speed is INSTANT. Does this 6 times. Refer to figure.1 for reference.
(Fires up to 60 as health decreases)
Suit Colour: Peach with Cyan Edges

figure no. 1, to give you a rough idea on what “Riddler” would be like 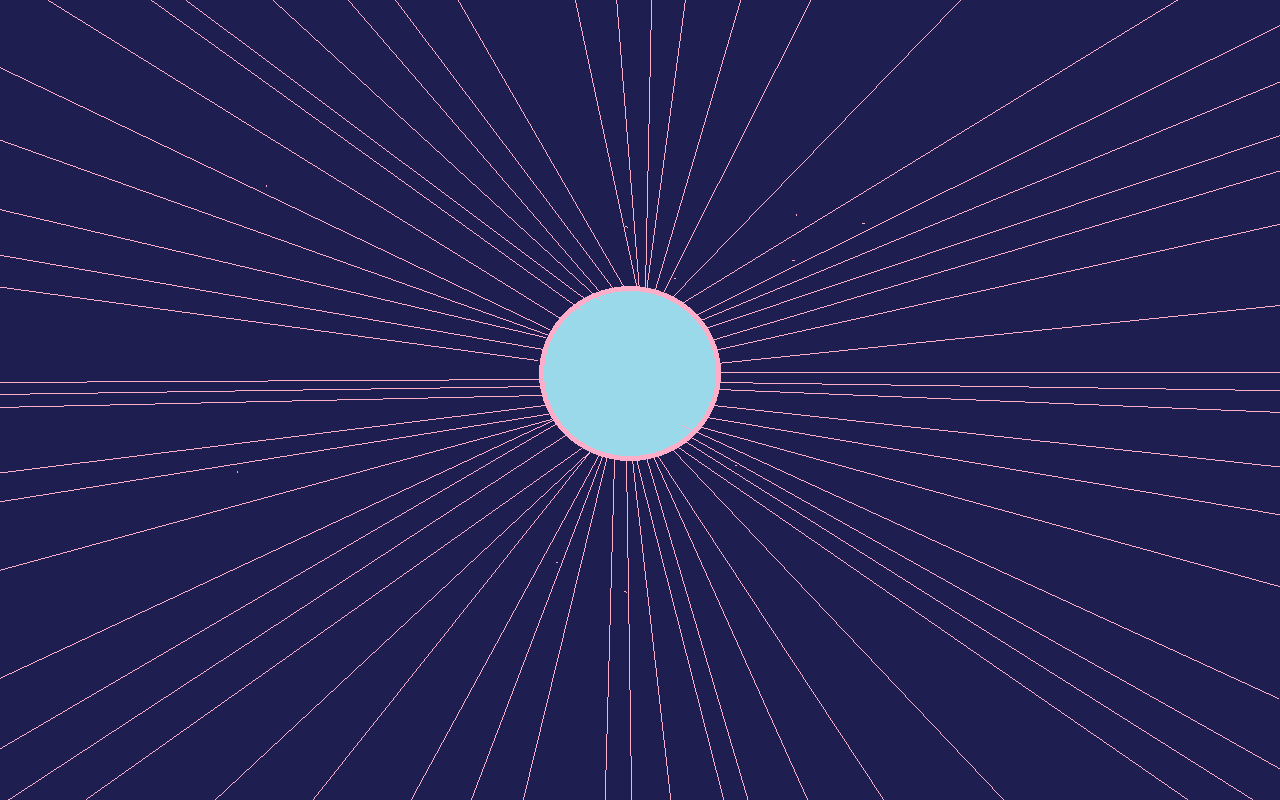 Corn Shotgun: Goes to one side of the screen, fires shotgun styled corn volleys like how egg cannonade does. Lasts 8 seconds.
(Bullet Speed and fire rate gets up to 75% faster as health decreases)
Suit Colour: Brown with Yellow Edges

Absolver Beam: Does not exist, because this would mean we’d have to add all the new future weapons to this guy if one ever comes out.

Has a 200% Zoom.
Chicken Size is as big as a Infini-Chick.
No weaknesses or strengths.
Writer’s Note: This is a reference to Miracle Matter from Kirby 64: The Crystal Shards, where it can only be hurt by attacks of the same copy ability. I thought that would be too annoying, so I made it so that this boss can only be damaged when it’s suit turns black.
Try to give this boss it’s own unique boss theme if possible.

To iA: I know this boss is going to be hard to implement, but I suggest trying to make it as best and as close as you can. A new type of “Final Boss” would be pretty nice to have, one that actually needs you to play by the rules instead of just endlessly blasting the heck out of it.

Once again, I know it’ll be hard, but I think this one might be worth trying to make. Thank you very VERY much if you do manage to create this.