It was too strong before and couldn’t even overheat at low firepower level.

Only takes into account players with 9+ hours flight time 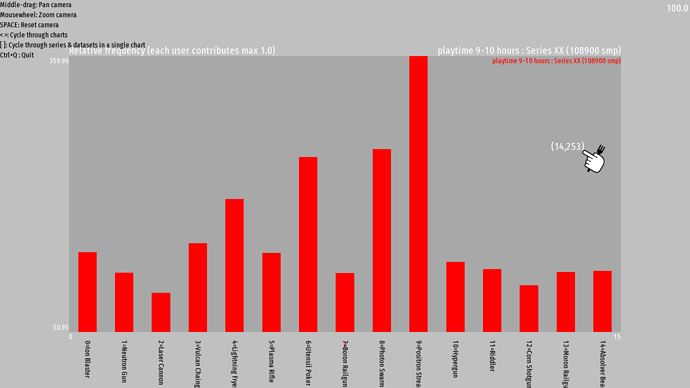 Wow, Positron as shot wayy up. Plasma still remains pretty low, but I wonder how the graph would look when taking into account successful attempts at higher difficulty levels. Also, Absolver isn’t the least used weapon anymore? That’s surprising. I think it has to do with newer players, more casual players using it because it’s more fun to use.

I’ve decided to break up this batch of reworks into two posts, since several weapons (Laser, Plasma, Positron, Absolver) will require more severe changes and I need a bit more time to cover them. Most changes in this post are simple value tweaks, with a couple of more involved modifications.

Overall damage nerf (same as previously, but with a stronger Strong projectile), slight overheat buff (though mainly to round it up to .5).

In addition to the above changes, we propose reducing Vulcan’s maximum spread to around the same level it has currently when the player has two spread condensers equipped. Such a change would improve its overall usability and stop it from being a requirement for Comet Chase missions (bring its performance in line with other weapons).

It’s possible that Plasma might need an extensive rework in the future. Lowering the AoE’s damage should make it a bit more balanced for now. The issue of its potential rework will be discussed in the next post.

Reduction in damage on

Along with Laser and Riddler, Utensil requires an additional firerate increase on max power to satisfy the requirement of a max power DPS increase in the 20%-25% range. While in Riddler’s case this isn’t particularly noticeable, I’d like to eliminate this issue in the other two weapons. For this reason I made a new max power volley for Utensil, which makes the DPS increase exactly 25%.

This is essentially a modified

We’d also like to propose applying a general reduction to Utensil’s spread (similar to Vulcan’s mentioned above), to around the level it’s at currently with two spread condensers equipped. The reason for this change is that after Ion’s volley rework during the first stage of WBP, it became more focused in relation to Utensil, making it much easier for it to dispense concentrated firepower compared to its direct spreadgun competitor.

DPS/firerate increase.
It’s possible that Photon’s high firerate will clash with technical limitations of multiplayer (as mentioned here by iA), but it should be fine for now.

We’d like to once again suggest removing Riddler’s additional spread on low power as it makes the weapon practically unusable for the first few power levels. It reduces its performance artificially, and makes it a terrible starting weapon should a new player buy it as their first.

Those are its final values for the foreseeable future. If implemented now, it’ll be a bit underpowered on high power until overdrive is reworked (and therefore can be applied to this weapon), but I think it should be implemented anyway due to the buff to starter firerate (which I’d argue is more important).

Made progression (both projectile damage multipliers and firerate) consistent with Boron, should be more usable overall due to the firerate increase (as mentioned here).

There are now essentially three levels to its progression:

The addition of overdrive was discussed in the same thread, and may be a permanent or temporary measure depending on whether or not Moron will be replaced/removed or not.

Most weapons had their low power overheat values modified. The boost was removed from weapons that have a constant hit rate across all power levels (Plasma, Positron), introduced to Riddler, Corn, and Moron, and made less severe on other weapons.

iA, is this some sort of debug/dev mode inside the game?

Small update/revision while we’re still working on the remaining weapons (also in a new post, because you bet I’m going to take the opportunity to bump this to the top).

Great, at least now Boron won’t be a pushover anymore.

I don’t want to make it “more like the Ion”. Besides, given my most recent measurements, Utensil is the 2nd most popular weapon after Positron, so it doesn’t really need the boost.

Most weapons had their low power overheat values modified. The boost was removed […]

Why? When you have a low-power weapon, you’re causing little damage as it is. Why not help the player by giving them a few more seconds of firing before overheat?

Why? When you have a low-power weapon, you’re causing little damage as it is. Why not help the player by giving them a few more seconds of firing before overheat?

The main issue here is not damage but volume of fire. Weapons that fire less projectiles or fire less often at low power have more issues with taking out large quantities of enemies. Generally, weapons that have a constant hit rate across all their power levels don’t really require improved overheat at low levels, at least not in my experience.

Do note that the spreasheet has also introduced improved low power overheat for Riddler, Corn Shotgun and Moron Railgun, which don’t currently have it and would certainly benefit from it.

The boost was lowered across the board, because it was too severe in my opinion.

That change was iterating on the one listed in the first post:

That change was iterating on the one listed in the first post:

I haven’t changed the Moron’s projectile damage.I have, however, made it fire a bit faster on power 7 and 8 to straighten out its DPS line.

I haven’t reduced the overheat time on any weapons, though. Low power levels are (relatively speaking) predominantly used by newcomers, and I’d certainly like to help them as much as I can.

I think Plasma is broken in your Excel. It’s a constant 10s across the board, until max power when it’s basically infinite?

I think Plasma is broken in your Excel. It’s a constant 10s across the board, until max power when it’s basically infinite?

Yeah, it’s broken in the second file. I was using it to test stuff and I didn’t end up reverting it before uploading.

Wow you balanced so many things

A revolution as well. Isn’t that nice ?

Sometimes yes, but sometimes no

QOL changes on some weapons:

As always, May the forks be with you!

The volley needed to have an odd number of regular forks in order for it to deal the specific amount of total damage it needed, and it would’ve looked quite silly if one of those forks was off to the side.