This post will cover three weapons - one new one, and my first two ideas - redesigned visually and rebalanced in an attempt to better make them fit changes made in @1galbatorix1’s WBP.

The Pulse Cannon fires a fast, accelerating projectile that deals a huge amount of damage on impact and generates an explosion that can destroy weaker enemies and heavily damage stronger ones. While it deals a lot of damage, it has a very slow rate of fire of 1 shot per second, forcing the player to aim more carefully to avoid missing a shot. The explosion, while powerful, covers a good portion of the screen and doesn’t destroy enemy projectiles. When used against feathers, the feather struck by the projectile will be destroyed, while the others will be pushed away by the explosion.

0-10 the projectile’s size doesn’t change, instead only the speed and/or acceleration of the projectile is increased, which in turn increases the damage. On

20 the projectile’s size increases and it’s hue becomes more reddish, while the speed stays the same as on

The Pulse Cannon on 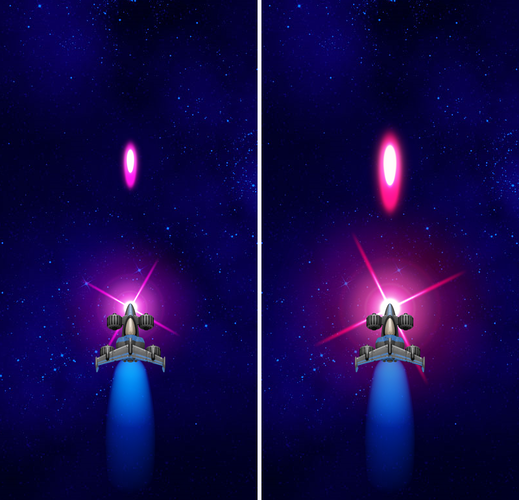 The explosion effect on

The Krypton Phaser is a plasma-based autocannon which fires bolts of ionized krypton. It can be considered as a heavy relative of Boron Railgun, Vulcan Chaingun and Hypergun. The individual bolts pack quite a punch and make up high-damaging volleys at higher levels, however the weapon has a rather slow rate of fire (2-4 shots per second depending on the power level). The weapon is designed to be used in automatic mode, and so manual fire isn’t very effective. 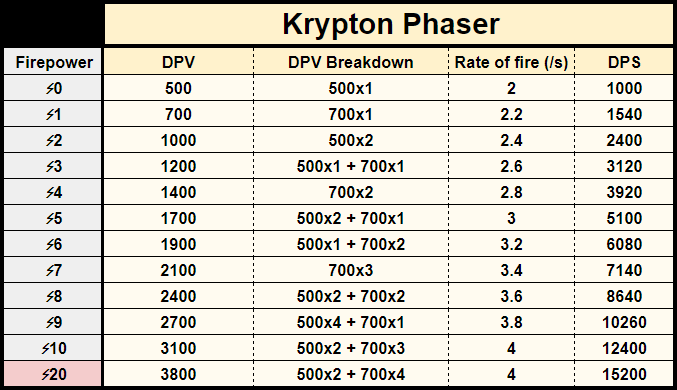 PewZap10400×770 270 KB
As you can see, the weapon alternates between left and right weapon pods, giving it a more interesting firing pattern (similar to the bomber on odd power levels).

I first mentioned the idea of a close-range weapon in my Kinda vague weapon proposals post, specifically when I mentioned the Zapper from Raze.

Stream Thingy generates a flame-like stream of particles, which has limited range and slowly follows the ship as it flies around (think of how a flame acts when you move a lighter around). The weapon is also virtually recoilless, meaning that the ship doesn’t rock back when firing. Stream Thingy deals more damage the closer the target is to the source of the stream (with a damage multiplier of up to x2), allowing the weapon to potentially exceed the DPS of any other weapon at the cost of requiring the player to come very close to the enemy. 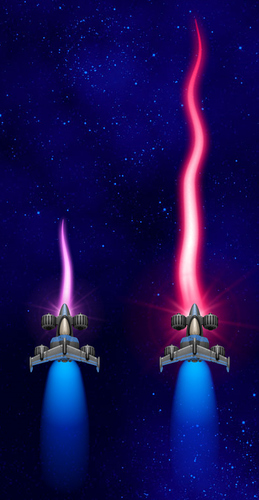 All assets (sprites, etc.) can be viewed and downloaded here.

Pulse cannon: Sounds good on paper and aoe is a thing that is missed in the game (I know 3/4 of satellites have this but I was intenting basic weapons).
I’m not a fun of pinky stuff but is so cool and fitting.

Krypton phaser is unecessary in my opinion, too much machine guns in the game.
In my opinion is even ugly (Bad color choice)

I don’t really like the Radion tentacle (streamy thing)
Is too risky especially over 80% of bosses.
One of laser cannon’s problem is its limited range and that thing is even worse. Damage doesn’t value the risk
I don’t even like the choice of color. There are already 2 of 3 weapons on the same category similar (Positronic stream and plasma rifle)

Krypton phaser is unecessary in my opinion, too much machine guns in the game.

I wouldn’t really classify it as a “machine gun” (I called it an autocannon for a reason). The slow rate of fire makes it more like a cross between Boron Railgun and Corn Shotgun.

I got this exact complaint with the first version, which is why I later remade it with an even slower fire rate and a maximum of 2 projectiles per volley at higher levels.
In the end, I decided that version was too boring so I went for this instead. The playstyle is still completely different from the current automatic weapons.

In my opinion is even ugly (Bad color choice)

It was originally green (in fact, I originally posted it because we currently have only one green weapon - Neutron Gun), but I changed the colors because these better represent the colors of actual krypton plasma (or in case of the weak projectile, krypton-xenon plasma). In my opinion, it looks fine.

I don’t really like the Radion tentacle (streamy thing)
Is too risky especially over 80% of bosses.
One of laser cannon’s problem is its limited range and that thing is even worse. Damage doesn’t value the risk

The only way to see if this weapon (and also the Pulse Cannon) can actually work is through testing. On

10 the beam is around 470px long, which is a bit less than half the screen. It could possibly be made to work like the Laser Cannon does now, extending the beam depending on the zoom level.

I don’t even like the choice of color. There are already 2 of 3 weapons on the same category similar (Positronic stream and plasma rifle)

It was originally pink/blue, but I decided to change it (I just thought this version looked better tbh). 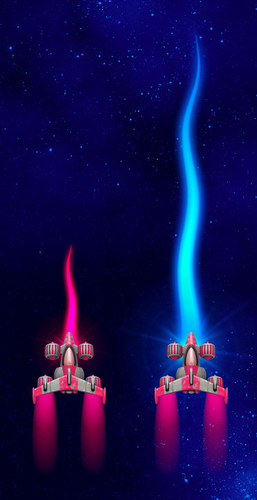 That’s some really interesting ideas there, pal! Love’em!
Mind if I ask you one question though?
What software did you used to make these assets? It looks like it’s almost taken from original game! And I’d be really happy if you could answer. I want to make my next concept arts as professional as possible :]

Krypton Phaser: sounds like a faster neutron gun to me, but as automatic fire instead of manually doing it. Kind of a mixed bag, the positive being the colour choices and the negative being something that somewhat we already have. Maybe if it had a damae increase the hotter the weapon is, it could be a better apealing. Though, I would instead prefer this mechanic to be pasted onto Hypergun, since it is also a ‘hot shard firer’ that sounds great on paper, but in practice it is a completely worthless weapon. So, if we’re shooting hot pieces of sharp metal, why not have a damage increase the hotter the weapon is? It is pretty much adding a new strategy to it, same way than Vulcan Chaingun has with spread and heat, especially useful on asteriods, comets, supernova and Caught by surprise.

Creepy Stream: it would be fun to try, I would expect a lot of rage with this.

All assets for the original versions of these weapons, as well as the revised versions here were made in paint.net with BoltBait’s , MadJik’s and pyrochild’s plugin packs.

Gerenally whenever I try to make a laser, bolt or literally anything I just start off with a shape (usually made with a brush or, in cases of lasers, a line), sometimes I use some plugin in the distort section to make it more irregular, then duplicate the layer, apply some gaussian blur and change the blend mode to whatever I think looks good.

I mostly improvise. The way I revamped the Pulse Cannon projectile was I just took the original one (which looked like this:

), copied the layer, changed the blend mode to color dodge (I think) and then blurred it a bit. I did some more messing about with the flare and the explosion and then used the same technique to make sure that they’re visually consistent.

With the Krypton Phaser projectile, which was originally green and blue, I used the curves plugin to separate the green and blue channels into different layers and then started recoloring them and tweaking the blend modes.
This is how they look like if you separate the layers: 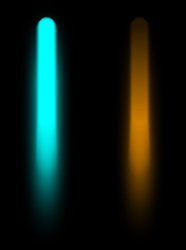 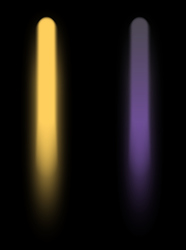 Big thanks!
I’m gonna bookmark this post if you don’t mind, because this is really useful.
I’m not a pro with art programs, but I think I’ll understand.

Maybe if it had a damae increase the hotter the weapon is, it could be a better apealing.

I believe @1galbatorix1 is already giving this feature to Boron Railgun.

Though, I would instead prefer this mechanic to be pasted onto Hypergun, since it is also a ‘hot shard firer’ that sounds great on paper, but in practice it is a completely worthless weapon. So, if we’re shooting hot pieces of sharp metal, why not have a damage increase the hotter the weapon is?

Not quite correct. Boron Railgun and Vulcan Chaingun fire superheated metal chunks, while the Hypergun is energy based. So is Krypton Phaser, or specifically, it’s plasma based.

Technically it’s slower. It packs more of a punch than Neutron and overheats way slower, but has a much lower rate of fire. Neutron Gun is generally good all-round, this thing on the other hand is based more on high DPV and high max damage before overheating.

I mistaken names, I thought Hypergun was the yellow one.

By faster I mean velocity wise, not on firerate, but things get hard to understand when I put autofire on the same sentence. My bad.
So, I’m not familiar with weapon’s numbers, it would have a firerate similar to ion blaster’s autofire? I could be cool with that, slow firerate, focused high power and fast projectiles.

Ion Blaster has an automatic rate of fire of 5/s. This one varies between 2 and 4 (for reference, Corn Shotgun’s manual fire rate on