A small but important update to iron out the kinks with the new waves, as well as add 4 new ones. Also, some minor improvements to existing old waves. Due to changes in the wave pool, ongoing league dares have been reset. 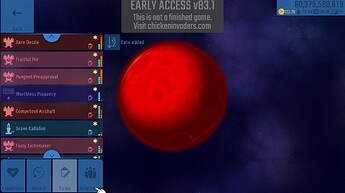 I was supposed to get 5 idea medals, I only got 4…

This one doesn’t count so you didn’t get a medal.

Medal shared. I see no benefit in restricting them unnecessarily. Where? Squadrons are already ordered alphabetically. Granted, but the reverse leaves you defenseless (because you can’t shoot at the nearest enemies to your location). A poll is needed. Because that particular enemy can’t move and attack simultaneously. The new saucer can, however. I’ll swap it. Changed in v.83

Idea Difficulty increases fire rate, but it still only fires once. But it could be changed to…

Why is the blue alien called “Fester”? Is this a reference?

Yes, and no one was able to figure it out until iA pointed it out himself

Why the Alien at “Tribute” wave doesn’t attack

Because that particular enemy can’t move and attack simultaneously. The new saucer can, however. I’ll swap it.

You didn’t suggest it. You asked why doesn’t it attack.

Well, I asked about U.C.O before and got medal:

why “Close Encounters” the only U.C.O boss doesn’t have U.C.O on it’s title

. However, I have now changed the subtitle in CIU to mention U.C.O.

But I see your point too.

If my name would’ve been removed from the Alien change or at least the word “idea” be striked it would’ve made more sense(that’s why I got confused). 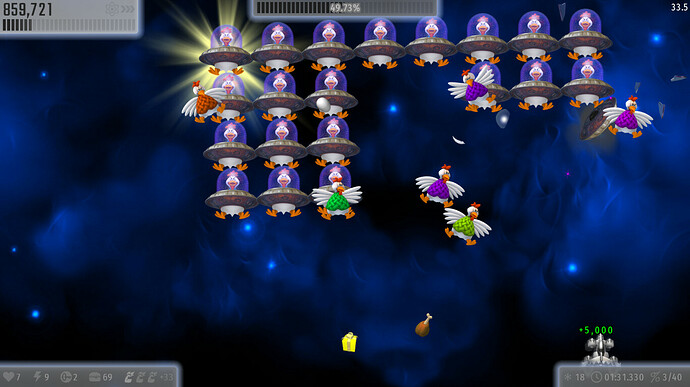 Barrier nodes disappearing Symphony No. 1 in C major feels quite weird. Probably a vanishing effect would do the trick (same as other waves using these nodes).

Add 5 new waves for chicken invasion
Add a new boss, the boss rush is boring to play over and over with only the old bosses

@InterAction_studios Can you add the wave “Saucer Attack” reverse version, meaning it can appear from the left side of the screen instead of 100% appearing on the right side of the screen and the left:right ratio is 50:50. And, should the “Pecking Order” bonus be on the “Skyscraper” wave?

Can you add the wave “Saucer Attack” reverse version

should the “Pecking Order” bonus be on the “Skyscraper” wave?

Did you encounter the “Saucer Attack” with the flying saucer appearing from the left during the wave?

I’ve encountered it just now on the Space Race, and they came both from the left and right

These colors are automatically generated, and it would be too much of a maintenance hassle to make them individually theme-able.

I was supposed to get 5 idea medals, I only got 4

can u keep the old UFO drop design for UFO chicken

I don’t see how that would be better. Black LED or green LED, they are both wrong (since this particular saucer doesn’t even have a LED).

There aren’t any barrier nodes (the electric fences connect directly to each other). I had some in there originally, but they interfered with firing, so I removed them. I could easily put some in. Poll.

“Saucer Attack” has random but uniform entry direction. You’re thinking of “Mars Attacks!” – on that one enemies enter from both sides.

should the “Pecking Order” bonus be on the “Skyscraper” wave

It already has Pecking Order. Do you mean it shouldn’t? Why?