New content (waves, specifically)! Hard to believe, I know. I originally didn’t intend for it to become this massive thing. I merely wanted to add a couple of new waves to the game, because (i) it’s been a while and (ii) there’s a long upcoming period during which adding new content will not be a priority. After the first 2-3 waves, however, I kept adding more and more because (i) I re-acquainted myself with the wave creation code, so my efficiency increased (for a similar reason to why working sets, cache warming and economies of scale are a thing) and (ii) great new ideas kept coming in from you guys. It almost killed me, but I crammed in as many as I could (a few more will appear in the next update).

Encountering some of these new waves ‘naturally’ in missions is hard, so if there’s any demand, I’ll create a special mission that includes all of them. That’ll have to wait until v.53, however, because there’s currently no support for this and I’ll have to hack a special case into the code.

There’s also a new type of daily challenge named “Weapons Training”. Despite what its name might suggest, it’s not actually related to WBP – instead, it’s an alternative type of daily mission where you are forced to use a different weapon on each wave. It generates randomly with a 33% chance, so it might be a few days until you see it.

The downside of all this was that I didn’t have any spare time to work on anything else (namely, actual weapons balancing). That will also wait until v.53

Well , i dont like the egg canon canon cannonade flame things becuase they letirally firing everywhere and i lose 2 or 3 of my lifes so i go crazy going everywhere , by the way lets see the new uptade

If someone plays my wave, send me a photo please, I want to see my creation lol

ok i know know the new waves is Binary scream , the trash compactor , tangled mess , play both sides and shear stress , i want to see more and try them

so if there’s any demand, I’ll create a special mission that includes all of them.

yes should be nice…an experimental mission!!

i dont think so , some experimnetal missions cosumes me many lives

You’re not force to try it than

no i meant some hard chickens like the fat , the egg ships and the armored chickens are very tricky but easy those consumes me lives , also i know some tactics to defeat them but that might consumes life and i always use ICBMs

Now that reminds me of terminator chickens wave… (but still a cool change tho, and yes I know there’s a different topic for that, but I just wanted to say my opinion) 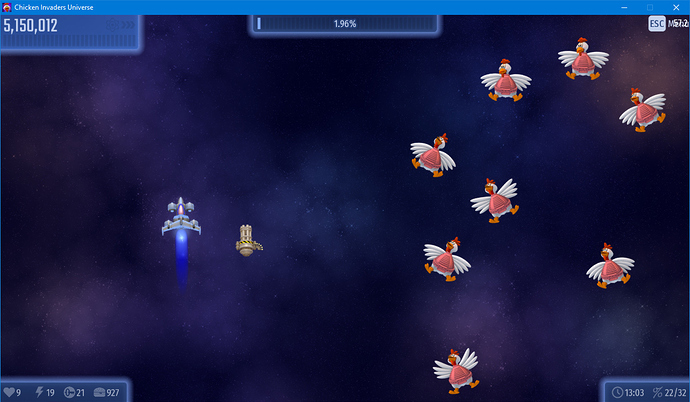 Those chickens really annoying in this waves , specially the toxics and the fat chickens

they are but sometimes are hard

The first update that focuses so much on new waves!

I just encounter the asteroids no really wave

…I was thinking that should be nice that evan the asteroids would spawn keys!!!