Why does “apple core” have a life bar? in theory he is the boss so he already has one, the enemies in the wave are the barriers so it is good that they have one but not “apple core”

Also, can the life bar be customized? on the subject of colors because I have searched and that option does not appear

Edit 1 (07.11.20): This bug (I really don’t know if it counts as one) of “the double life bar” has happened to me with “Bossa nova”, “Yolk star”, “Mother-Hen Ship” and “U.C.O # 1” (presumably it happens with other variants of U.C.O), This bug occurs with bosses which have 2 or more points which can make projectiles disappear (example of this: The weapons of the U.C.O, the lazeres that shoot from the yolk star, the egg shell that can being destroyed from Mother-Hen Ship, the remains of a supernoba around bossa nova, etc.), but I don’t know if that “rule” is always followed by that “bug”.

Why does “apple core” have a life bar? in theory he is the boss so he already has one, the enemies in the wave are the barriers so it is good that they have one but not “apple core”

maybe bc is to smol

It may be, but still it is seen that he is the boss to defeat

I think health indicator color needs to be changed depending on how much health the enemy has.
Ex. When the enemy has 100%, it becomes green, and when damaging it, it smoothly turns to yellow, and when it has very low health, it becomes red. (Edit: It becomes red already, but at around 1% health)) What do you think? @InterAction_studios
Also, is it possible to remove life bar from this enemy? it already has one. (that’s my opinion tho, and plus, the particle hides the life bar) 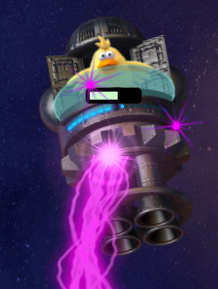 Also, I noticed that Super Chick (and Infinity and Sweater and Military and Party Chick) and Space Crab boss and others do not have life bar. Is that normal?

Not sure if was suggested or not, but is it possible to add the option named “use in-game cursor” on advanced options menu?

I got noticed what “Asteroids, no really” has Clean sweep when they cant go, or yes? 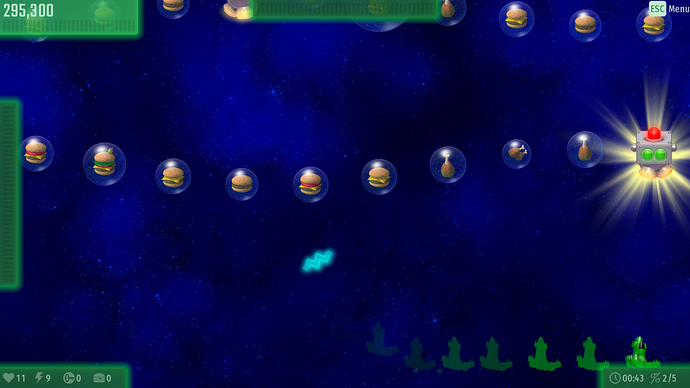 no it isnt , it never happened to me when i used the damage bar

Um, did you even read the post? It does not appear even when I used it, so it’s a bug.

yes i did but i dont think that becuase it never happened to me , plus i always read the post

Don’t confuse it with damage indicator. These are 2 different things.

Alright then , but i still think it never happened to me

What did you mean

Look maybe its a bug for a reason , i am playing now on small laptop it has 2GB i recieve some lag and bugs , i have the game on my computer but i am now in my grandma house , it is in my house

Clean sweep is a achivment , u make it by clearing all enemies in a wave , so can u clean all the Astroids in any astroids wave ? of course u cant

Dont confuse with the normal asteroids wave, im talking about “Asteroids, No Really” wave, and in that wave the asteroids cant go, but it has Clean sweep

Clean sweep is a achivment , u make it by clearing all enemies in a wave

You can get it killing all the Enemies what can escape

themself escape , in no really u can but u cant do it in normal astroids wave

You still don’t get it right?