Let’s take stock of what we have:

Actually, I was lying just above when I showed the graphics arranged in neat textures. CI1 graphics are actually stored as individual files, and the screenshots shown are the output of an automatic transformation step that removes the color keying (converts it into “alpha” transpacency) and organizes them into textures (that can be used by more modern versions of the UVE engine). I originally wrote this program in 2009 (apparently, judging by the file dates) for the CI2 remaster, and I tweaked it slightly to also handle CI1. 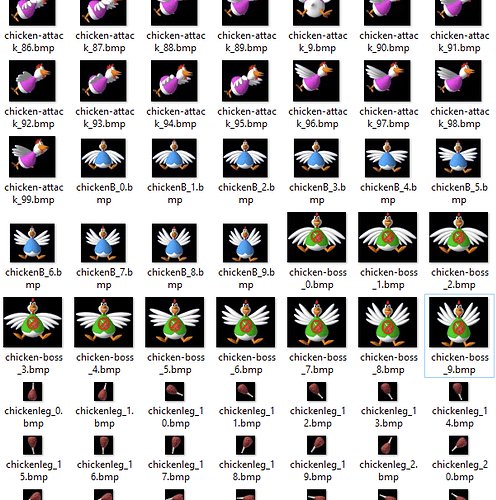 There are also 23 .WAV files for sounds, but I’m not going to focus on those, since they will mostly be straightforwardly converted into .OGG and used verbatim. They are of predictably low quality, but I no longer have the original sources and even if I did, I doubt their quality would be any higher. I think they’re part of the charm of the original game anyway.

(so, would you fix these stray pixels?)

320k lines is insane yo, congrats for the achieved progress

Will you release the remaster in Steam? or only in the website?

would you fix these stray pixels

Will you release the remaster in Steam? or only in the website

Unknown at this stage. Remastered or not, it’s a very simple and old game, and I don’t want players’ first contact with the franchise to be this particular episode, because it will give the wrong impressions.