I have been looking forward to this and also equally dreading it for the past few days. But first, some context. As you might recall:

I want to make a clear distinction between the core of the game (the mission itself – everything starting with the menu screen you see above), and the ancillary parts (introduction, outro, menus to set up graphics/sound/controls, etc). During the mission, remastering rules are much stricter and the number one priority is to preserve the spirit and the aesthetics of the original game. For the ancillary parts, things are more relaxed and pretty much anything goes (you’ll soon see that the entire introductory sequence will be remade from scratch).

So the “core” is the CI1 mission itself, and the “wrapper” is the CIU engine, menus, settings, introduction – basically anything except the core.

The introduction is part of the wrapper (*). The good news is that we don’t have the same strict remastering constraints as the core. We can take some creative liberties, back-port newer graphics from the episodes, plus we can run at 100+ fps (the core is always at 25 fps).

* In the original, the introduction uses its own independent rendering loop and its implementation is very ugly. So even if I wanted to keep it part of the core, I would still have to re-implement it from scratch.

The bad news is that the introduction is a cutscene, and cutscenes are typically very time-consuming to produce. There is no visual scripting, so everything has to be choreographed and synchronized with code. And everything is on a linear timeline, which means I can’t just randomly jump to an arbitrary point in time to view a particular cutscene segment (this is particularly problematic because the longer the cutscene becomes, the longer it takes to get to the most-recently added segments). Luckily I can speed up time within the engine, and I can also try to comment out large sections of code to “get to the chase” sooner (this doesn’t always work if there is a dependency on previous segments).

Anyway. Although we can do whatever we like for the introduction, I decide to keep the ‘plot’ and the ‘script’ of the cutscene exactly the same, but implement it using some fancier technology. 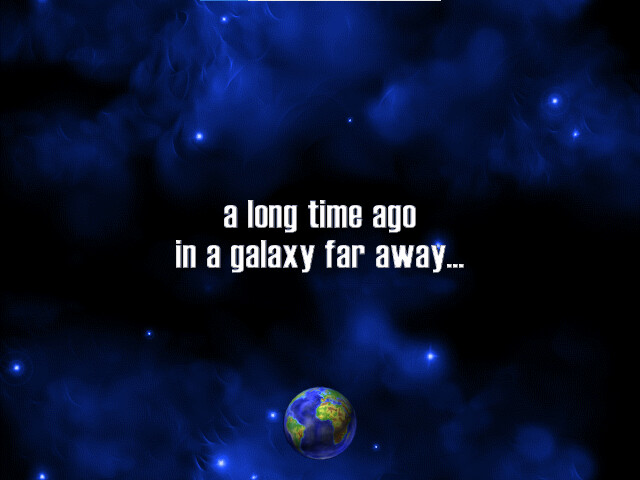 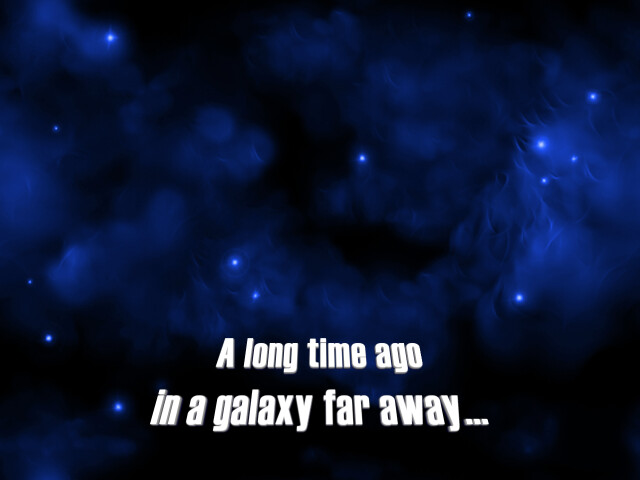 I take mental stock of the work ahead, and immediately decide to apply the “principle of least effort” liberally. I’m going to reuse pre-existing building blocks. Namely, the “star wars scroller” (*) from CI3, the earth from CI4, the space burger graphics from CI4+. In fact, the only thing I ended up re-rendering for this introduction was the player spaceship (although I could have got away with re-using one of the frames from the mission)

Although I did end up using the scroller as such, I did eventually decide that it didn’t look good enough when using the plain new white font, so I spend some time “improving” it. Interesting how something that was supposed to save me time ended up costing me time. At least CI1 is now arguably better than CIU in at least one way.

The only thing noteworthy here is this scene from the original: 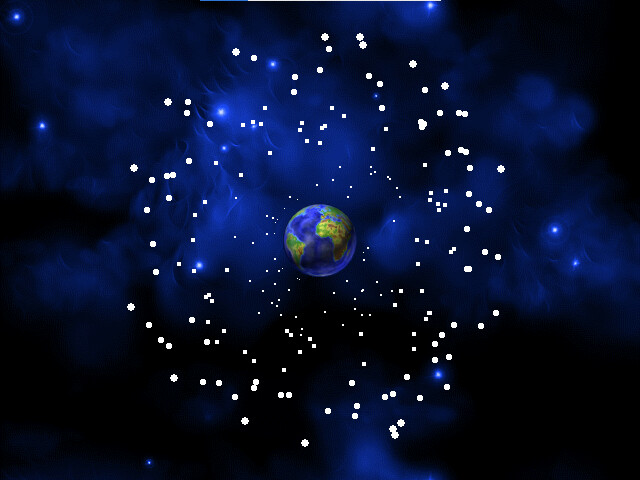 I don’t like this. I’ve never liked it. What is this supposed to be? Invading chickens? Eggs? Guano?

We’re not constrained by 1999 technology anymore, so let’s see how we can improve this. I come up with the idea of re-using the code from the CIU asteroid belts (*):

* Asteroid belts are one of the very few places in CIU where actual 3D calculations take place. 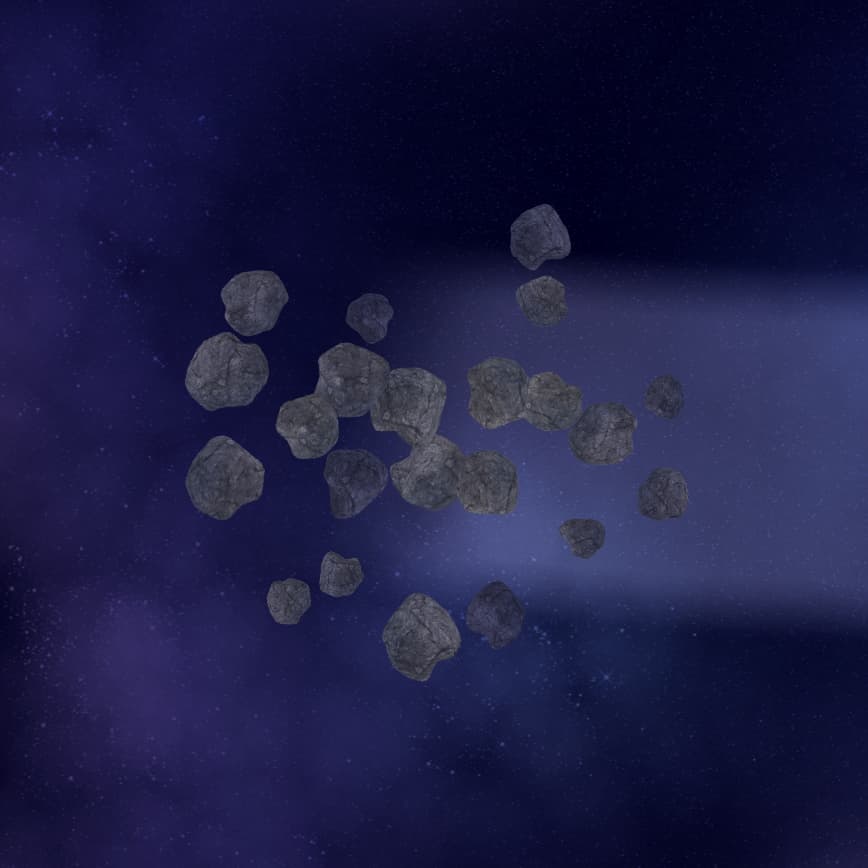 A small modification here, a little tweak there, et voilà! 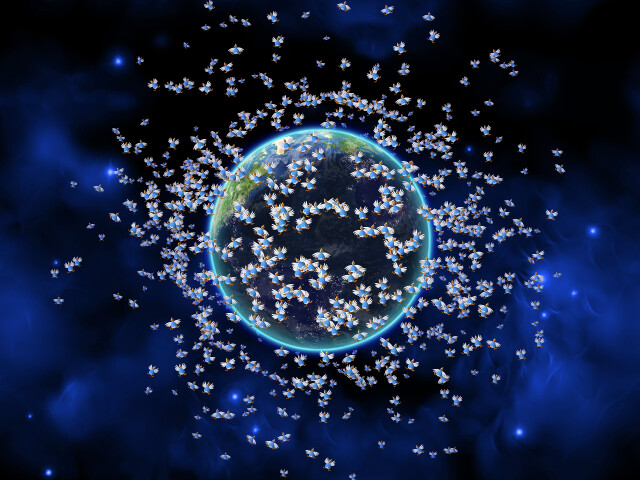 Now THIS is a proper invasion!

This quote says it all:

There are also 23 .WAV files for sounds, but I’m not going to focus on those, since they will mostly be straightforwardly converted into .OGG and used verbatim. They are of predictably low quality, but I no longer have the original sources and even if I did, I doubt their quality would be any higher. I think they’re part of the charm of the original game anyway.

With regards to the music, however, I have decided to use 2dB’s excellent 120th Anniversary music track, which was expressly inspired by CI1’s music, so it fits perfectly. The remaster also has an additional perk: The “in-game music” setting allows you select between continuing to play it during the mission, or complete silence (as in the original game).

Sound code was inherited from the CI2 remaster, which I see only has a 25% stereo pan (controlled by where on the screen horizontally a particular sound is emanating from) . I’m not sure if this was intentional or a bug, but the CI1 remaster pans 100% regardless. (*)

* Will this be retro-fitted to CI2? Hmm…

In no particular order, some other relevant notes about the remaster:

I don’t like this. I’ve never liked it. What is this supposed to be? Invading chickens? Eggs? Guano?

Honestly when I first saw this as I was young I thought it was SNOW.

So what do you have left?