The position of several planets

Some frozen wasteland planets are quite close to the sun than the alien world planet .This seems ridiculous.
For example, this is Beta Calyse in Panopeus constellation. 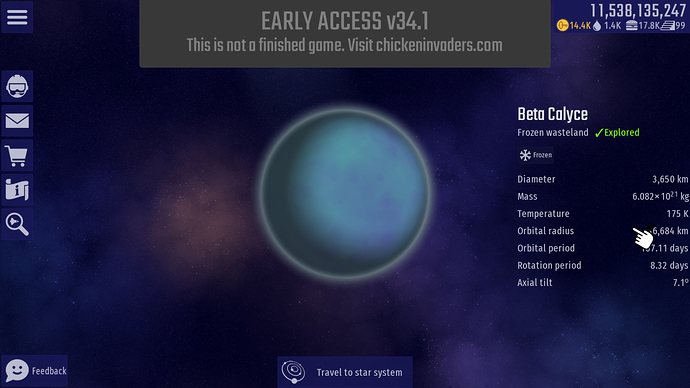 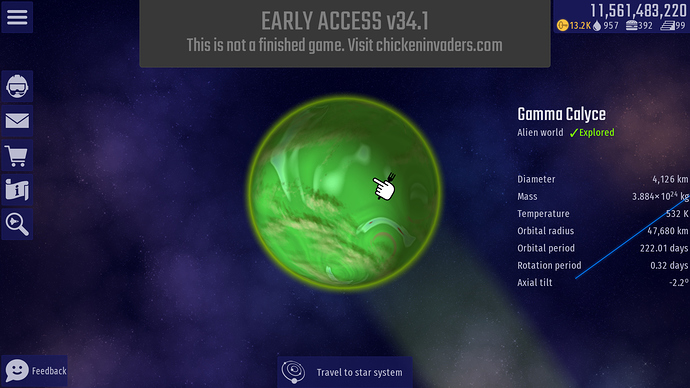 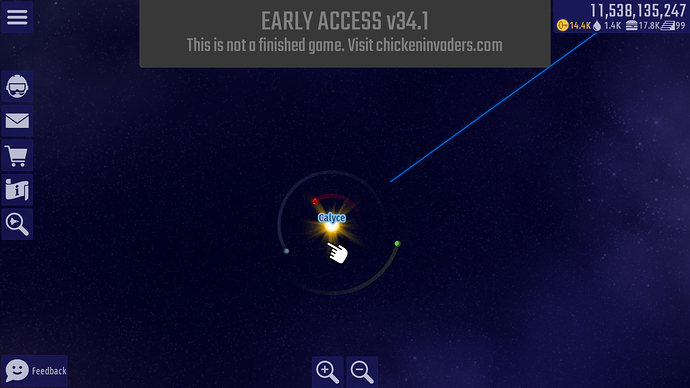 Uh… physics are broken in CIU

I think it should be fixed.

Yeah, IA really should lose plenty of time for stupid tweaks like this, instead to fix something or even better… new content, new mechanics ect.

Few days won’t be a big difference given the current state of development. Look at this:

I’d really like to do this, but (a) the list is currently 700+ items, (b) it’s mostly embedded as “to-do” comments in the code, (c ) maintaining it separately would be a burden, and (d) it might create false expectations as items are constantly modified or deleted. As for an overarching roadmap, I’m afraid there isn’t one. There are just very broad areas that need work (like “Noob October”), but even those aren’t set in stone (we all know what happened with Is it everyone prepped for Noob Octob…

We didn’t get a single new thing since EA v 30 and that’s nearly 3 months.

I think the proximity to sun isn’t related to the temperature. Think of Venus and Mercury, Venus is hotter than Mercury, but it is further to the Sun.

Think of Venus and Mercury, Venus is hotter than Mercury, but it is further to the Sun.

And, I might add, Mercury does actually have water ice on it. So I’m not really bothered by this issue either.

Mercury does actually have water ice on it

In the deep meteorite craters?

Mercury is always day in one side and always night in the other.

Mercury does actually have water ice on it

In the deep meteorite craters?

Mercury is always day in one side and always night in the other.

This. The day/night cycle is not super exact (some parts have day/night on horizon but there are like solar “poles” that always face one way) but I’m pretty sure it’s surface ice - it was photographed from a satellite which is how they found out about it.

It’s not a lot, but the point still stands that distance to star isn’t always indicative of geographical features (even those that relate to temperature).

Although the daylight temperature at the surface of Mercury is generally extremely high, observations strongly suggest that ice (frozen water) exists on Mercury. The floors of deep craters at the poles are never exposed to direct sunlight, and temperatures there remain below 102 K; far lower than the global average.[68] Water ice strongly reflects radar, and observations by the 70-meter Goldstone Solar System Radar and the VLA in the early 1990s revealed that there are patches of high radar reflection near the poles.[69] Although ice was not the only possible cause of these reflective regions, astronomers think it was the most likely.[70]

The icy regions are estimated to contain about 1014–1015 kg of ice,[71] and may be covered by a layer of regolith that inhibits sublimation.[72] By comparison, the Antarctic ice sheet on Earth has a mass of about 4×1018 kg, and Mars’s south polar cap contains about 1016 kg of water.[71] The origin of the ice on Mercury is not yet known, but the two most likely sources are from outgassing of water from the planet’s interior or deposition by impacts of comets.[71]

Mercury is too small and hot for its gravity to retain any significant atmosphere over long periods of time; it does have a tenuous surface-bounded exosphere[73] containing hydrogen, helium, oxygen, sodium, calcium, potassium and others at a surface pressure of less than approximately 0.5 nPa (0.005 picobars).[14] This exosphere is not stable—atoms are continuously lost and replenished from a variety of sources. Hydrogen atoms and helium atoms probably come from the solar wind, diffusing into Mercury’s magnetosphere before later escaping back into space. Radioactive decay of elements within Mercury’s crust is another source of helium, as well as sodium and potassium. MESSENGER found high proportions of calcium, helium, hydroxide, magnesium, oxygen, potassium, silicon and sodium. Water vapor is present, released by a combination of processes such as: comets striking its surface, sputtering creating water out of hydrogen from the solar wind and oxygen from rock, and sublimation from reservoirs of water ice in the permanently shadowed polar craters. The detection of high amounts of water-related ions like O+, OH−, and H3O+ was a surprise.[74][75] Because of the quantities of these ions that were detected in Mercury’s space environment, scientists surmise that these molecules were blasted from the surface or exosphere by the solar wind.[76][77]

On November 29, 2012, NASA confirmed that images from MESSENGER had detected that craters at the north pole contained water ice. MESSENGER 's principal investigator Sean Solomon is quoted in The New York Times estimating the volume of the ice to be large enough to “encase Washington, D.C., in a frozen block two and a half miles deep”.[64][c]
(So, Mercury is both cold and hot because its atmosphere is so thin, almost none. So the ice at the poles cannot melt or evaporate.)

How would this affect the gameplay? No, for real, you try way too hard.
There is absolutely 0 reason to try this hard to apply real-life logic into a game, especially a game whose purpose is killing chickens and now also exploring a galaxy that is VIRTUAL, NOT REAL.

If the game were to be realistic, the planets would be so insanely bigger that you would have a VERY hard time finding your own ship and also it would need an insane amount of time to apply all the parameters such as planet type and colour to the galaxy, time that could be used for things much more useful, such as weapon balancing, new content or bugs.

Please don’t try so hard trying to find logic or applying it in a game, especially one that is not focused on astronomy. Just try to enjoy it.

There is no point of explaining. Its obvious that this guy wont accept that. This is pointless just like talking to flatearther that the earth is round.

Its obvious that this guy wont accept that

Then how did he mark Alucard answer as solution?

How would I know?

If he accepted this as a solution then it means that he accepts it as an answer to his problem.

Somehow I cant see who did the solution