Anyways, this is my idea of what could be, the most epic and chaotic boss wave ever.

So the way this boss wave works is that the screen is zoomed out to 300%, yeah that’s a lot, but that’s kinda required considering the number of chickens present in this MONSTROSITY of a boss battle.
The chicken spawning locations are shown here complete with color coding: 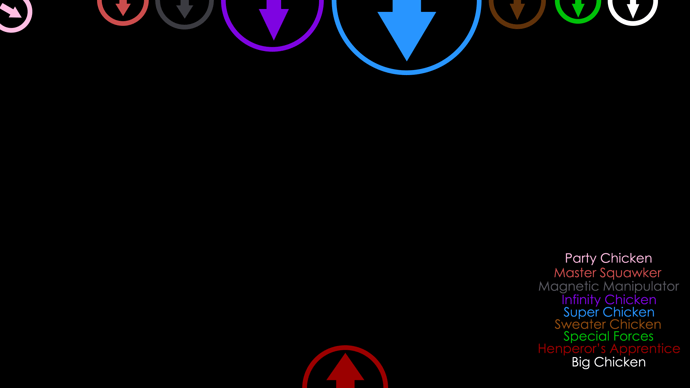 Chicken Gang Origins1920×1080 94.7 KB
This is a rough estimate of what the fight could look like without any projectiles and attacks,
(Chickens NOT to scale): 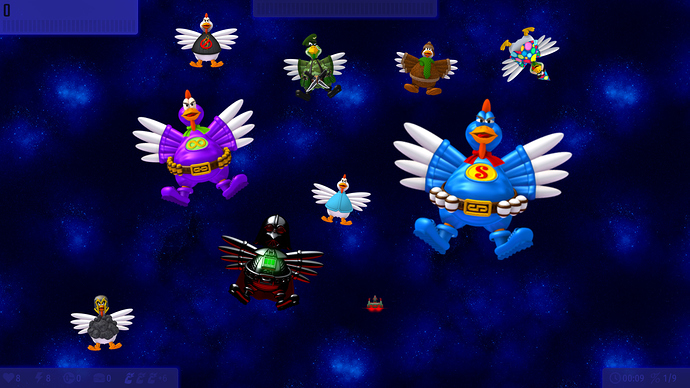 Chicken Gang!1920×1080 785 KB
So yeah, this looks pretty insane and if we kept all of the original attacks of all of these boss chickens, it would be too hard and unfair, so I suggest changing them for this particular boss battle only:

As a general nerf, their movement speed is reduced by 33%, except for the chickens which have their own specific speed nerfs.

Now the numbers and attacks are merely but an example since I can’t predict the actually difficulty of this boss wave with 100% accuracy, although I did try to make a rough estimate of what the bosses should and shouldn’t do. If it just so happens in the actual game that the bosses are either too underpowered or too overpowered, you can suggest tweaks for this boss fight.

Edit: I have received criticism stating the fact that this boss fight would be very long, and while I did intend the fight to be prolonged, I did overlook the frustration that would come with the boss fight appearing in space race and daily challenges, so I request that it would be restricted from appearing in those challenges as well as normal missions which are less than 30 waves long. They could be allowed to spawn in Boss Rushes, Longer missions which are more than 30 waves long and in weekly challenges. Additionally, if this idea did come into fruition:

Here comes to my old suggestion, bosses are categorized into major bosses and normal bosses. Major boss will only appear in the end of the mission. Creating somewhat less frustrating mid-level fight, and anti-anti-climatic (lol) end. And chicken exponentiality and egg cannon cannonade are in this category for obvious reasons.


I would suggest the Chicken Gang boss fight to be put into the category of “Major Boss” as most players would expect a somewhat prolonged final boss fight.

As for my idea being being rather unoriginal due to the reuse of existing bosses, well sadly, I can’t deny it. However with IA planning to significantly slow down the development process in August:

Actually, due to other demanding matters, development will proceed very slowly over the coming week. Then v.50 will come out, followed by perhaps another 2-3 more versions, before an extended slow-down period during August.


I figured that this would be a decent new boss fight for the time being, since I’m pretty sure that for many of of us, fighting all of the chicken bosses as of Early Access Version 49, at the same time would be fun.

But just in case you really are not liking my idea, here’s a poll…
Edit: Post is now closed.

As always, be constructive and civil when criticizing someone and may the Forks be with you!

I like this, we have officially found the perfect showdown. Although maybe it should be nerfed a bit

As always, be constructive and civil when criticizing someone

Do you imply that there are people without constructive criticism?

I myself would rather see a totally new boss get added rather than another mix of existing ones.

Sounds good, except for two things.

I mean, it’s good. But please don’t clutter the boss roster with any more duplicates. Galbatorix proposed turning the Egg Cannon Cannon Cannon into a raid boss, maybe this could receive similar treatment?

I’m on board with the ‘new bosses’ thing but making the AI and the sprites for a new boss can take a lot of time. Currently the game is lacking a lot of content (yes, I know this is Early Access) so recycled bosses can act as placeholders for new bosses for a short while and then a new boss can be added since the recycling gave some precious time to program. I think that this could be an easy addition since you’re just making a few changes in the AI.

You just explained gamedev. It takes a lot of time, but the effort is worth it (sometimes).

Currently the game is lacking a lot of content

We don’t know what it is lacking now because we don’t have a roadmap of what it needs before release.

It was already like that in EA v1. This game was literally a mix of recycled content straight up imported from CI4 and CI5. This short while lasts 18 months and we only got 4 new bosses (6 if we count meme egg canon version and another multiplicity as new boss).

Define “then”. It’s 18 months since EA v1. I know that programming is time consuming, but how is it different if you spend it on adding another recycled content from spending it on making a new one? The second option at least makes the game fresh, more exciting. Really, we have enough boss mixes for now.

since you’re just making a few changes in the AI.

Yeah, it doesn’t sound bad unless you remember that CIU is a rather specific game from technical point of view. Here IA explained it well:
About moderation and development
So I wouldn’t be surprised if making few small changes in the AI takes much longer than it should have.

What would you say for a name: Revenge of the Bosses!

Do we really need another long boss fight with literally same bosses over and over? Imo, short (1-2 minutes) but intense fight is more appealing than long fights.

Great idea, hope they add it .