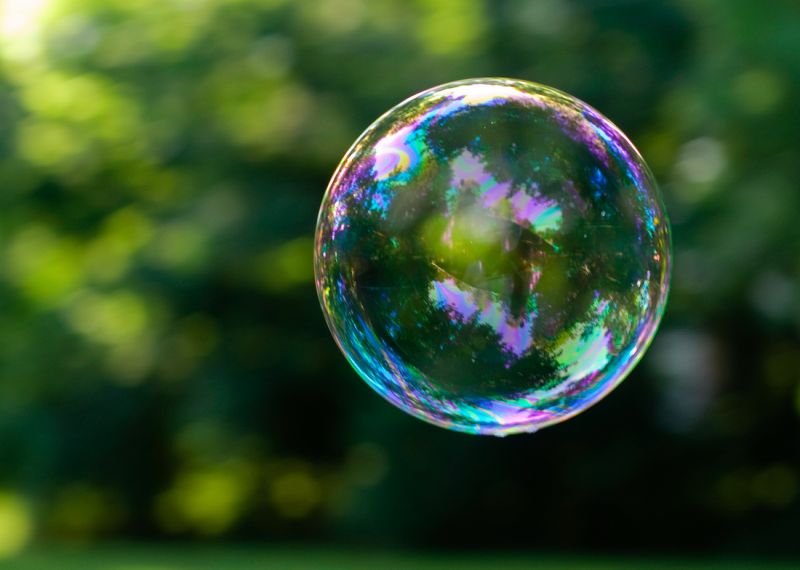 Appearance and creation: Soap bubble would be the biggest projectile we can achieve in the game. It’s created and supply by our ship’s gun and by player holding the fire button. Created bubble will expand and cover the whole ship as it move as long as they keep the fire button. If they only click fire button they will get a small size bubble that is big enough to cover the ship before floating up, so that player can’t spam bubble by clicking. After released it would start floating up slowly with a constant speed. Player can enter the bubble and continue to supply gas to it. The longer of the supply the bigger the bubble. Bubbles have size limit, and we can’t create a new bubble inside another bubble nor explode max sized bubble by trying to supply it. It’s size limit is half of a normal screen (like in the image above). Beautiful rainbow curves rotate over time in the bubble surface, but should not create any visual impairment as bubbles are transparent. Two jointed bubbles can merge into one big one if the new size is accepted.

Behavior: Bubbles explode upon contact with matter except collectible things and they absorb energy waves except lasers. That means they would explode when in contact with: all type of enemy, eggs, waste, enemy’s bubble, falling UFO, toxic gas, feather, sun, barrier, dimensional tunnel, knife, etc, … and they absorb all energy bullets, and laser would not break them or got absorbed by them. Bubble would have a “water drop”-like effect when it absorb an energy bullet or in contact will a laser line, imagine an energy barrier in movies. When broke bubble makes an AOE damage that is double its radius, gives constant normal damage that based on level. It’s weapon group is special.

This is similar but ok

Here’s another little weapon idea I have, the Bubble Gun: [com-video-to-gif%20(3)] This Video shows big Bubbles (there are small ones with 200 Damage and big ones with 400 Damage). This is the Gun at firepower 10. What do you think?

It was even older than that. That is the first one and it was even liked by IA:

I figured I’d make my own topic for some of my main ideas. (By the way, big heartfelt thanks to @EmeraldBirb for helping with putting example images and .gifs together for the weapon/enemy ideas.) [Weapon] Snowflake Flurry [Might need a new design] This weapon idea is my first, named Snowflake Flurry, which fires a spray of snowflake-shaped cryogenic crystals that can slow enemies down a bit the more they get hit by it. Unlike weapons already included in CiU, this would be the first weapon of…

Maybe it works differently, but I prefer IceIris’ idea for bubble weapon.