As some of you may know, a new spacecraft family will soon be added to the game: 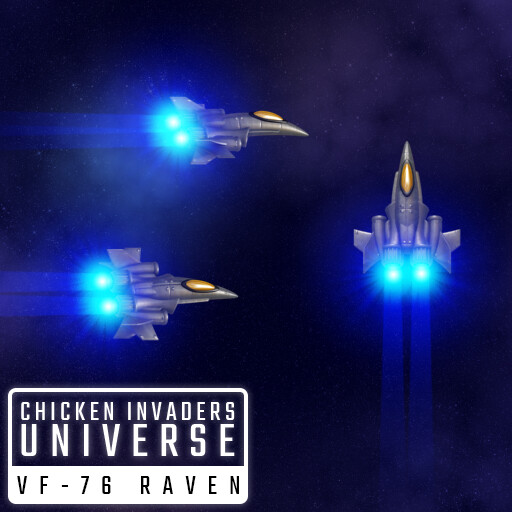 Before we get into specifics, recall that:

Having said this, there is a choice between 3 different special abilities for this spacecraft:

Can use two different weapons simultaneously. The weapon mounted in the loadout is the primary weapon, and is always present. Any gifts picked up change the secondary weapon. Picking up an atom will upgrade whichever of the two weapons has the lowest power (primary weapon will be given precedence).

The “overdrive” weapon mechanic is replaced with a “charge/discharge” mechanic (only for this spacecraft family). Dealing damage to enemies accumulates charge. When charge is full, it can be unleashed under the player’s control (by double-tapping). Discharging increases firing rate significantly (more so than overdrive) at no extra heat cost. Once discharging starts, it cannot be interrupted until the charge is depleted.

(Partly based on: About the current state of spacecraft in the game)

If the preceding appears to be a little under-specified, it’s because I want the discussion to be focused on mechanics rather than specific values. Once the special ability is decided upon, it will be tweaked over the coming weeks. Also, note that lore is secondary at this stage – even though this spacecraft’s appearance suggests some sort of stealth/superiority fighter, it is not necessary that its special ability reflects that. There will be more spacecraft families in the future, and appearances might change or be swapped altogether to make them better match the abilities.

Which would you prefer?

Which special ability do you prefer?

Isn’t that a bit too low? It wouldn’t pose much of a threat against bosses/minibosses on missions like Ironman, so maybe 8-9 per weapon would be better suited. The “Charge/Discharge” one seems more balanced.

Potentially, but the only way to know for sure is to see how it performs in action. The limit can easily be tweaked based on feedback anyway.

maybe create an in game poll by creating maybe a spacecraft test like with bx, but with all three mechanics so players can choose which one they feel is better

Each family is not just a cosmetic texture-swap, but it needs to provide unique advantages/disadvantages that shape gameplay in a meaningful way.

The “overdrive” weapon mechanic is replaced with a “charge/discharge” mechanic (only for this spacecraft family).

How about adding 3 different raven space crafts of this type supporting each option listed here.

That’s why I voted the second one

If you use a spaceship of that family, then you get to use that charge/discharge mechanic instead of the overdrive

I’ll wait for IA’s reply, thanks.

The third option definitely needs to be a feature in a family spacecraft. I consider it needed. If it doesn’t end up on this one (which it probably isn’t going to), I VERY MUCH support it being added for another one. Please do not discard the 3rd option for future updates iA.

I’d rather it were the feature of the H&C’s. That firepower cap was initially intended for H&C’s to encourage the player to switch to Mullers. As for Environmental Resistance, I suppose it could be cool, but I think it’s brought down by how environments are designed in the game. They’re just stat debuffs, instead of being the double edged swords they should be. Environmental resistance kinda just… negates it. I feel like it’s kind of boring. An unrelated gripe I have with the environments is that I wish they had more to them (for example, the frozen environment could have your weapons cool down faster, while still obscuring your vision). But as it stands currently, environmental resistance is just very… boring coupled with the firepower cap which should be a feature of the starting spacecraft rather than one you give keys to buy.

As for discharges, I feel like while it’d be nice to have a variation of overdrive on another family, I would still recommend some sort of rework to the classic overdrive for Mullers and H&C’s. Dual Weapons I feel are a really boring and frankly, lazy way of introducing variation into firing patterns

Fair point, but since it’s a “starter” spacecraft it has less options for improvement (satellites, hardpoints)

First things first, I am really happy to see this poll and discussing potential incoming features like that! More of those please!

Since I’ve been playing some CIU again lately (after, well, quite a big hiatus, to be honest) and I think I might add my two cents to the debate. I am sorry if I end up with a long wall of text again, but I just can’t help writing such long posts when I have so many things to say XD

Of all the options listed by you, I think this one is by far the worst of them. I see multiple reasons for why this is the case. First of all. If implemented, this would become just a feature that disables other features. The thing with modifiers is that they alter gameplay to some extent and need to be played around. Trading firepower for not needing to worry about them doesn’t sound too exciting if you ask me.

Another reason is IMO the limited influence of environmental modifiers to begin with, which I think is a thing worth discussing a bit on its own. There is only a few of them and all of them are negative or neutral. I believe this system in general could use some more depth and variety, especially including the modifiers having positive effects or bonuses with drawbacks. One Idea like that floating around would be to give cold environ an effect of cooling down weapons faster. I believe this would make things much more interesting and exciting, especially if we invented more of those (or made some combos create unique effects perhaps).

The only way I see the environment ship being a good idea would be if we really had more variety of the environments, and if the special ship effect gave substantial new meaning to each of the environments and flipping them around, instead of just removing them from existence. For example: electric thunders cooling down a portion of your heat meter instead of killing you, hot environment giving a buff to damage or previously mentioned cold that buffs your heatsink. IMO if anything like this gets added, it better be interesting and engaging for the player, not the other way around.

Interesting idea. But I am afraid it can turn out challenging to execute properly. Both visually and from the gameplay standpoint. However, technicalities are kinda besides the point at the moment. I believe it has the potential to be a good and interesting addition to the game.

However, I am not really sold on the specific implementation of this concept you proposed. Having two weapons but not being able to hit lvl 10 or even 9 with any of them sounds eh. If it was up to me, I would experiment with having two pylons of your default weapon just being there, not changing. They would have the level of mounted gun divided between each other (so with fully upgraded gun, player would have two lvl4 pylons of that gun always on) And perhaps they would be unaffected by the gameplay whatsoever? And the other, main gun would be your standard gun, starting at 0 but capped at lvl 10 or 9 or whatver.

That’s at least an idea I have that could add some pretty symmetry to the whole concept, so it looks cooler and more polished.

This one is hard to tackle IMO, because it messes with the whole overdrive thing that is a hot topic on its own. So first I will leave some remarks on that.

In its current form, overdrive is not bad, quite cool actually, but suffers few important drawbacks that prevent it from being truly a nice and polished feature.

I am not gonna lie. I love the idea of resource/cooldown based overdrive/discharge thingy. From my experience in other games I played, being able to go infinite ammo and high fire rate for short period of time as a special ability, is always a blast to use. And to be honest, I would be totally fine if current overdrive was simply replaced by this system.

It just sounds much more exciting, even on paper, and also would almost for sure be not so problematic with guns relying on heat level such as Corn and Boron. And even though I know GgWw and other users proposed some very detailed implementations of such systems, I believe they are a bit too detailed and the same thing could be achieved in very simple and straightforward manner.

However if replacing the current overdrive system altogether is a big no-no, then I belive we should take care of weapons that are not working with it at the moment and fine tune them so they are in line with the others. Being unable to overdrive on Corn Shotgun and Absolver just feels terrible, and the very idea that Boron was designed with in the first place just falls apart with the current overdrive.

In fact, I might have few ideas on how overdrive can be ported to the three mentioned guns. If the idea of tweaking them sounds interesting to anyone, I might elaborate on that later.

I think that’s all I wanted to say, for now.
I am sorry for making it that long, but I at least hope it was worth reading

One Idea like that floating around would be to give cold environ an effect of cooling down weapons faster.

Already suggested. However, I remember iA responding with the thing that environments are supposed to be negative.

I would say that this ship can balance the levels of the other families, particularly the BX ones in my opinion. The dual weapon feature is unique since you can have 2 different weapons

i will choose the 2nd vote, because it seem balance to others

My vote goes to dual weapons (from that old ship faimily I made long time ago). Since we’re not discussing the max firepower as that can be trivially modified as needed, the only thing I could throw a suggestion is how to handle the present pick-up.

On one hand, it’s extremely useful for not accidentally picking guns that straight up bust your run (albeit damage-wise this has been very much lessen, the weapon mechanics themselves do matter) since your primary weapon will remain unchanged. On the other hand, one thing that may change for good is, if the present you pick is already on the secondary weapon, then it should change the primary weapon, for scenarios where you would be better with a different primary weapon.

Since maximum power is for sure have a handicap, losing freedom on changing weapons seems more of an unpleasant behaviour than balancing mechanic.

There’s absolutely no way for the game to just decide which weapon is better for the situation.