Nope, not actual metal, but rather the thing you’ve probably heard from the 1980s. This is my second boss idea!

Right off the bat, we have our chicken right here, playing awkwardly with the guitar!

And before we get to the attacks, I want to show off its base.
As with my other boss (Obi-Wan Chickenobi), its base HP should be at ~100,000, and it should be resistant to anything metallic or hot. Weaknesses? None, he’s so heavy that he can handle anything with the power of heavy metal.

Now for the attacks:
Technically, this is not an attack, but he constantly uses his guitar, hence why he should have his own boss theme. He’ll always play the guitar, even during his attacks, except during the “Heavy Guitar Throw”.

This is his first attack. While he continues to play the guitar, he’ll launch a ton of rainbow lasers, acting as notes that kill you, you know, like eggs. (Heavy Rainbow Dash)

This is the second attack. Very similar to the first one, but it’s one by one instead of shooting all of them at once. (Light Rainbow Dash)

This is the third attack. Very similar to the second one, but it shoots different colorful notes, faster and a lot more often. (The Notes of Heavy Metal)

And of course, the Power of Heavy Metal, by throwing the guitar like a boomerang towards the player’s spacecraft. (Heavy Guitar Throw)

The last attack of his, which is throwing his guitar directly at the player, with a colorful lightning strike. (Heavy Guitar Throwdown)

Finally, his “death” animation, where he just dissolves into the stars. Maybe the reversed version could be his entrance.

And if we have to introduce some unique quips, I have a few suggestions:

Entrance:
A. Hero: Time to get this party going on!
B. Hero: Let the show begin!
C. Hero: Show me what you can do!

Edit: The boss has been added to the game! Thank you, everyone!

Anyways, Does he move? If he doesn’t, then let him move. Because I found that standing still boss is boring.

These are just examples, I’m not stopping anybody from making this boss move, that way its attacks become even more lethal.

I need say, it looks so epic, keep it up

I think the wings would have to be made to look in a different way, since we never actually got a chicken boss that was holding something in its wings.

Coming soon to a galactic location near you! Presale tickets now available. 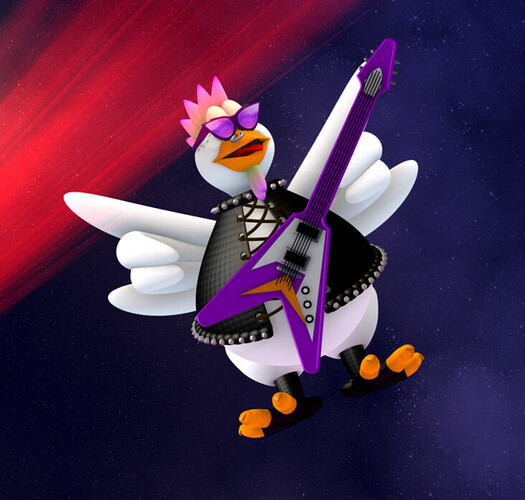 I need a name for this character, preferably a pun on an actual rock star name. Any suggestions?

Oh wow! Waiting for it

I bought this tickets for me and… Uh… maybe…

no one. (Joke)
Ideas for name:
Rock chicken (no please)
Henley the rock star

Looking for: Bassist, Drums and Keyboard

Is this a boss? Waiting to it in a double team (2 rock chcken in 1 double team)

Rocker Clucker (weird name to say)
and btw IA, will this boss be coming in double team? (totally gonna be fun)

How about Cluck Berry

I was first x]