So @GuestUniverse , your idea is letting top 8 players in each group into Knockout phase, and iA allowed that idea. However, after 3 days of Knockout phase, i can not accept this idea anymore. 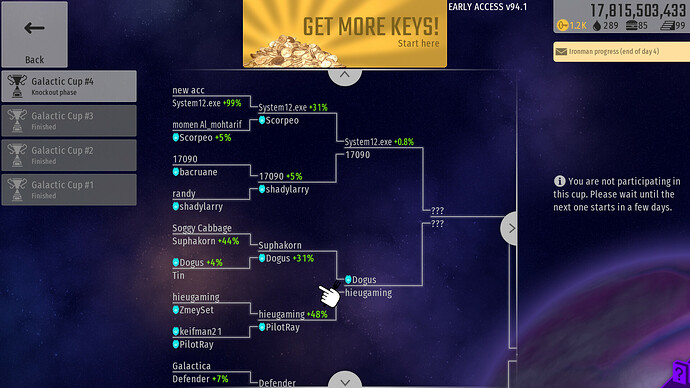 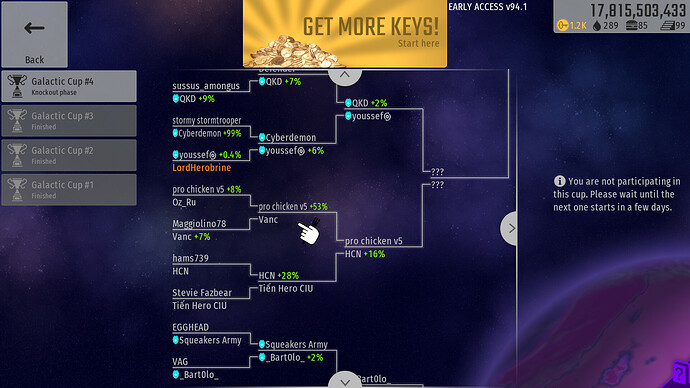 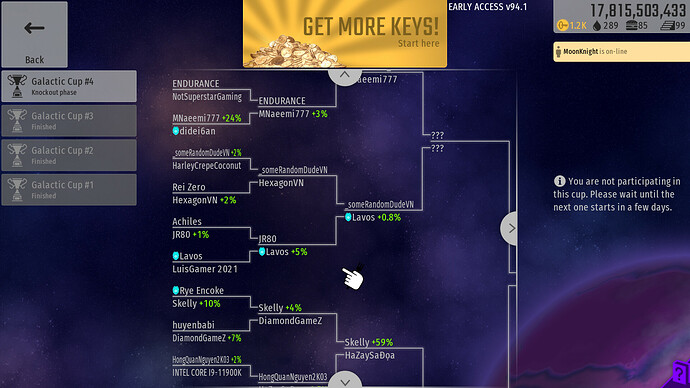 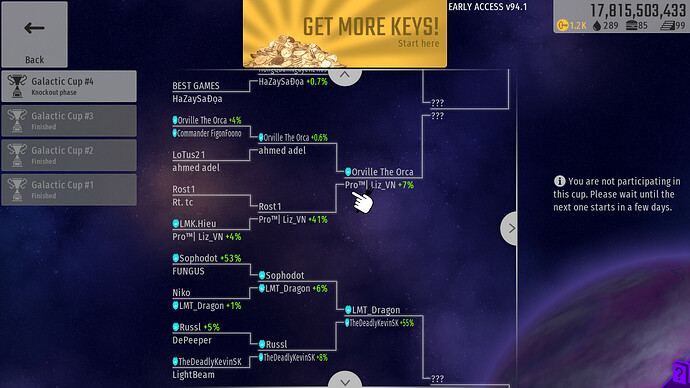 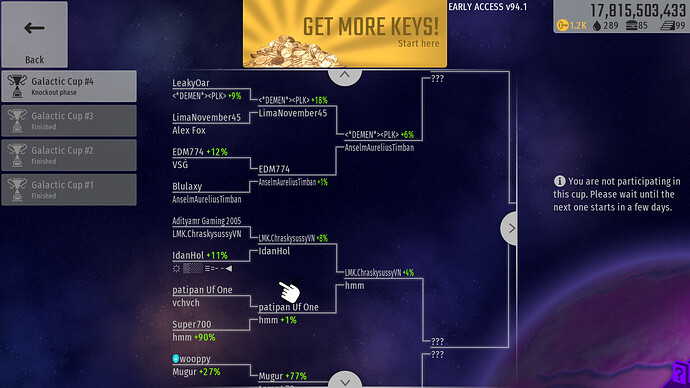 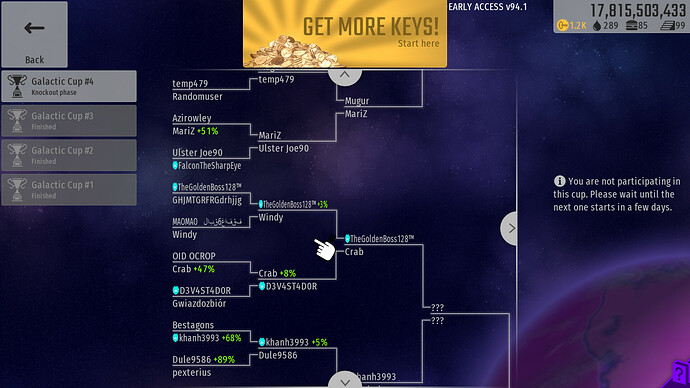 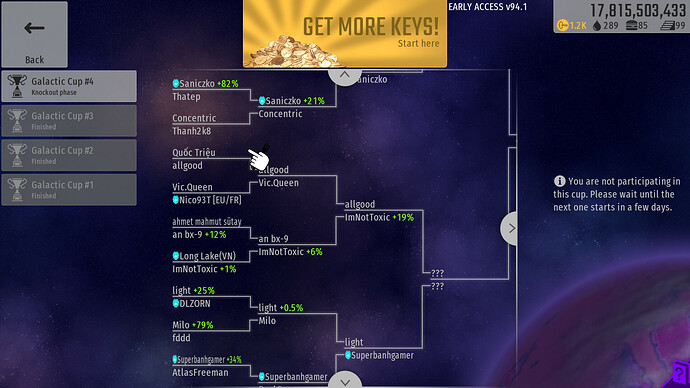 I see no problems with that, I just think key rewards should be more spread out. The problem is the community for this game is too small, there are not enough active players (previous seasons don’t even have 256 players in the entire world join in the qualification). Even in real life football tournaments can’t avoid shocking early exits by a former champion. There are a few groups where up to 5-6 players are truly dedicated, so top 4 will still be unfair for them.

But in many groups, more than 8 people are inactive.

The problem is the community for this game is too small, there are not enough active players (previous seasons don’t even have 256 players in the entire world join in the qualification)

I agree with this too, your idea can not be applied with a small community like this .
Also, seem like @Tin had the same idea like me. I didn’t read his idea before posting this. So this post should just be some logic to make his idea complete. Enjoy

If there are not enough 256 players participated next season then only 4 will move on though. Top 8 only applies to the full 256 players.

Even with that fact, remember that in many groups, there are more than 8 players were inactive

Even with the original rules for only 32 players, this type of problem is still unavoidable, especially if they know or message each other (thank god there is no option to message ingame except multiplayer, putting an extra obstacle in communication) and one of them is already rich in keys, is suddenly busy in real life, and know that they won’t win the trophy anyway. If you expect complete fairness, I think that can only happen in the top 4 (last two rounds).

But you know, expanding from 32 to 128 players made the unfairness i pointed out become so serious.

The number of players that advance to knockout is now capped to 4. Changed in v.96

So should we countinue our discussion @TheGoldenBoss128 ?

Because if you miss a day at Group Match(because of reasons that forced you) and there is a few players that have the same points as you(for example 4 players have 400.0) and in the final day you should be in the forth place but no, you’re fifth because the game listed a player above you even though they have the exact amount of points you have. This would be not fair because you can’t get to knockout phase because the game added another player that has the same points that you have.

8 players would give you more chance to avoid these types of situations.

Well, that rare unfairness can STILL happen even when there are top 2, top 4 or top 8 go to Knockout phase. So, i will have this idea for you.

Galatic Cup: Extra Phase
Condition to happen: When 4th and 5th in a (or more) group(s) have the same points.
Duration: 1 day
Rule:

I will make a poll then.

I will make a poll then.

Just my personal opinion, but i think you didn’t read my post yet:

I read you entire post before and I understand how you want to make knockout phase better and give it its own quality, but I didn’t relise that capping the player at 100 point would result in a situation like that.

Well, that rare unfairness can STILL happen even when there are top 2, top 4 or top 8 go to Knockout phase.

Yes, but at least with top-8 you got no excuses. Whoever is in 7th or 8th place(or lower) must be either not active or have weak skills. So it won’t really matter much for them imo.

I know that unfairness can still occur, I’m just decreasing the chances of it. It won’t be that much of a problem with 8 players than it would be with 4 players. At least when some problems happen and you’re inactive for a few days, you can still get back up if you’re good enough(which gives more chances with 8 players).

And what made me do that is because of how the most points player can get now is 100, this made it more worse to those who even didn’t play for only 2 or 3 days of group phase.

So, i will have this idea for you.

Also there is no point of that discussion anymore since GuestUniverse made a poll at EA topic.

But seem like players prefer the choice “4 players” more than “8 players”. Knockout phase must have it own quality. Also, if the ticket to advance is so easy to achieve, isn’t it less valuable ? Many players haven’t regarded it well

What if the unfairness happened to 4 or 6 players I the same group? That will result to more Extra Phases which will make other players more mad.

It’s likely impossible for 3 players or more have the same points like what you said as heck.

On my opinion the amount of players qualified for the next round doesn’t affect the fairness. Except maybe if it is possible to participate with more than one account (Is it?). Everyone has an equal chance. A win is a win - 100 points, it is not up to the player if his opponent doesn’t compete. However it is still unclear for me haw players with equal points are qualified. I believe it is fair enough to proceed like in sport. Even this situation is hardly possible for me when point are the same the next thing to see is the direct battle. If more than two players share a result we can see the exact points from missions between them.

In tournaments they use “seeding”

For me “seeding” is far away from fair. I think it is used to favor big players / teams for economic reasons.

At least when some problems happen and you’re inactive for a few days, you can still get back up if you’re good enough

This is also not fair. You are good enough when you can play according to the rules of the tournament.