since it’s an asteroid wave, i assume it will be there i guess.

I hope, I wonder it it will include at high difficulties that last asteroid from CI2 that takes forever to destroy

stuff from the next wave

will be included in asteroid belt waves too?

I think no. It doesn’t fit meteor storms chaotic feel (Even if the last one was)

Any chances for this? [ci1]

I noticed that when you click on your items stored in your mission slots, the left menu rolls right where the item is located, like when you click the Dimensional Phase-out and it takes you to your special weapons with the item selected.

But why that doesn’t work with the Damage Amplifier special weapon? Is that a bug or intended?

I have an idea for test new level. add a section in Messages after updates
Where a new wave is added.
In this section, we can test the new level with different levels and report bugs.

No pls. I wouldn’t like an object not found button

Can’t hear it. They’re probably caused by a sound effect overriding itself. But which one? I guess it’s either the Photon or the Asteroid breaking up. Do you still hear pops firing the Photon in empty space?

Can we have sort option “By squadron” in assignments?

Not easily, because the server doesn’t send that information. I’ll revisit this soon.

Any chances for this? [ci1]

You mean you’ve suggested it before? Granted, but I don’t think concepts from previous episodes should count as “new ideas”.

But why that doesn’t work with the Damage Amplifier special weapon?

Do you still hear pops firing the Photon in empty space?

No, this only happens during astreroids. EmeraldPlay took a guess about which file does this.

I actually like hearing it, anyway I’m going to make a poll to see how many people likes it and how many doesn’t:

Also when your core shotgun overheats do you lose the “not overheating medal”?

Also when your core shotgun overheats do you lose the “not overheating medal”?

nope. since the corn shotgun is a non-overheating weapon, then you won’t lose it.

so I encounter again the same boss in a 4x5 mission.

what was the probability that this happen?..very low I think!!! bassically I encounter the same boss in regular missions and boss rush missions at least 10 times…how many boss that we have at least 20? so I think that there’s no need to have the same boss in a mission!!.. @InterAction_studios there’s something to do to stop that happening???

That’s normal. Chance to get the same boss is 0.01%. while getting the same wave is 1% chance. Read this for more information:

Bug Theoretically speaking, it’s still possible to get the same boss (or any wave) twice in a row (with a probability of 0.01%). The probability of getting the same wave twice (but not consecutively) is 1%.

A bit of a minor thing, but why doesn’t the Alien Container wave of supernova missions have its own name? CI4 had it, so I can’t see why it shouldn’t be added to Universe.

@InterAction_studios Not sure about that, but is it possible to make auto mount work on mission config as well? (yes, I have the option enabled) 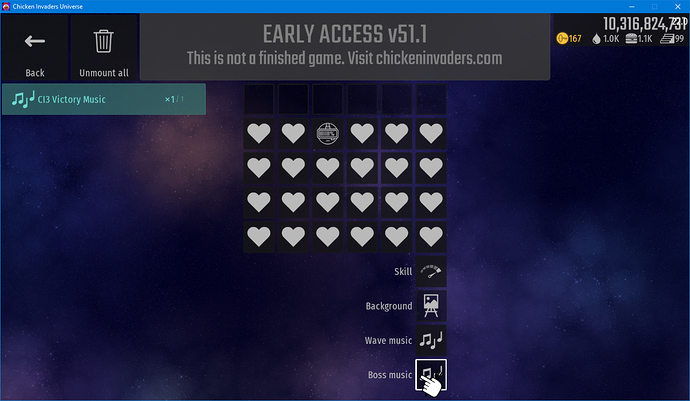 No, this only happens during astreroids

Well, this is part of the sound effect. It’s supposed to be a rock breaking up sound, so it’s natural for it to start with a “pop”.

OK, you’ve proven your game design choices through a random YouTube video before, so link us footage for a rock breaking with a “pop” so that we’re all on the same page.