I’d like to present two weapon ideas that I was focusing on for the last few days.

When I was trying to think up some weapon concepts I realized that the game still lacks one thing: a big cannon.

The weapon fires a high-speed projectile which continues to accelerate until it reaches it’s target, at which point it creates an explosion (similar to that of the Mine Bomb, but not delayed) that deals a high amount of damage to all enemies caught in the blast radius.
The Cannon has a fire rate of 1 shot per second consistent across all power levels. The size of the projectile doesn’t change between

0-10, instead the speed of the projectile is affected creating a larger explosion and increasing the damage.
The weapon deals 300 damage at

A major change occurs at

20. The projectile is now supercharged, it becomes larger and it’s hue becomes more reddish. The damage is increased by 1000 and the explosion is around twice as large as at power 10. The speed of the projectile doesn’t increase. 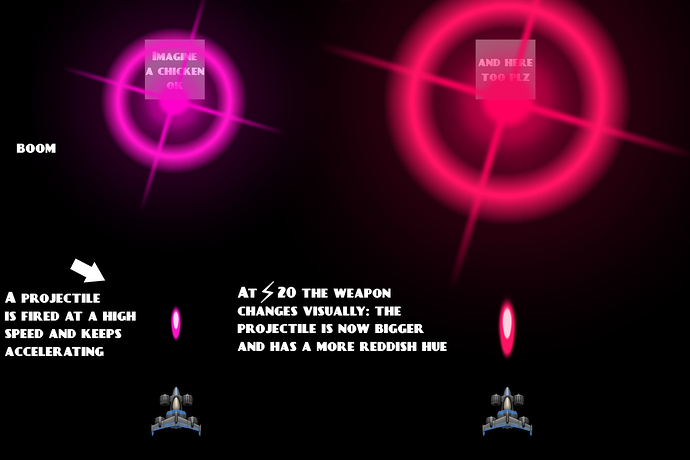 The weapon should be able to fire around 10 continuous shots before overheating.

The Pulse Cannon’s gift would be pink with a white ribbon. 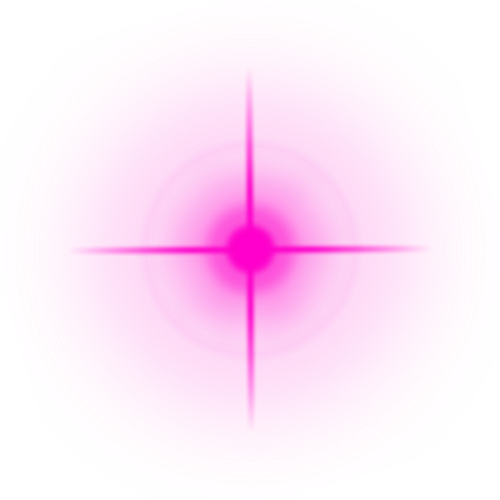 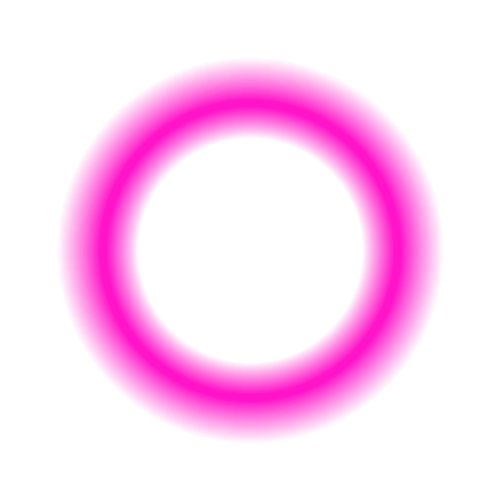 And the supercharged versions: 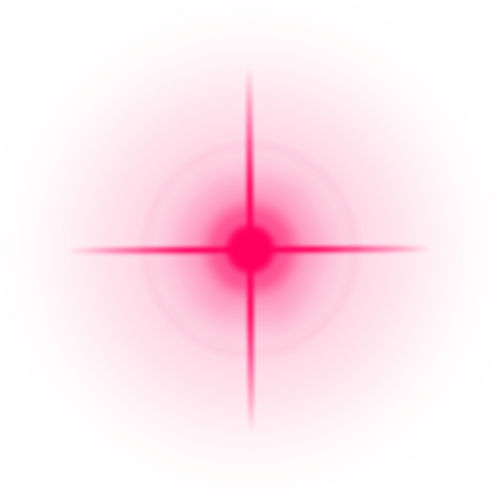 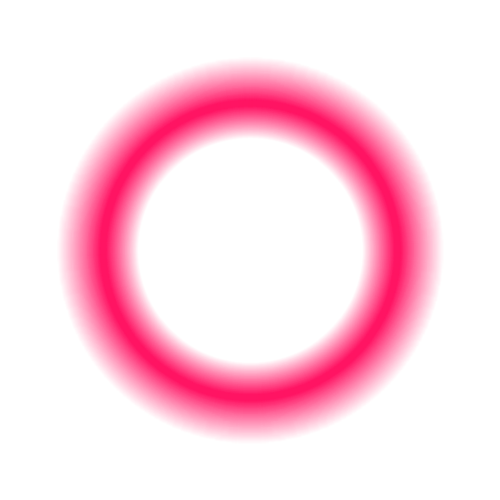 EDIT: There is, unfortunately, an issue regarding balancing the Pulse Cannon. In it’s current state it has a purely rubbish damage per second of 3000 at

20 (over 2x less than Vulcan Chaingun). On normal waves this is countered by the AoE effect of the weapon. However, there is a problem with bosses. Since, for the most part, there is only one enemy per wave, the explosion doesn’t help at all. Which means that this weapon would be severely underpowered against most bosses.
I guess it could be worse, at least it still deals damage. But the fights would be rather long.

I have no idea how to fix this so if you have any ideas, I’m open to suggestions.

EDIT2: So @Orandza had a simple solution which I’d (obviously) completely overlooked.

What’s changed: we get extra damage on impact. At

20 damage would be 5000 on impact (making it just bearable to be used on a theoretical boss with 1 million hp) and 3000 for the explosion. Not really sure about the numbers for lower

This one was created because we just don’t have enough green weapons.

The weapon is fully automatic, like the Boron Railgun, but fires rather slowly in exchange for more damaging projectiles and slow overheat. The weapon can be fired for ~10 seconds before overheating. The projectiles would be just slightly slower than the Vulcan Chaingun’s.
It has another peculiar characteristic: unlike other automatic weapons it never fires all of the active weapon pods at once (except for

0). Furthermore, the order of the weapon pods is random, creating random firing patterns.

I finished reworking all power levels today, since the previous version was very underpowered. The current setup should have (for the most part) a slightly lower damage per second than the Boron Railgun.

The image below shows all active weapon pods for every

level, and whether the pod fires a weak (short) or strong (long) projectile (225 and 400 damage respectively). 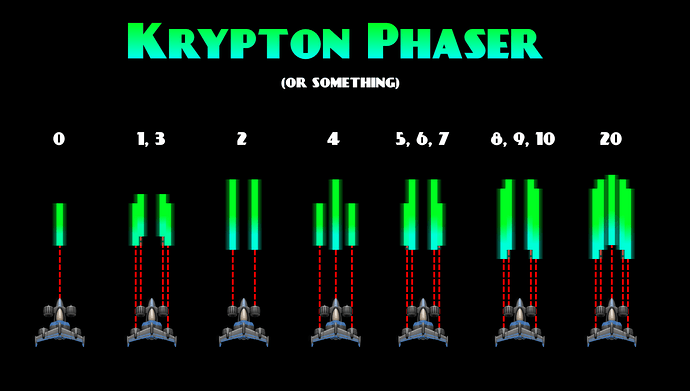 Of course these are not actual firing patterns, as the number of projectiles fired at once is limited. 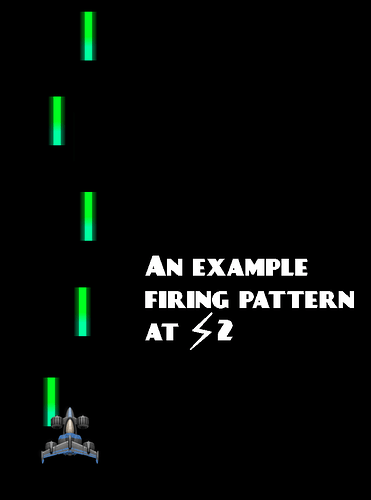 The firing patterns would be as follows:

The Krypton Phaser’s gift would be green/blue with a light blue ribbon.

I’ve also made some sound effects that could be used for these weapons. All of them were made from scratch in Audacity (don’t expect much, it was mostly improvisation by a guy without any previous experience in making any sounds whatsoever): https://drive.google.com/open?id=1ZBMyLz1tdKWYkcOFVkJazqjIpytGIS0p

I’d like to hear your opinion on these weapons and any ideas that could help balance them better.

(Speaking of automatic weapons, I believe the Vulcan Chaingun should be buffed, considering that it is outclassed by the Boron Railgun in nearly every way.)

The pulse cannon idea is really neat! I like it :). On the other hand,Krypton Phaser sounds like just another vulcan chaingun,and I don’t like it as much.

Pulse Cannon feels like it could be a bit on the unbalanced side when it can fire 20 shots with a blast radius continuously before overheating. I’d say keep it fewer, around 5-8 shots.

Krypton Phaser is a neat idea, but it kinda makes the “Vulcan Chaingun” type of weapons more numerous than the others, which… I don’t think it might be good for the weapon variety.

Oh,yea,the overheat might need to be nerfed slightly. Maybe down to “10 back-to-back shots” before it overheats?

Pulse Cannon and Krypton Phaser are both great weapon concepts.

The pulse cannon sound great but I think it should fire 1 shot every 5 seconds and the time take to hit the enemy so it would have the slowest travelling projectile so that it should take some time so that there is little sound overlap so it does not get annoying.

The Krypton Phaser is similar to the vulcan chaingun, boron railgun and the hypergun. If is it was different like it was able to penetrate enemies, probably 3 to 5, depending on how much the player charges it, it would be different. It would be a new experience.Most people wants a new experience and this would definately be a new mechanic.

In general these weapons are great ideas but the pulse cannon weapon is overpowered in its current state and the krypton phaser is a slightly similar to the already existing chainguns.

About the phaser: it was really just a random idea that I came up with when I was pretty much done with the Pulse Cannon and I agree that it’s not as good. I was hoping it would be just different enough from the Vulcan Chaingun and the Boron Railgun but I guess I could’ve come up with something better.

This, ladies and gentlemen, is what the Heroes Academy does to people.
It makes them geniuses.

Though it was posted long ago but I think the pulsecanon can be a satellite and should be geven in CIU.