It would be nice to be able to click on the score multipliers and such stuff in-game and know how they are calculated rather than search for them for a while and still not find them.

Take this screen as an example: 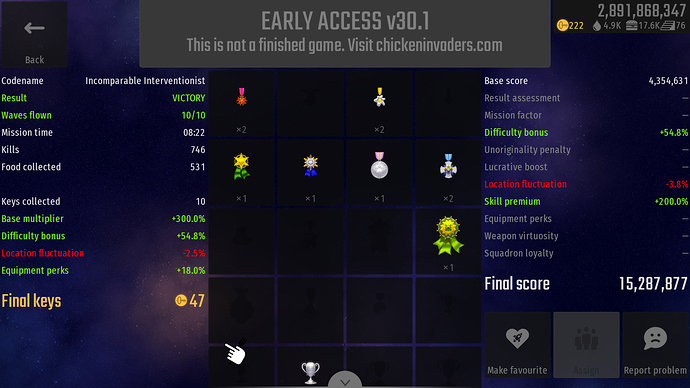 The first ones from left are easily understandable, such as food collected and keys collected.
The comes Base multiplier, location fluctuation and equipment perks. For Location fluctuation, I’ve been able to find this comment which explains what it is and also how the unoriginality penalty works

The unoriginality penalty appears when you play the same mission multiple times in a short time. Location fluctuation is basically a fluctuating value in sectors that makes the rewards sometimes more and sometimes less. Sort of like a random bonus or penalty which you cannot affect and is dependent on luck. The base multiplier right now is for tasting purposes and serves as faster farming way. The difficulty bonus gives you more keys depending on the mission difficulty (the orange bar), and the…

As for equipment perks it is also said here:

This bonus is affected (positively or negatively) by the equipment you had mounted when flying the mission. Currently, the only equipment that affects this is the H&C 101/201/301, which gives a positive boost if you use it.

There are also the ones from the right, some can be understood once playing the game for a while, but some, such as Lucrative boost I did not know until I’ve searched and found it here:

Currently, “lucrativity” of a mission depends on its planet. Planets that are harder to get to (e.g. because they have electic storms, or are hot) receive a boost. Lucrativity only affects score, not keys (this is intentional)

Also, there are still questions regarding how multipliers are given in specific missions, what is their maximum amount and many factors that aren’t exactly clear.

What I mean is that rather than searching for how every score multiplier works on the forum, it would be much better for it to be implemented in-game just by clicking on the multiplier itself since I’m pretty sure there are a lot of players that would like to know how the score and their multipliers work but it would take some time to find all of this stuff.

I consider this to be a huge quality of life that should be in-game since it would clear very many questions regarding how the score works.

Thanks for your time.