Hey there! Long time no see since the last idea, eh?

I was thinking for some time: if we have chickens and droids in CIU, then why we don’t have combination of these seperate types of enemies.

Each enemy coming from this type not only have a health multiplier bonus (that means robotized chickens have more health than their alive counterparts [calculated after calculating health to normal ones depending on difficulty]), but some unique traits as well (such as Assist ability which makes other chickens on the screen to protect damaged ones):

-Bandana RoboChick
x3 health multiplier bonus; shoots a waste directly aimed at you (like UFO Chicken); same tactic as Bandana Chick (that is ‘comes closer to you while being near him in a particular range’)

-RoboChicken
x2 health multiplier bonus; shoots eggs more frequently (applies only for those based on normal or military breed); shoots drone eggs that cracks up even closer to you (drone egg’s yolk has wider range) if it is based on pudgy breed; bounces off the projectiles even further if it’s based on military breed (additionally calls other remaining RoboChickens for assist);

-Chickenator (robotized Chickenaut)
x3.5 health multiplier bonus; shoots 3 green neutrons 3 times (each one of them on seperate, random angle); calls all remaining enemies for an assist;

Whew! That was a long list! What do you think of it? Is there something overpowered of too weak?
Let me know in the comments if there’s something to fix!

@InterAction_studios please consider adding this to the game

their resistance to some weapons

Well,that kinda makes it…easier,actually. Droids are weak to metal weapons,one of them being utensil poker. And no,they aren’t strong against anything.
I have nothing to say about the rest of the stuff.

Ask : is the health multiplier is based on its normal chicken counterpart?

Well, i think it’s not a problem to add them, unless there will be a wave consisting all chickenators

Assuming they will most likely replace most chicken variants with themselves for whole waves, not only is more health boooriiing, practically nullyfying the fact that SSH doesn’t increase chicken HP. Things like Chickenauts and the similar blue shooty spaceships do have more health but are rare enough to not overwhelm with their attacks and HP (Except epic waves). These chickens would also give you no food, making harder missions even less key efficient (I made the whole scrap collecting idea which could make this more viable though).
I’d also like to know more about the whole calling for assist thing.

But what is the assist ability?

It’s calling for defending someone before being dead/wiped out of existence. Is that what you want?

Well I wanted to know if it like spawns a new chicken, makes others protect it or something. You gotta say what these things do! Also “defending someone” still can be both of these things.

Since Robotic Poultry is a combination of droid (weak to metal weapons) and chicken, I had to buff this type in some way, that it’ll be as strong as normal chicken enemies (or beyond them) and not as weaklings.

That’s why I’ve implemented health multiplier bonus to all of them!

Interestingly, there were plans for a robotic chicken boss for CI3. Looking at the files nothing ever came of it (well, except for a metal wing), most likely because it exceeded my 3D modelling skills (as most things do

will it come back in CIU like ninja chick?

Well, my The Mechanical Menace boss idea was liked, so “possibly”.

So, will it be possible that my idea and (possibly) recreated RoboChicken boss would work together in some way?

I haven’t ſeen it, but I’m gueſſing it looks a bit like a wing made of metal.

Use your imagination? It will looks like the U.C.O’s in CIU maybe. 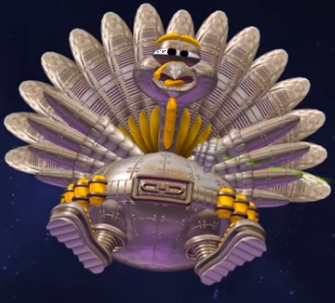