“Inverting laterally” is the same as mirroring. Do you mean “inverting vertically” (a.k.a. flipping)? In any case, all waves where this would make a significant difference already offer this. I don’t want to go edit 100+ waves just to add vertical flipping, especially since that’s significantly more disorienting.

@InterAction_studios I’ll continue this via a new thread.

I didn’t mean it as “inverting vertically” only as horizontally. Making waves invert vertically would be harsh for some players, especially they’ll need to familiarize again with the “shooting downwards” environment. Some boss fights will be awkward as well.

I meant it as a mission add-on that is equippable for the entire mission, a new suggestion. Although it doesn’t (almost) affect some or many of the waves due to their random nature (Swimming in Space, Gyroscope Malfunction, etc.) or uniform formation (Chicken Quadrants, Soft in the Middle, etc.) It is applied on boss fights as well, like Special Needs’ left-to-right entrance instead of its right-to-left entrance.

Applying wave variations:
If Mission Codename X: has the wave Highway Chase that has chickens going from left to right. Then this add-on will make them go right to left.

Assuming that Mission Codename Y has applied Akemisora’s suggestion, where the wave Highway Chase had chickens going from right to left. This add-on will make them go left to right.

The icon will look similar to this: 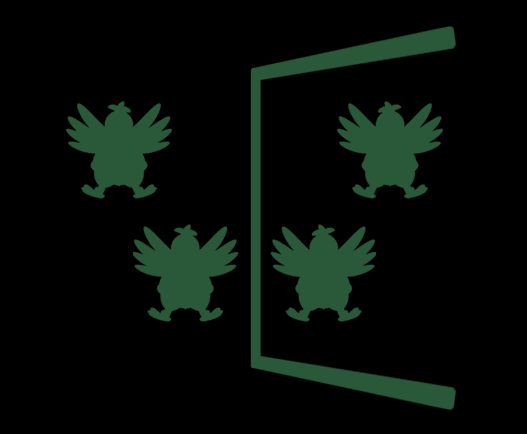 Sample wave without the add-on: 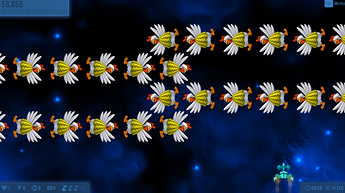 Sample wave with the add-on: 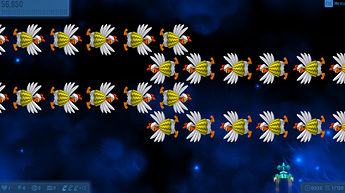 The price should be low enough, as this is purely cosmetic in nature.

*Applies on next mission.

OK… what’s the purpose of it though? Seems rather inconsequential, especially considering that I don’t think it would be a simple code change (could be wrong though).

Only to invert wave formations horizontally (mirror), unfortunately. An alternative is added. This could be more significant on touch-screen users.

If we have this on, will comet chases appear on top of the screen instead of the bottom?

This could be more significant on touch-screen users.

I guess that’s a fair point, but if it’s a quality of life feature should we really be treating it as a consumable with keys?

I’m not sure that it’s necessary, but that’s just my feeling.

If we have this on, will comet chases appear on top of the screen instead of the bottom?

I think it’s more of a lateral/horizontal inversion (flipping from left-right, not up-down).

I don’t think it’s worth doing a purchasable over this. I could go over all waves again and see which ones would benefit from a (random) flip/change-of-direction, though. On the list.

To add that, you could do a type of mission called “mirror mode” or even add a “flipped” planet design where all the missions there are in mirror mode. They could also make the mission start with the boss and end with the first wave (that is to say, a “reverse” mission) but the latter is more of a personal idea.