Do you rmember CI2?
i do, back then you could clear the campaign alone or with another player!
One with mouse, and one with Keyboard. This CI has some great multiplayer with a lot of people in the Universe! so why Co.Op isn’t a thing? like… two players, two Ships on the same level, it would be so cool!
(obviously when you play with someone, the difficulty level can rise a bit to compensate…)
but the general idea is this…

: Will there be co-op multiplayer?

: Maybe later, but very likely not before the game is released, nor shortly afterwards.
Multiplaying
https://youtu.be/ZzYRPixc5e0?t=3976 1:06:16

Here.
Also this from today’s conversation. 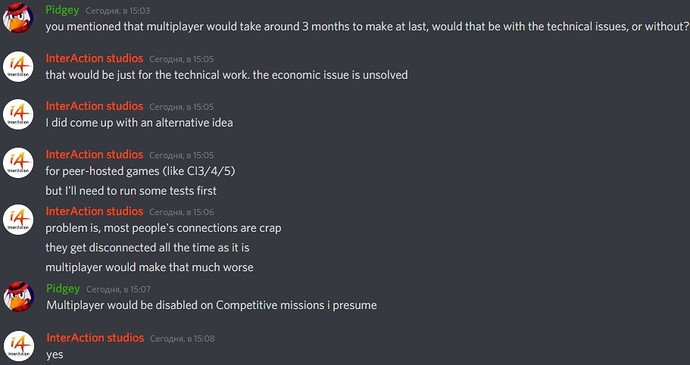 oh, yes… i’m not pretending anything to the devs obviously, the game’s not even finished but yet it’s beautyful as it is. oh!, and thanks for the info.
i will first document myself before asking theese arguments in the future

I know that personally, I’d be perfectly ok with a 3 month development pause if it meant we got multiplayer before the end of EA. I’d actually settle for twice that.

The game’s making money, now, too. So that’s no longer taking up the “higher priority” concern.

Best way for that would probably be to first bring new content into the mix to keep people busy, and then try developing multiplayer. I still don’t know what IA’s alternative idea for co-op/multiplayer is, but let’s hope it works.

This is just a guess but I think he meant that one player works as host for others in mission: it receives stuff from server and redirects it to other players, then receive response and sends it back to the server. This would make some kind of co-op but issues like high ping between faraway players would be kept. Also I have no idea how cheat system would detect incorrect behaviour of other players. And if the host disconnects, everything dies.