Lines of code for each Chicken Invaders game

This is something that I recently calculated out of curiosity, and I thought it would be useful to share (at least, to those of you who are interested in the implementation details). At the very least if should serve to explain why the game is taking so long to complete

This is a chart of how many Lines of Code (LOC) each Chicken Invaders contains. I have excluded all 3rd-party libraries, auto-generated code, and comments. I’ve also shown how the total is divided between OS code (this code changes completely for each platform), engine (UVE for Windows/DirectX only), language (text for English only), menu system (everything before you “Save the World”), and the game proper. CIU also has an additional MMO layer which handles the galaxy (server code is included here).

CI2/3/4/5 share the same underlying OS/engine/menu layers, which is why there is seemingly no change between them. CIU has a large part of these layers re-written, and the plan is to eventually back-port it to previous episodes (this is very low priority, but might become urgent as DirectX 9 becomes increasingly outdated).

Perhaps it will inspire some aspiring game developers out there. Or deter them 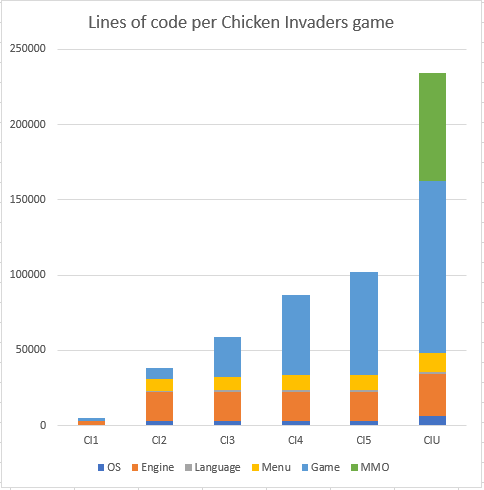 Does that mean that CIU has about 233540 code lines? That’s insane man, props to you for being able to keep it up with that

Yes. That’s why I’m always striving to keep code complexity down, and why I must reject new features that don’t fit well with existing code and/or mechanics.

Would this be an inopportune moment to ask what ideas you have in mind for CI6, after doing CIU?

Now the fact that Bossa Nova has as much lines of code than ci1 looks even more impressive!

It’s much more work “behind the scenes” than I tought.

Maybe coding isn’t as easy as I tought but it won’t stop me from learning it!