I'm not there at all!

Item called: I’m not there at all! Or if you prefer: Hologram. Aims to fool all enemies.
The ghost and rather the hologram of the Spacecraft, appears on the left or right side of a real spacecraft.
All enemies think that the hologram is a real target, and all the bullets and eggs are sent towards the hologram, and your Spacecraft is a bit safe. 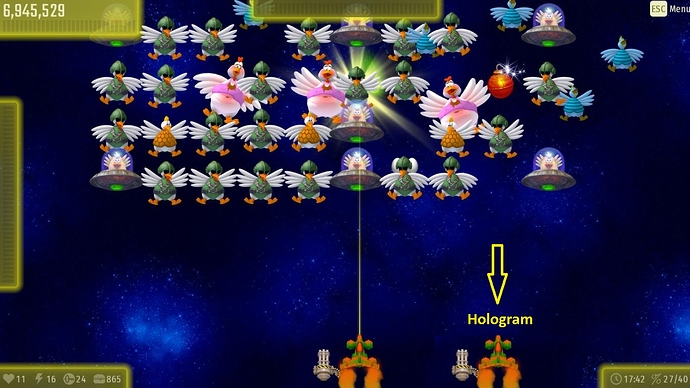 This reminds me of a Super Mario 3D World’s double cherry, I like it

That’s already suggested, although the difference is about its appearance:

Note: Updated as of May 18 Features: When this satellite is used, bullets and enemies normally aimed onto the player will be directed to the decoy. The decoy had no hitbox, therefore enemies could stick to it like they were baited and bullets will just pass through. The decoy, when launched stays at a fixed position for a short period of time, probably 15 seconds. There will be a short delay before the decoy would activate. This can only be launched one at a time. If the player is already equ…

Traveller points out that this is better as a perishable.

There is still a difference that the Hologram does everything that Real Spacecraft does until the end of the mission (aside from inflicting damage).

The decoy idea is on the list since last year.

However, I’m looking at the code now, and there’s really not that many places where attacks are specifically aimed for the player: assassins/terminators, a couple of bosses, chick gatling guns, a few metal chickens, and that’s it.

I was going to put it in as a special weapon, but now I’m not sure if it’s even worth it.

assassins/terminators, a couple of bosses, chick gatling guns, a few metal chickens, and that’s it.

Also, sometimes it’s a benefit if bullets track your position, because you can use this strategically to draw them to one area of the screen, keeping other areas clear for use in future evasive maneuvers.

What if it also distract the terminator chickens?

These are some of the most dangerous enemies in the game, and also some of the least balanced (especially cowards).

I’d still be interested in seeing a decoy mechanic during EA.

of the least balanced (especially cowards).

I don’t think they’re unbalanced. They juﬅ make the game a bit harder than it was before they were added, which given the percentage of people regularly playing on SSH is not neceſſarily a bad thing.

They’re unbalanced in the sense that they skew the weapons roster in favour of high damage-per-projectile weapons. They are not too hard in and of themselves, but they have an unreasonable leniency toward specific playstyles.

an unreasonable leniency toward specific playstyles.

It’s true that they encourage more pinpoint targeting rather than ſpreading death and deﬅruction indiſcriminately, although it’s worth noting that

If you ask me, the cowards actuälly have a balancing effect overall.

That was mostly true until plasma became the best weapon.

Still, there’s a pretty big balance coming in the next update, so it may be wise to wait for that before I start making remarks about what is/isn’t balanced.

This is not a bad thing in all situations. As a matter of fact, it’s generally better.
The only reason Utensil was the most used was because it still had very high DPS even with the spread, and it has a low heat rate.

It’s worth noting that the lock-on area damage of plaſma triggers nearby cowards.

This is not a bad thing in all situations.

Very true, but when fighting ſome of the boſſes, no ſpread can be a problem. Alſo, ſpread weapons tend to have a higher projectile count.

Manual fire is still there for that. So Plasma can at least counter cowards in some way.

True, but if people are ﬅill uſing automatic weapons manuälly on a regular baſis, then there’s more work to be done. Maybe there ſhould be a longer delay between ſhots when firing manuälly or ſomething.