The galaxy was supposed to be reset with this update, but so many little bugs & fixes cropped up in the meantime, that the reset has been postponed. As a reminder, a galaxy reset means:

Also, try out the new “Anonymize player” option. Post any leaks of personal information you find while using this option here, because it will probably be too late if this is discovered during a live stream

The network protocol in this update is incompatible with previous versions, so if you try to log in with an older version, the server won’t be able to even notify you about the upgrade – instead, you’ll be kicked out without an explanation.

League screen: Removed buttons to dare self and admins.

I suggested this before:

I think “Dare” button should be removed instead of it saying:

Oh nice, I can attempt to get my exploration medal

Oh double nice. Now streamers and shy people can play around without having big issues of being sniped or harassed.

Streamer mode still displays your name in stats, comparison and league screens though.

Also, squadrons name still can be seen in the shop. 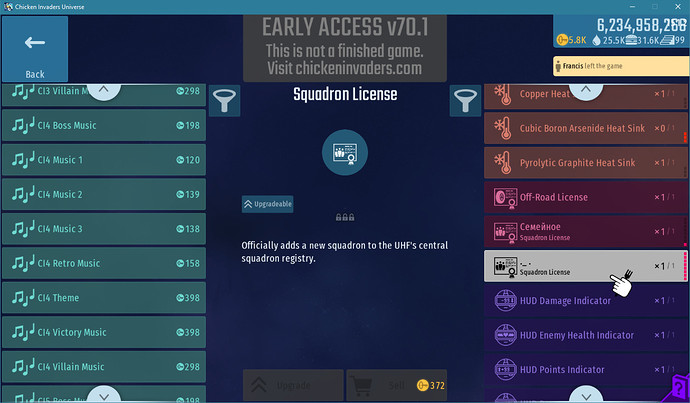 It’s nice to see the Legal button in the game and information about IP owner, but I’ve got some things to point out.

I don’t want to bark on this since I really do not have a problem with it, but I can imagine a mobile version of the game and mobile players struggling to just press this button. They’d have to press it either with their pinky or just play the game.

I actually got a little idea about it. How about place this information when you launch the game? Just a black screen with legal information that displays for 3-6 seconds and it fades to black and then game starts. Many games do that and gamers don’t have a problem with it since you’ll be able to skip it. Sure, the button can still be there but that’d be convenient for the creator

Gonna say it again. I really, really don’t have a problem with it. I just want to support and give a little feedback

By the way, this poll seems to have gathered a lot of support:

I suggested this before:

At “Black Hole Skipping/Hopping” wave there’re 4 groups of enemies, all of them come from the same black hole

That’s a different kind of bonus. It’s called multi-kill for a reason.

streamers and shy people can play around

It won’t help shy people. Anonymize player just affects what you see on your screen, not what other players see.

Streamer mode still displays your name in stats, comparison and league screens though

Intended. Even if you anonymize the name, these screens make it easy to know who is playing just by the ranking. So I decided to leave the name in, but it’s not highlighted and the list doesn’t directly jump to it.

squadrons name still can be seen in the shop

this poll seems to have gathered a lot of support

You realize if it goes back in, it’s going to be exactly as it was. There’s no “nerf” that can be performed.

How about place this information when you launch the game

I’ll consider it when the time comes.

You realize if it goes back in, it’s going to be exactly as it was. There’s no “nerf” that can be performed.

Maybe what OneWing suggested could do the trick

people gotta learn how to dodge and not spam phase outs how do you call yourself a pro if all you do is use phase outs to cheese all the stuff in ironman To answer Francis: Perhaps just make it with only 1 line of meteors and not 2.

make it with only 1 line of meteors and not 2

What does this mean, exactly?

It won’t help shy people. Anonymize player just affects what you see on your screen, not what other players see.

I misunderstood it then. My bad, again.

The meteors came from 3/2 directions if I remember correctly. I think they suggested making them come from 1/2 directions only.
If it’s not possible, I guess it can be added without nerfing it

Did you re-login as the tips says?

Will those with the exploration medal be able to get another one for exploring the whole galaxy again? I don’t own one but I’m curious if that’d work.

iA said we won’t but that would be fair :(

i think world building npcs would be nice

The galaxy map is being reset in the future?

That won’t eliminate my personal progress with currency and vehicles, right? I don’t wanna lose my definitive Academy Fighter.

Is it possible to increase the key bonus of the H&C spacecrafts, I think 18% is not enough especially for those people who has just joined UHF recently

And can dare points be awarded based on dare difficulty even though the score of the opponent is almost near to the darer’s score (and vice versa).

Does that include “The King of Crabs” or only “Giant Robotic Space Crab”?

Also you need to move the coordinates up & right a little so they can fit there:

is hidden in galaxy map whenever you click on something like players, planets, etc… can you fix it?

Why some bosses rarely appear like “It’s the Mother-Hen ship!” at high difficulties? While some appear a lot? Is it possible to balance them.

Can you add the CHL badge to the required textures?

Can you show days too?

I dared Arnav normal dare but it won’t let me dare him a friendly match:

Why? I know I can dare friendly matches multiple times a day.

How about at “It’s the Mother-Hen ship!” the yolk shoots faster the more it gets redder/hurt? Make it slow at the beginning.

Could you buff the key rewards x3 at most active daily/weekly?

Could Magnetic Manipulator spawns 2 asteroid patterns instead of 1? This will only apply from 100 difficulty, but make the asteroids slow down.

I noticed that hot & frozen Ironman are in order, like this time it’s hot, then frozen, then hot and so on. Is it in order or random? I’d love it to be random.

Could you add “League” button here:

I almost crashed into “Feather Brain” was about to destroy it, then I didn’t die luckly but the weird thing is that it didn’t drop any food.

Could this be fixed:

Why there’s no multi-kill at Feather Fields

There used to be before.

you said before that I need at least 10 shots per wave for it.

Could you enable Ctrl+C, Ctrl+X and Ctrl+V? To be easier for emojis.