Another update with a multitude of small fixes and quality-of-life improvements. We’re now getting very close to the point where the galaxy will need to be reset. This means:

Everything else will remain the same.

Also, due to changes in how dares work, all in-progress dares have been unavoidably reset.

All planetary missions will be deleted and completely regenerated

Planetary missions? But those aren’t in the game yet. Or did you mean the environmemtal hazard ones?

I mean missions present on planets/suns (i.e., not challenges or league missions)

Taking server down for backup. 15 mins.

What’s with the red screen at startup?

Nah, I prefer red to white, because Windows tends to whiten screen when an app is not responsive (which would not be visible).

I’ll go try out the new mother hen ship. Will tell if more bullets are preferable.

you again
the account was reset
always reply from U.C.O 5

nothing important but can it be blueish like the default UI?

can there be an option in the installer to not make a ciu folder in start menu? i try to keep all the games in one folder

I caught it in time … THAT’S HOT 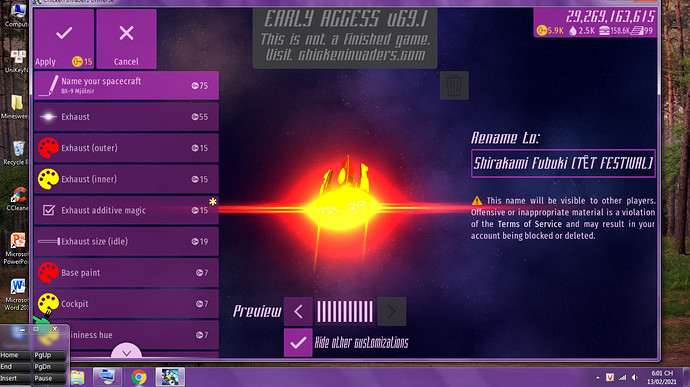 Nah, I prefer red to white, because Windows tends to whiten screen when an app is not responsive (which would not be visible).

Was there not a better option available? Like maybe purple?

Obviously not blue, since that’s an error screen too.

all white for pure blindness