This update snuck up on me – I didn’t realize how quickly so many small changes added up (well, some bigger than others). Regarding the new item “Pecking Order Revealer”, recall this: Early Access version 66 - #72 by InterAction_studios . There have also been several changes to how League dares work; check out the changelog below.

Will this be added or not IA? (Sorry for ping)

2 ideas SPECIAL BOSSES IN OTHER MISSIONS for example the boss of super nova (bossa nova) have a chance to appear in key rush, darkness, chicken invasion KEY IN Squawk block can in squawk block missions after each wave drop keys?

Were dares in progress removed again? 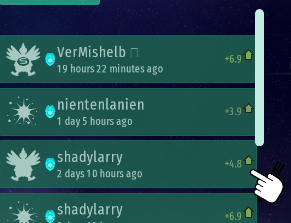 Oops, yes. It was unintended, but they should have been cleared anyway, because the rules have changed.

iA, can you friendly dare anyone regardless of their score because it doesn’t affect the points?

No, the rating limit still applies.

Will this be added or not IA?

Sad, I thought we could friendly dare anyone regardless of the limit

That’s not possible currently, because the state (enabled/disabled) of “dare” buttons is decided before you choose whether you want a friendly dare or not.

Supporting your change would require a larger restructuring, so, uh, no, at this present stage.

Be quiet about this or else I will tell IA not to add it.

I am seriously going to kill you

Stop spam
If it gonna be added it is not now

Early suggest by me

IA can you make armored chicken eject a chicken upon death?

And it’s out of logic