Alright, time to look at some code.

** To be fair, I do see a few private keywords in UVE’s source code. So I was definitely aware of it. Regardless, there’s a good case to be made for making everything public by default, especially for small projects, because it minimizes the amount of boilerplate/scaffolding code (namely, “getter” and “setter” functions). Certain very prominent programmers still advocate the “everything public by default” approach.

**** I still don’t bother with that – it just slows things down. But nowadays at least I’m using automatic code formatting, which takes care of that for me.

***** Although there’s some merit to that idea, the programming burden to pay is sometimes too high.

I spend the next few hours furiously hacking away at the code, trying to get it to a compilable state. I’ve already explained more about this stage:

Our next milestone is to get the CI1 code to compile inside the CIU framework. We want to get the absolute bare minimum to compile (but not necessarily actually work correctly), and then iteratively build upon it.

This means we ditch anything optional or superfluous and focus on the bare essentials. We comment out or stub out the introductory sequence, outro, disk I/O (saving/loading high scores), high score name entry. Even the sound and input systems are ripped out almost entirely (CI2 provides a sound emulation layer that we can use, and we’ll do significant rework on the input system to support mouse and joypads anyway). There are a lot of casualties here, but we’ll swing around and fix them later on.

This is a crucial step because it can’t be broken down any further sub-steps, and there’s no indication of whether we’re on the right path or even how close we are to a successful compilation (well, except for the giant list of compiler errors that should hopefully get shorter and shorter as time goes by). We have to spend several hours ‘flying blind’ until we land on solid ground again.

I start up a new game, and I am immediately greeted by the following:

I spend some time very carefully fixing the bug in the CIU randomizer to make sure it still generates the same numbers (otherwise all the randomly-generated CIU missions would change!).

Completely by accident, as part of the debugging process, I notice there is something strange with the smoke/fire trails of asteroids: The first puff of smoke is always spawned at (0,0), which for CI1 is the top-left of the screen, regardless of where the asteroid is.

Incredulously, I load up the original game to check. And sure enough, there it is: 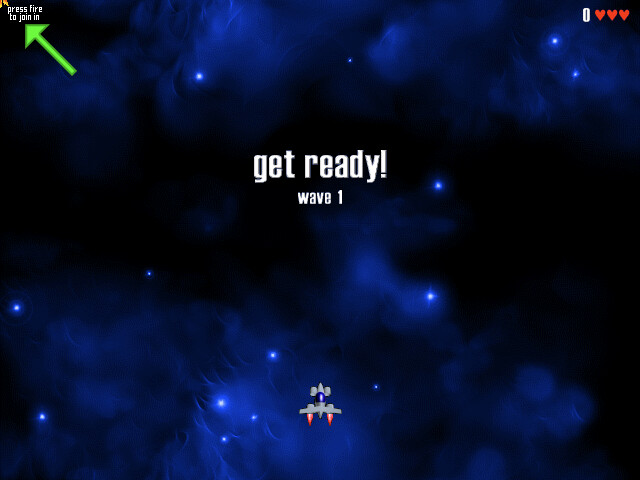 * I couldn’t capture the screenshot at the exact right time, so this is only a re-creation.

Show of hands – did anyone ever notice this? I certainly didn’t.

I check the code and it’s a case of “incomplete initialization”, very similar to what has been plaguing CIU (and previous episodes) for many years whenever you join a multi-player game while it’s paused.

The fix is very simple, but I mull over whether this should be actually fixed. I’m hesitant to change code behaviour, both as a matter of principle, and both out of fear I’ll miss some delicate dependency and inadvertently break something in the process.

I finally decide that yes, it will indeed will be fixed. So there you have it, (at least) one way in which CI1 is better than CIU! You’re welcome.

I also notice that some bullets are not facing the correct way: 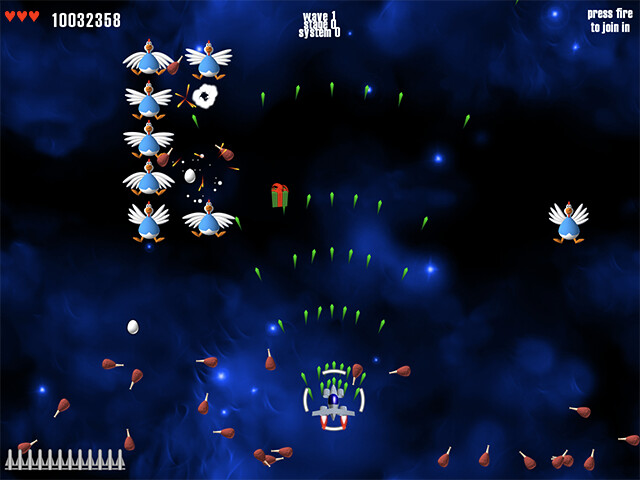 This turns out to be an incompatibility in CI1’s wrap(x,a,b) function, which wraps number x between a and b inclusive, and CIU’s corresponding function, where b is actually excluded from the range. I stupidly thought I’d just delete the old function and let the new one take over, because – hey, newer function, right? It’s got to be better!

Well, now I know better. Mental note: Do not touch the code unless absolutely necessary!

Having addressed the immediately apparent problems, I now decide the next thing I should tackle is adding more input methods to the game. I spend some time wiring up controls for keyboard(*), joypad and mouse. Thankfully I’m using a gutted CIU codebase, which has comprehensive controller support, so the process is relatively painless… 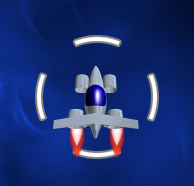 “But the stopping distance is simply the sum of the arithmetic series! There are formulas for that! Look it up! You even used that same formula to make spaceships decelerate properly at the end of a trip in CIU! It’s easy!”

Nope. Still had to calculate it iteratively

* As a side-effect, I discover CIU has been accidentally including keyboard controls for two players all this time .

High score entry was one of the first things to be commented out while trying to get the code to compile. I originally had no intention of putting it back in because it seemed to be slow, inelegant, and altogether a relic from another era. Not to mention it would be a hassle to get working, because it’s specialized code. It would be much easier for the name to be automatically filled-in from the player’s profile (as is done in CI2-CI5).

What eventually changed my mind is that there are two players that might need to enter different names. And also, of course, preserving the original as accurately as possible. 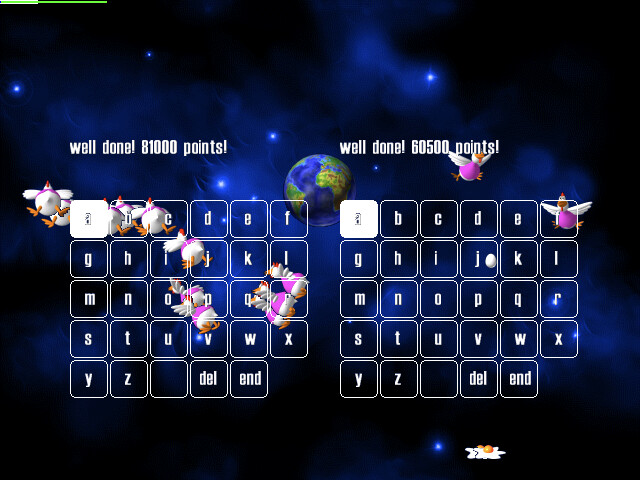 An interesting annoying thing about this screen is that the boxes containing the letters are not actually bitmaps, but they are drawn “on the spot” using GDI (ugh). There’s no good way to modernize this, so I’ll convert them to actual bitmaps.(*) For now I’ve just used some placeholder graphics – I’ll revisit this when it’s time to work on the GUI. 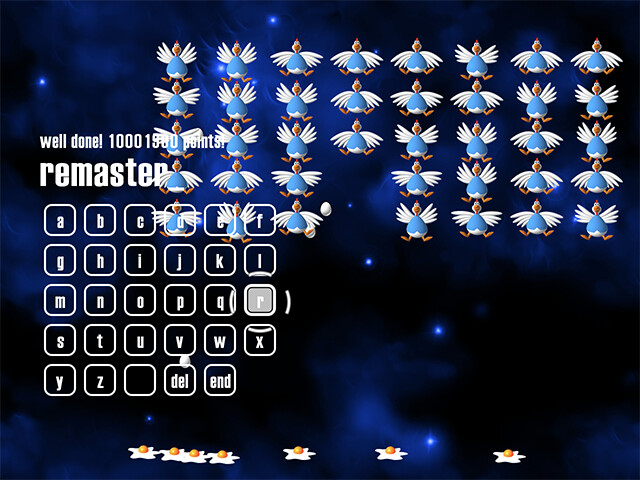 * This is much cleaner design, anyway, and much more consistent. I don’t know what I was thinking when I used GDI… I’ll chalk this one up to inexperience.

As of this writing, I’m uncertain whether this change will be reverted.

Yeah, that’s been thrown in the garbage. It didn’t work properly and it broke compatibility for very little benefit. I’ve decided to kick this particular can down the road to my future self when (if?) it’s time to re-master 1X games (such as Piggly or Loco). I’m going to hate myself then, I’m sure.

One can only wonder what InterAction Studios could accomplish while using other game engine.

Have you ever thought about a little side project like that? (I personally recommend waiting for Godot 4.0 since it will be a massive improvement and you don’t need to get yourself locked to Unity or Unreal ecosystems.)

But how? How can the game predict when you’ll stop using your mouse so it decelerate? Otherwise, it’ll spend time decelerating away from your mouse.

That reminds me of that atrocious mouse movement from CI2 versions before 2.60. If the mouse was moved very slowly, the spaceship would fly around.
It was really inconsistent and in my opinion, mouse players shouldn’t suffer from deceleration. Spaceship should stop immediately as soon as the ship stops moving.
I’d say this feature should be kept if you play via keyboard, I see more sense in that.

and as for the RNG error and calling your programmings and code bad.
You certainly didn’t know that much abt programming in 1999.
but now you’re keeping thousands of lines of codes and a server and running an online game.
So yeah you became a better programmer than the one you were 24 years ago .
You’re good iA you showed us all the best of chicken hunting games (and the authentic hero which all he wanted in life was a burger and some fries)
The point is you kept us together at the best games and gave us hope (while all that we did was crash and hack and destroy your games whenever it was possible) but now it’s time we give you hope. You’re a good programmer. Your the best iA no matter what happens you made ciu (presumably the only game I play now)
The last 4 years proved your success
We saw ciu

But no matter what you kept everything together

And now it’s time you continue that success.
With our support.
Your programming.
And some random people who expose bugs and crash servers (iIfireIi)
Together we’ll continue interAction studios legacy (Idk why didn’t I right that in the last 4 years recap but I’m not retyping all of this .I’m literally out of feelings to write lol)

Keep it on iA😁