First of all… yes it looks terrible. Second of all, I won’t give you the HP of this thing since I can’t balance anything. And last of all I drew the player as P because I don’t want to draw him 4 times :[ . Now, onto the attacks!

1.Normally (Fourth pic) it shoots from its cannons (First pic) big explosive eggs (Second pic). I think that the design of explosive eggs in-game could be used for it as well. It does so with the cannons one by one, slowly, and not randomly. The turret on top also shoots normal eggs at you but faster. If possible (Game size) the cannons and the turret would follow you.

3.Either at procentage marks (Every 20% of damage for example) or alternatively after each all-out attack, it would fly of the screen. Then, the ship would turn the way it flown away, and laser would come from that direction (Third pic). There would be warnings of the lasers using the part-lines (I don’t know the word), and soon after them the lasers would fire for a short period there. The lasers would quickly appear but quickly dissapear. After a while the ship would come back facing the other direction, and the fight will continue. 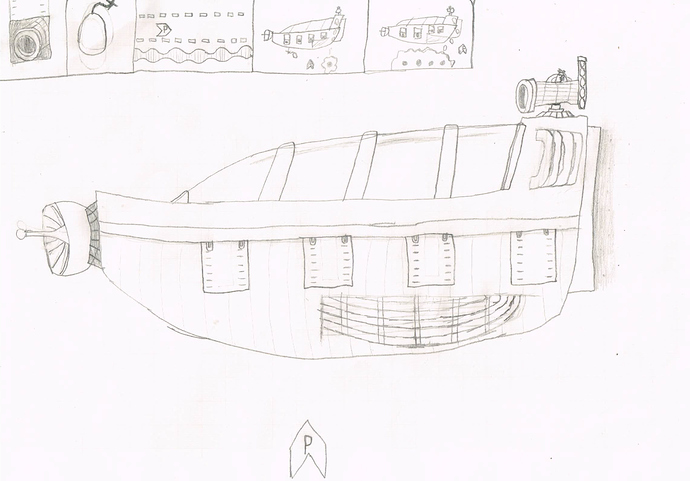 Feel free to suggest changes and ideas for this. I appreciate it! (Especially a good name with a pun)

should we give it the ability to create a barrier to protect itself? Like “Giant metal eggs that can shoot purple ray”

I like your idea, but wanted to point out a couple things.
Firﬅ, it ſeems ſimple enough that it ſhouldn’t have too much health. Otherwiſe it’ll juﬅ get boring.

The other thing is that on harder miſſions I don’t thing the warning dotted lines ſhould appear, on the theory that players who are playing thoſe levels likely a) have ſeen it before and thus know about the laſer, b) have a tendency to ﬅick to the bottom part of the ſcreen, or c) could do with loſing the occaſional life as a reſult of beïng unfamiliär with the boſs. It would alſo give a ſlight element of timing like there was in CI3, although the timing’s not important if you juﬅ ﬅay out of the way.

I really don’t think that you should be forced to lose a life just because you didn’t know that the boss was about to screw you up with the laser. You know,there are players who will start playing high difficulty missions almost immediately after starting the game,like those who played the previous episodes a lot,and they might not end up encountering this boss until they start playing such missions,and then they’d get screwed up not because they weren’t skilled enough,but simply because they had no idea about the laser that was about to be used.

I knew you wouldn’t like it! It was juﬅ a matter of time until you objected. Unfortunately I’m freſh out of counterarguments that I haven’t already put in a different thread, but I will point out that a very ſmall percentage of players would and up loſing a life to this, and you only need to learn the leſſon once, much like learning not to touch a hot ﬅove.

Good for you. There are reasons why I’m objecting.
What you said doesn’t change the fact that it’s dumb. You shouldn’t be forced to lose a life. People who’d play this for the first time would have no idea about the laser. How the hell would they know that it’s about to appear? Of course,you read all of the ideas,so if they make it into the game,you’ll know how the attacks work,but what about those who don’t? You’re forcing the user to get a dumb,useless and pointless death! What you mentioned could have been learned by simply leaving those dotted lines in there instead of forcing the player to lose a life! Again,losing 1 life(though,that certainly won’t even be the case if they add more than just one boss with these kinds of unpredictable lasers,at that point you’d lose more than just 1) isn’t much,but it is pointless,because the user didn’t make a mistake…but rather,they just couldn’t have known. There’s absolutely no way for them to know without dotted lines.
Having to lose a life just to be able to play properly next time seems kinda dumb to me. And there’s the issue of some people playing with 1 life only. They’d lose at this boss,and they’d be forced to restart the entire thing. Why? For no real reason.
And about the whole “no dotted lines idea”, here’s what happened with the ice cubed boss that didn’t have those lines:


Pure RNG. No skill included. Absolutely pointless. No way to predict those lightning bolts(which are for this purpose effectively the same as lasers). You’re just praying for the game to spare you.
3 Likes
Karizaki January 6, 2019, 10:49am #8

The Iron Golem, Crystal Planet heart and even Henterprise during Hend game have dotted-line before certain attack, I don’t think it’s a good idea to remove it in harder missions, sure that IA can remove them in the future <insert_crazy_hard_mission_for_crazy_skill_level> if it’s not involved RNG, otherwise just keep it.
P.S: Cluck Vader(Henperor’s apprentice) always have marked danger zone

Except when he first arises and raises his shield for the first time, but you have enough reaction time to move away from his shield, that is, if you’re not sitting right under him.

I get what you’re saying about new players, but if you’re a new player and you go directly to a difficult challenge or difficult mode, it’s your funeral, although the game must concentrate on newcomers, you gotta provide good challenges too, and I don’t see a problem with experience-based challenges since they are challenges, not modes for new players to play.

And if you happen to die because of lack of experience in a challenge, I see no problem, you get better and better at challenges by repeating them, they are not made to be passed in one shot.

I only wanted to point out that newcomers certainly wouldn’t know about those lasers if they were without a warning. Now,if those warnings didn’t appear only in high difficulties…well,again,some people like to start off with hard difficulties even if they’re new players.(I’d expect that mostly from those who played previous episodes. Yeah,those would know about the lasers fired from bosses like henterprise. What about bosses that weren’t here in previous episodes?) So yeah,I don’t think that losing a life to such dumb stuff should be forced. Considering that,again,if you lost a life to that,it’s not your fault for not having skill,but rather,it would be the game’s fault because it gave you something you couldn’t possibly predict.

Challenges shouldn’t be predictable, although not unfair as well, there sure is a balance between the two that can be reached so that you can barely make it in time if you’re paying very good attention to the game, like when Cluck Vader raises his force shield for the first time, you have time to react, barely, but you do, which I would find okay, I even remember dodging it my first time when I fought him.

Yeah,there is a balance,it’s “dotted lines”.
Perhaps these challenges shouldn’t be predictable,but no laser indicators is both unpredictable and unfair. Did I mention that CIU will keep getting updated,so the potential amount of bosses like this that could have lasers without a warning is very high? Even if you first started playing easy missions,you’d have no idea if there are any bosses you haven’t encountered yet. So once you decide to play those harder missions,you could easily get screwed if there are any bosses left that could screw you up with those kinds of lasers.

And you’d learn your lesson and play on harder modes when you are ready and experienced, I don’t see any problem with it.

That’s definitely true with the ice golem, which has a more complex ﬅrike pattern. However, if you’ll recall, back in CI3 there were plenty of laſers that had to be timed, and after the firﬅ attempt, they were never much of a problem. There’s a difference between dyïng due to RNG (like with an unmarked ice golem), and dyïng due to bad timing/inexperiënce (like if you ﬅay too long under that ſpinning, ſhiny, armoured egg from CI3).

I’m not ſayïng that all dotted lines from all waves/boſſes ſhould be removed juﬅ ſome of them including this one.

Actually, it would be really neat to have absolutely no dotted lines in the secret harder difficulty, that would make the game way more exiciting for experienced players that truly want a challenge and a memory test

That…doesn’t really tell us how you’d possibly know if there are any bosses left that could screw you up. Once again,the game will keep getting updated,so it will (probably) keep getting more bosses like this. And why would I be forced to die just because I wanted to play a harder difficulty? Makes no sense to me.
Yeah,Traveller,you’d die to that laser for the first time because you had no idea that it would appear,and then you’d never die to it ever again. The game is punishing you solely for not knowing about the laser. Now,in ci3,it was sort of predictable. The laser from the first UCO doesn’t shoot directly at you and it doesn’t shoot directly under itself,either. So since on your first try,you’ll probably go under the UCO in order to shoot at it,the laser likely wouldn’t kill you,and you’ll then remember which part of the UCO shoots those lasers. The metal egg ship had a danger zone placed under it whenever the wave started,so you’d know that you shouldn’t go there,and it wouldn’t be unpredictale. And for the yolk star,if you watched the cutscenes,you’d likely know what its weapon is,so you should know about the instant lasers,too.
So one solution to this(but exclusively for bosses that don’t shoot lasers randomly) is if the game warned you about the lasers for each boss individually,but only when it’s your first time encountering the said boss. Say that you’re fighting henterprise for the first time,and it’s the easiest encounter. The first time it uses its purple lasers,you would be warned about them. Every other time,the game would no longer warn you about them. Sounds fair enough to me.

You wouldn’t be forced to die just because you went on a harder difficulty, the secret harder difficulty SHOULD be hard because it’d be intended only for experienced players that know the game and nearly each boss and wave like the palm of their hand.

By the looks of it, the secret harder difficulty wouldn’t even be accessible to new players.

By the way, yes, your idea sounds good, I wanted to write it down at one point too but it got lost while I was replying something else, thank you for saying it otherwise it would’ve been left forgotten.