Are you satisfied with the reworks done so far?

Not sure how iA would rework Photon Swarm. Is he going to give them homing bullets like I sorta suggested before in discord? Or is he giving them the chance of supercharged bullets + extra bullets? If we’re lucky, both, though it’s no guarantee.

But I think giving Photon Swarm homing projectiles would greatly improve it’s use, though it would mean it can target unwanted objects, like UCO arms.

Lightning Fryer needs a chaining rework, it’s pretty weird when sometimes it chains backwards instead of forwards, maybe make it chains only forwards and the sides but it can chain and split deeper?
About Ion Blaster, it’s okay right now but it needs a damage buff
And Neutron Gun and Untensil Poker, they’re fine right now.

Well, overall the Lightning Fryer is ok, the ion blaster’s small bullets should be buffed indeed, and the neutron gun became my favorite weapon after its rework.

I feel Position Stream is a little OP with chicken crowds

Positron is nice, maybe it could use a teeny-tiny damage buff because splitting makes it already rather useful, but it’s garbage on boss battles.

A solution I propose is to make Positron split on the same hitbox, which would be determined by the hitbox’s size - if its radius is, for example, greater than 250, allow splitting on the same hitbox. That way Positron will become more useful against bosses.

As far as LF’s chaining (or rather bouncing) is concerned, I think that the mechanic overall works fine, but it should be made more lenient. Though just to what extent depends on the final base damage output.

As for the Plasma Rifle, I think the next iteration is gonna fall flat. It increases the already very high damage per hit to the point where it’s going to be absolutely overkill for most normal enemies. Really, it would only be viable for bosses, except it won’t be with just a 50% damage bonus. 16500 DPS is too low for a 5s overheat.
If it was +75%, then on

20 we’d have 19250 DPS. And while that’s more acceptable, it’s pretty much of no help in normal waves. Once again, only really viable for boss rushes. Which is why I previously suggested increasing the automatic rate of fire instead of base damage.

Aside from that, I think it’s kinda weird that IA insists that the Plasma Rifle should be automatic, but at the same time wants to keep manual fire seemingly equally as useful.

Ion Blaster, it always spread, so there’s almost no way to get 100% damage output from it. Current damage is still less, even though you already harassed your finger, than comparable counterparts, Neutron and Utensil which are better. I agree that 200 is too much, 175 may acceptable.

I think Lightning’s chain mechanic is weird, I don’t know how it works, but it’s weird. I’d rather make it chains more as it gets hotter. It would make the mechanic easier to understand and attract people to use auto-fire. I don’t like current damage progression, but I also don’t agree with Galbatorix introducing 3 bolts before max level, because an extra bolt will MAKE HUGE DIFFERENCE even though the damage is totally same. If it were me, I will keep current bolt’s count, and damage adjustment is enough.

As for Plasma, I don’t think auto-fire’s bonus damage is enough to appeal than never heating manual fire.

Positron, if I guessed correctly, its damage progression isn’t changed? Because in high difficulty, its damage is very underwhelming

but I also don’t agree with Galbatorix introducing 3 bolts before max level, because an extra bolt will MAKE HUGE DIFFERENCE even though the damage is totally same. If it were me, I will keep current bolt’s count, and damage adjustment is enough.

But it would only be a bigger difference if it was added later on. It’s 100 extra damage added early on, which is not that big of a deal, vs 250 damage added in the last power level. It would probably underperform again, too. And it would still not gain that big of a boost from bombers.

I think Lightning’s chain mechanic is weird, I don’t know how it works, but it’s weird.

Think about it more like a ricochet than a chain. It pretty much bounces off at an angle.

I don’t like current damage progression, but I also don’t agree with Galbatorix introducing 3 bolts before max level, because an extra bolt will MAKE HUGE DIFFERENCE even though the damage is totally same. If it were me, I will keep current bolt’s count, and damage adjustment is enough.

Galbatorix’s progression would work fine with galbatorix’s chaining system. But I agree it’s not a good idea to use it with this one.
I could try to come up with an adjustment to the current progression (since my progression with 4 bolts at

20 didn’t really gain much traction, and may not be viable due to issues with visibility).

but Neutrons overheat faster and don’t spread, so there’s still a reason for players to choose between the two weapons in missions.

The faster overheat of the Neutron is holding it back from truly supplanting Utensil Poker.
Right now, it actually has better DPS than Utensil Poker at

20, the two longest and most important power levels in the game. Still, I tend to use UP a lot more often due to its slower overheat.

Ion’s decent, I’d say. On some occasions like pushing Henterprise feathers, it outperforms even Utensil Poker and Riddler, it can hold it’s own against UP and Neutron when it comes to fighting these guys, the ordinary chickens:

They don’t hold up as well when it comes to fighting these guys tho:

And god forbid that you have to use ion against these guys: 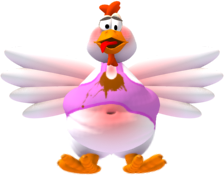 So yes, I agree with sufi, that Ion still has problems especially on elite missions, not only due to the increased health of enemies, but also due to the proliferation of Metal Suited Chickens, Cowards and Slobs, not to mention Chickenauts, Armored Eggships and Chick Gatling Guns.

Hmm… I tested the new lightning fryer and although I haven’t had much experience with the new mechanic, I will say that due to the intentional limitations of the chaining mechanic, it’s too unreliable in comparison to the reliability of manual fire which I prefer. If the time required to create a chain was reduced, it would be more viable. This is my opinion of course, feel free to disagree.


So this is what I had to say about the lightning fryer in version 38. Since v38, the chaining mechanic has been improved, having said that, it’s still not as reliable as manual spam fire, which offers better dps than automatic without chaining as well as much longer if not infinite time before overheating.

This is the real foil to the new lightning fryer. In fact, many of the remakes somehow make fighting them even more challenging. Along with the WBP, there should also be another program to balance chicken breeds.

I unfortunately have to kinda agree with you. The new Plasma Rifle exaggerates everything that was wrong with the previous version’s Plasma Rifle like being able to oneshot cowards and make them a total non threat and as a result breaking the weapon balance horribly, as well as making it even more nonviable in waves like Surfing the Wave, High-Speed Chase,etc.
Most of the time, players need weapons that have a good balance between projectiles spread, projectile count, projectile damage, overheating time and firerate all while having high DPS. If a weapon can’t guarantee a multi kill bonus or a clean sweep, it’ll inevitably be underused in comparison to weapons that can guarantee the player such bonuses.

This is what I have to say about Plasma Rifle right now. Please for the love of god, never use V43 Plasma on Supernova, only pain awaits you…

As for Positron, it’s now a lot better than it once was. Hell, I would even swap out Plasma to use it. The splitting is actually pretty okay. It helps to clear some easy waves much faster in Space Race, though it would need some accuracy. Otherwise, against a single giant thing, it’s kinda bleh. I’d use Plasma over it in that situation.

I agree with you. The splitting mechanic mas made positron stream a lot more viable in normal chicken waves, it’s also a lot better at pushing Henterprise Feathers, however, it’s performance against bosses is straight up bad.
Now you might be thinking, what about Bossa Nova, well it doesn’t perform as well as you would hope for since the debris of Bossa Nova orbit and thus move around the main boss itself, meaning that the splitting mechanic only has a few seconds to take effect before the debris has moved to such an angle where the splitting mechanic doesn’t work anymore. This cycle repeats for each debris getting targeted by the Positron Stream and is broken only when the Bossa Nova decides to use its debris and give you an opening.

So overall, while there has been definite improvements made on weapons, I’d say that there’s still more work to do in order to make certain weapons more viable.

Ion Blaster, eh, I’m fine with it, but indeed it needs a damage buff, like what Sufi said, weak bullet should do 175 dmg instead of 150.

As for Plasma, it seems pretty fine, except for it’s awkward fire rate, which made it hard to use. it will retain it’s old fire rate in v.44.

As for Positron, it is indeed cool, but its damage needs to be changed.

As for the Neutron, it became my favorite weapon since its rework.

As for the Forks, I felt a little sad when it was nerfed way lower than what i expected.

As for the chaining of lighting fryer, it’s kinda tricky and hard to use, i even see that it’s hard to use.

Lightning Fryer Chaining is kinda kinky and weird to the majority of players, including me. I agree with Celestial’s opinion
Plasma has weaken in v43 but will return as the ultimate weapon in v44
Neutron is better now. I’d like to consider changing weapons
Positron is good

RESULTS
It seems that most of us guys agree on several things - Ion Blaster needs a slight buff (adding 25 to the weak projectile damage is pretty plausible), Utensil & Neutron are

, Plasmer needs its old manual fire rate back (and we’re getting it soon) and Positron is overall a much nicer weapon, but maybe it could use a tiny buff as well.

However there are two distinct sides when it comes to Lightning Fryer’s chaining. Do you think we can reach a consensus on the matter?

In my opinion, chaining could be at the very least slightly faster (but not as fast as splitting, which is instant) because by the time LF chains to an enemy, I would have killed he primary target which would make chaining impossible.

@InterAction_studios Would you like to evaluate this thread as well?

Made a couple of tweaks:

About Plasma Rifle for a moment: I think increasing the damage ramp up to 75% would be nice, considering the rather fast overheat time.

I’d rather disagree, considering that Plasma is the most OP lock-on weapon
We are nerfing it down so that every weapon is equally the same in game style, also accounted for DPS and fire rate
If you like to ramp it up, use a Superweapon

Plasma is the most OP lock-on weapon

Plasma rifle is only good if you have healthy fingers. Its auto fire isn’t appealing enough.

Utensil poker and Neutron gun are pretty ok
I do kinda agree that Ion blaster needs a small buff
And chaining definitly needs to be reworked ,especially with the position stream,from what i’ve experienced,it’s split and chaining is very strange and i think that it 100% has to be changed.