I want to talk about Slob Chicken.

He’s similar to Chickenaut and Eggship, not only by hp amount, but also the fact that their attack are multi-directional. But, compared to these two, Slob has very rare chance to attack, unlike Chickenaut with its random interval between attacks but attacks very often and Eggship that shoots not that often as Chickenaut but has more certain interval, making these two way more predictable while Slob isn’t. And these two only has 3 projectiles while Slob has 12, this makes it has the MOST LETHAL surprise attack.

It’s not good when player feel being cheated on their death by some rng. “Okay, then you should stay away from it to avoid its attack.” It’s not that simple, because of rng of spawning (I’m not complaining about this in this post), you may be forced into close combat with it, and it may not only one of them! While you can kill it as fast as possible, you still don’t know when it will actually attack you.

My purpose of writing this post is to propose this change: Make it shoots its 12 directions attack only when it’s on the verge of death about when it only has 10% of hp left. Why? This allows player to make strategic decision, similar to against Coward Chickens, such as "Oh it’s Slob! I should not engage it too much until the other are cleared first! “Then it would never act as a threat unless you engage it!” Well, it’s true, aren’t Coward and Toxic the same? If you insist it should at least give some threat while it’s alive, then the second suggestion could be applied, Allows it to shoot waste just like every chicks. And the problem is done. A slightly tilted attack could work.

and not just make the game as an ordinary shmup. By the way, Slob Chicken will be the only chicken that has 2 different attacks, plus point!

Well, that works fine (maybe even a little better) when they’re just dotted in among the other chickens.

But what about this: 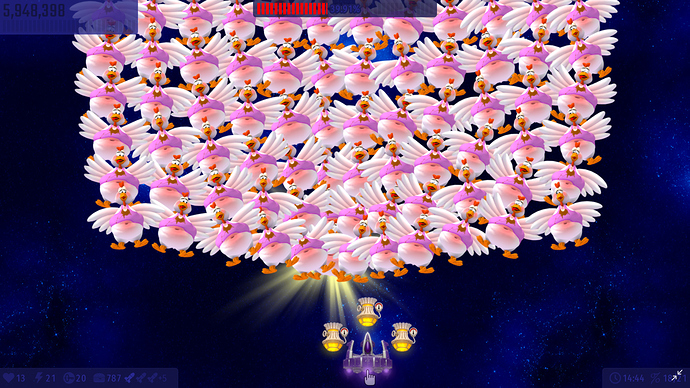 I know that I technically broke my promise of staying away from CIU for 3 weeks but I just couldn’t resist posting some epic waves, the first one shows up on the hard daily challenge of March 31st while the third one shows up in the weekly challenge. Bad times are upon us… [Epic Wave 8] And if that wasn’t crazy enough, I stumbled upon another epic wave: [Epic Wave 9] Gatling Roulette with UFO chickens, why? [Epic Wave 10]

(Just to be clear, I think that isolated waves of slobs are not actually that dangerous currently. But many people would disagree, and this change would definitely make them lethal.)

Okay, now I complain about the spawning rng, spamming tanky units (Chickenaut, Eggship, Slob, Gatling Gun) should not be allowed.

I think I agree with this statement. They are very fun when distributed amongst other types of chickens. In waves in which you have enough space to maouver and avoid attacks, tanky unit spam is not that bad too, but Chickenaut-only Omnidirectional Onslaught ain’t fun. You are 100 % done unless you have dmg amps or spam missiles like a madman.

In waves in which you have enough space to maouver and avoid attacks, tanky unit spam is not that bad too, but Chickenaut-only Omnidirectional Onslaught ain’t fun. You are 100 % done unless you have dmg amps or spam missiles like a madman.

It can do that anyway though.

Lol, I was planning an idea to rebalance slobs and you beat me to the punch.

Don’t worry, Everyone including me would like to hear your ideas too. This topic is about Slob Chicken after all.

Well, I’ve decided to prepone my idea about rebalancing the slobs as well as two other ideas wrapped into a single post.
Be sure to check it out and give your thoughts about it:

The First Salvo Of Ideas From Recruit #75 Ideas

I’ve now decided to adopt the tag of Recruit #75, everyone shall now address me as Recruit #75. (It’s really a joke but it would be pretty cool if I was identified as such, it’s totally optional) Anyways, I have come up with some ideas that you might like, Slobs: The new miniboss breed added in v29, they have since received a cult like following by many fellow recruits. However, their means of attack is highly flawed due to the great deal of RNG involved. You have a 1.6% chance of triggering…

What if slobs simply used their special attack only when they die? When alive, they would just shoot single waste like chicks. In such scenario it would be obvious for new players, how slobs work, while still being challenging and not RNG-dependant.

inhales and exhales These guys are so damn hard to beat when the game spams them on freaking Veteran. I’m that recruit who hates using superweapons so you know stuff is going down with this. I don’t know how many times I got confused about their firing times until I just gave up. I stand with Akemisora on this one and this is absolutely necessary.

Killing Slobs (and Cowards) with a few strong blows reduces the chance of retaliation vs. killing them with a lot of weak blows. One-hit kills (e.g. Absolver) are perfectly safe.

This is an intended mechanic. Has anyone noticed this? Just curious.

Huh, I’ve been wondering why they were shooting more frequently when I was using Forks compared to Plasma rifle.

This is an intended mechanic. Has anyone noticed this? Just curious.

Yes. I’ve been an Absolver main lately, so I’m well aware.
I love seeing slobs because they are like free food to me except that time I accidentally grabbed a Boron and discovered just how incredibly weak it is atm

What if slobs simply used their special attack only when they die? When alive, they would just shoot single waste like chicks. In such scenario it would be obvious for new players, how slobs work, while still being challenging and not RNG-dependant.

When I first encountered slobs this is actually how I thought they work - I’d be open to this, though I’m also not convinced it’s the best solution.

I agree with EmeraldPlay, even if every weapon would have been reworked, then high damaging weapon would be superior no matter what.

Then every weapon would have to be roughly the same damage.

Riddler will deal the same damage as Absolver Beam

On charts below you can see how WBP power progression looks like in comparison with what we currently have.

Look at the graphs.