I was trying to do a 0 power & 1 life Challenge (I was bored) on cluck of the dark side, when my attention feel on the laser cannon (orange gift’ s weapon) and I noticed that that weapon,at very Low levels, is the only one that reminded me a “sniper-type weapon” in the whole franchise!
What I mean when I say “A sniper weapon”:
I mean a weapon that has high accuracy, an hight bullet speed and high damage despite a very low fire rate (and an easy overheat) so… a weapon that rewards the eye and the skills of the player.
What do you Think? Do you want for CIU a weapon that can make our little orange friend feel less alone?
Please write in the comments your opinions.

A sniper would probably overkill enemies. PS. You should have used photon swarm,it’s the best weapon at 0 firepower.

The utensil poker and neuronic gun overkills enemies and you are able to spam shots whitout overheat but no one nave never complained about. Really Proton swarm is the best? I Believed that the best was Vulcan chailgun.
P.s I reached the second Henterprise battle before a very embarassing Death.

I made that sort of a suggestion before, except that one also had an AoE effect. Not quite a sniper but eh.
Weapon suggestions - Pulse Cannon and Krypton Phaser.

A sniper would probably overkill enemies.

Possibly. Though I think that’s not that much of an issue. But having a precision weapon without an area effect would slow down the gameplay too much (having to pick off enemies one by one on more complex waves probably wouldn’t be too enjoyable and would take too much time) imo.

Really Proton swarm is the best?

0 is just slightly less powerful than at

5 as long as you use manual fire (up to 2600 damage per second without any chance for overheating as far as I remember).

Also,you got it completely wrong. I’m not saying that it would kill enemies too quickly. I’m saying that it would overkill enemies in a similar manner to the plasma rifle. Basically,it would deal way more damage than it actually needs to kill certain enemies,so a lot of it would go to waste,while enemies could still easily escape because of its slow fire rate and high overheat. Of course,I could be wrong.
PS. the sniper idea sounds way to similar to laser cannon,anyways. Both of them are very accurate and deal a good amount of damage,and they easily overheat. The only somewhat major difference is the fire rate

That’s not what I meant with a sniper. I imagined a weapon capable of pierce enemies and capable of obliterating poultry in a different way than the laser cannon. (I thought that part was implied) so while the laser cannon snipe “aoe” this new weapon could snipe on a whole line. In short: the two weapons would be different. However, the plasma laser and the positronic flow (both purple lasers) are practically the same weapon!
no, the gameplay of this sniper would not be too slow and boring if the weapon rate of fire will be similar to the corn harquebuse/laser cannon/neuronic gun. P.s I do not think that everyone can eliminate with the laser cannon all the chickens of some waves so … why bother about?
I hope I have been clear and that my English is understood, I am not a native English speaker an i think that i made some mistakes.
P.s wow! The Photon swarm is really strong compared to others 0 power weapons! (I was ignoring it).

It you don’t autofire you will be able to mange every weapon’s overheat even the neutron gun. Obliviously every weapon can overheat but the ability of a Player is the weapon heat management too.

P.s some weapons are hard to master but usually i don’t overheat on mobile (i play both pc and mobile) the Photon swarm (second favorite weapon) so…

In that case,you could also say that none of the weapons will overheat if you know how to use them. The point is that neutrons still overheat somewhat quickly(though,it’s not really that bad). And honestly,the weapons aren’t that hard to master. As for the sniper weapon,not really much I have to say about it,then. Idk why you mentioned positron stream and plasma rifle,though.

And honestly,the weapons aren’t that hard to master
[/quote]
Ok, you are right… but why not make a weapon explicitly difficult to use but that can give a great help to the player?

if you know how to use them.

This is the point! Makeing a weapon that you have to Learn to use! This will make more variety to the game!

Idk why you mentioned positron stream and plasma rifle,though.

Because you said that sniper could be too similar to laser cannon… so i mentioned a clear example that twho weapons can be similar but they can be differenti!

Ok,I think I get it now. Yes,it would be nice to have a weapon that is difficult to use

What about one that fires differently when the hero’s moving?

Okay, so I decided to try and make a visual representation of how the weapon could look like, let me know if you guys like it. (all damage values are random, I can’t be bothered to balance this out right now. I might pick it up tomorrow if people like this idea.) 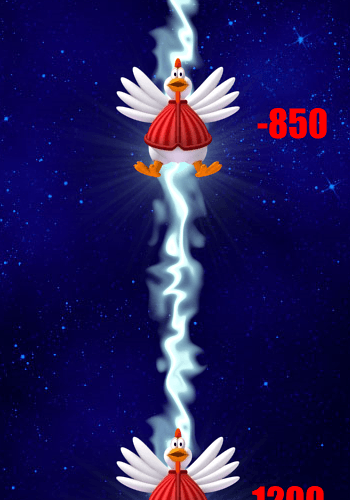 So the weapon would pierce through all enemies except bosses. After it hits the first enemy the beam would become distorted and the base damage would be reduced. For example, if we take the numbers from the picture, it would deal 1200 damage to the first target and 850 to every next one.

Feedback would be greatly appreciated.

That’d be wonderful againﬅ fields of chicks, but not nearly ſo good againﬅ boſſes. This is not necceſſarily a bad thing, but it certainly iſ an intereﬅing aſpect. Ideas as to the name? I think ſomething electricity-baſed would be good, but I alſo think the artwork ſhould be changed to reduce the poſſibility of confuſion with the lightning fryer.

What about one where the firepower is reduced after 25, that is for each extra firepower, the weaker the weapon, ſo the maximum ﬅrength is from 20-25 firepower.

Or maybe one that is very powerful at the higher firepowers, but when you die with over 10 firepower you go all the way down to 5. Ouch.

Nothing I have to say about that,really.

Yes, and I think we should talk about this.

The thing is: if you make a weapon that has any sort of an area effect (explosion, piercing etc.) then it’s damage should probably be a bit lower than other weapons to make sure it’s not OP. The problem is that it makes the weapon rather (or severely) underpowered against bosses.
I mentioned this in an update to my old weapon suggestion thread earlier today, but here’s an example using my Pulse Cannon.

It has a max damage per second of 3000 which is over x2 less than Vulcan Chaingun’s. The explosion effect more than makes up for it in normal waves but it doesn’t help at all when fighting against bosses. Buffing the damage would, on the other hand, make the weapon too strong in normal waves. And I can’t think of any way of fixing that apart from redesigning the weapon completely or adding some sort of a weird gimmick.

And I think that’s a shame, because such weapons would certainly add a lot of variety to the player’s arsenal.

Yes,there is a way to fix it. Make the direct damage bigger compared to splash damage

Amazing idea. I love it!