Hello everyone and welcome to this new topic, I hope it impresses you.

Since we are getting close to the official release of CIU, let’s have a good ending on the early access period. Here I have some ideas about a new weapon named Gamma Tornado.

Overall Mechanics of the Weapon
It is a rapid-firing weapon which shoots bursts of gamma rays in a medium-width angle which pierce through enemies. It’s very similar to Riddler but with piercing capability. 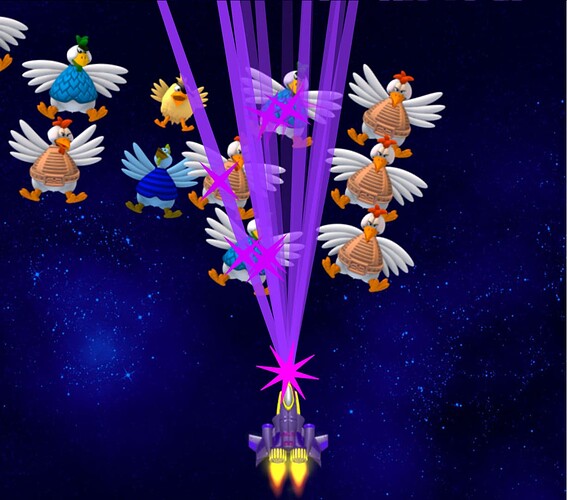 Idea Origin
I think you agree about that we feel a gap about having some object piercing weapons in the game, which could make the game very amusing and fun. But now we have only one weapon with this kind of ability which is a charge-up weapon. So we need a rapid-firing type to complete the collection, and I think Gamma Tornado will do the work, especially when we consider that it supports Overdrive and Accumulator!

The damage type of this weapon is SPECIAL (according to the excel file of weapons). I’d prefer to say it’s a WAVE type.

This weapon’s shots have fixed amount of damage (like Riddler pellets). This amount is = 375 units per shot (or per ray I say).

The gamma bursts aren’t concentrated and they travel in a wide angle which equals to the width of Riddler pellets in power level 5. This width is fixed from power 0 to MAX.

As I said, this weapon is fired rapidly and supports Overdrive and Accumulator.

About the appearance, each gamma ray is as thick as level 3 shot of Laser Cannon (not its level 4 which is full charged) and its color is light violet. It may differ based on what IA prefers. The rays appear suddenly upon firing and then fade away as slowly as level 4 shot of Laser Cannon.

There are star-like feedbacks and blinks for waves upon impact, just like the Absolver.

And the special thing about this weapon is that it has no recoil, which means your spaceship does’nt go back when firing and remains still (just like the images you see below). This feels exactly like when you fire some waves and rays instead of kinetic pellets.

Now about the weapon parameters in each power level, but first, see this legend…
Rel: Reload time (or firing interval based of that weapon data excel file), in seconds (I mean the time between ray bursts.)
Oht: Overheat time, in seconds
Sps: Shots (or rays) per second (I mean the number of individual rays fired in each second, not the number of bursts.)
Dps: Damage per second

Please note that the faster firing rate of gamma bursts makes the appearance of this weapon into a real tornado! Especially when you face a lot of enemies…

The piercing ability of Gamma Tornado makes it so special that we need some balances in the parameters in order to prevent making it overpowered. So the rate of power increasing is slower than Riddler and its Dps is smaller than most of the weapons, it has a somewhat wide area of shots and it generates heat a little fast.
But if you face those chickens in numbers and use this ability and also the overdrive possibility in your advantage, you’ll barbecue those chicks with major cancer so hard that you would put their corpses into garbage instead of using them as food !!!

Gamma Tornado’s In-Game Description
Here i suggest these sentences to introduce the weapon:

An experimental weapon made by some crazy scientists who have studied many years on singularities and fast particles. This boy uses antimatter as its ammo, just a small touch between matter and antimatter and nothing else is needed to produce extremely huge amount of pure energy with some brutal gamma rays. These rays can pierce through any substances but they don’t care about their direction very much. At first you may have challenges using this toy to your aid but after some really little time you’ll be satisfied to trust only this boy when facing tons of chickens waiting to be barbecued in a scientific manner.

Keep the ammo in electricity field and use at most 14 nanograms in each shot, unless you want to make a nice roasted food out of yourself for carnivorous chickens.

See? It looks nice and good for the game’s environment!!

Thank you for your investment of time reading this article! I hope this little gift impresses and satisfies IA.

Unique but what’s the price for it and should it able to spread radiation to nearby enemies if one of them get hit?

omg ci72 riddler?! wow riddler was absolved
i wouldnt mind seeing this in-game but its pretty much just these two combined
would also be completely superior to uncharged absolver

In the first step it’s not really important to suggest and discuss about the price unless IA is interested to design this weapon for sure.

This one does’nt have radiation spread upon hit to damage nearby enemies.

There are many differences between Riddler and G Tornado,
for example, GT bursts have at most 3 rays each but Riddler has much more pellets on each burst.
Add to this, overheat time, spreading angle of shots, the recoil, and the appearance. It may be designed in any other color, yellow, orange, pink, white, gray, … .

I just made the comparison between GT and riddler just because of the damage rate that must be balanced.

The most important difference between GT and Absolver is that GT can’t destroy enemy projectiles.

but they don’t care about their direction very much

You can say “However, due to the nature of this weapon and how it behaves, this is not an accuracy weapon”

but they don’t care about their direction very much

You can say “However, due to the nature of this weapon and how it behaves, this is not an accuracy weapon”

Yes, I agree. The overall decision is made by IA in writing the description.
I wrote that text just for some sense of humor, which the game has some gleams on it.

I made these gifs with Microsoft PowerPoint.
You put some pictures and shapes in the page, give them some animations, then in the “Save as” window you choose “.gif” extention.
What you see in the first post is the result of this process.

That would be crazier, if this weapon had something like very low accuracy, but the more heat it gets, the more accurate shots are…

but the more heat it gets, the more accurate shots are…

Now you wanna add Vulcan in this weapon?

use at most 14 nanograms in each shot, unless you want to make a nice roasted food out of yourself for carnivorous chickens.

use at most 14 nanograms in each shot, unless you want to make a nice roasted food out of yourself for carnivorous chickens.

For a semi OP weapon, maybe overheat killing you would be fun /sarcasm

It seems reasonable and fair, images are bit choppy with those rectangle beam shapes but idea is good imo. Lack of recoil + various spreads/sizes is nice touch. I like that it’s an absolver compatible with special charger things (overdrive/accumulator, I forgot and too lazy to read names).

Also, it’s just a suggestion, so don’t get worked up over the “what if” scenario…

That would be crazier, if this weapon had something like very low accuracy, but the more heat it gets, the more accurate shots are…

That’s a nice idea, but not about VERY low accuracy at first (it makes the weapon too weak at first and hard to use for optimal performance), just a little wider angle than those gifs, then increasing accuracy to a good extent as heat builds up.

For a semi OP weapon, maybe overheat killing you would be fun /sarcasm

Interesting idea about self damage and kill by overheating.

I think it’s better to mention it as a new idea topic with the title of Game Rules, for example self kill by overheating in each weapon.

Something like what you see in a game named Hades!