Uh Oh! This could be the start of 'Slangification' of CIU 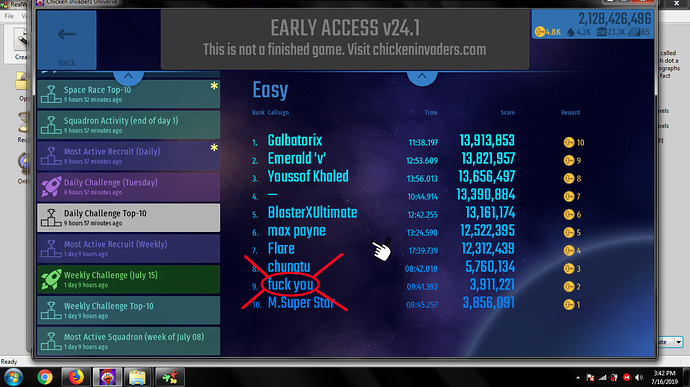 unnamed.jpg1366×768 419 KB
This is no big deal on most pg-13 or above internet sites but this is concerning because the Chicken Invaders Series is supposed to be kid friendly. There are a bunch of kids playing it What will children think of the game, especially when there is no warning for internet swear words. I really just feel like this needs attention.
2 Likes
GuestUniverse July 16, 2019, 10:13am #2

This isn’t the first time this happened.

I will again suggest a on/off censor option for bad words, because out right banning certain phrases can lead to complications. Sometimes you write something normal and the system could flag that as inappropiate because there’s something in the middle or something. If it will be on/off, then the worry for over-censor will be smaller.

That’s fine for me. But there should be something done to counter swearing. I can’t imagine new kids seeing this guy’s username, especially in front of their parents who thought it was an innocent game.

But this censor option would hide this and similar words. Maybe parents will be needed to be notified of this option.

there is also a person which has THAT word…

That’s the first mention of galbatorix supreme’s easy top 1 on the forum. Now I am on the road to the endless fame and infinite power!!!

Ok, seriously now. On/off censorship for bad words that Davoid proposed is probably the best way to get rid of this problem. Many games use similar chat filters, that can be turned off if player wants to do so. In most cases it works pretty well.

This is a known and complex issue (see Not allowing some names ). It must be tackled by a combination of blacklisting and user reporting.

The user in question has been warned, and the callsign has been reset. Basic word blacklisting has also been implemented. User reporting will have to wait for now.

Someone also has a no-no word as their callsign, which starts with ‘n’.

Shouldn’t I (For bringing up the mechanic) or atleast @PenguinBOI get the medal for being the first to mention it? You linked to his topic…
Also I feel like a bad username has been mentioned before (Especially with isp claiming so too) on the forums, so someone could have been the original person even earlier.
EDIT: I did actually mention this early too.

What you don't want in the final game? Ideas

Everyone here is suggesting many ideas, some better, some less, but I never saw anybody posting something that they wouldn’t like to be in the game, and for a good reason- an idea of what you do want in the he game can help more and be more supportive than an idea of what shouldn’t be in the game. That said, ideas of what shouldn’t be in the game are still important, and for this reason I made this topic, so that everyone could write what they wouldn’t like in the final game.

What you don't want in the final game?

Honestly just having a manually activated consorship could be a good tool for parents, since I bet there are a few kids playing CI. That being said, the game still just shouldnt turn into club penguin : P

EDIT EDIT: It could be argued that @PeriCore was the very first to mention chat moderation, though he was against it. So first or opposite-first?

In my opinion, there should be a button for reporting players for bad callsigns when you click on players

Yeah, I think I should get a medal too.

Ps: my idea was censoring these names. You can found it by digging up the forum.

I really don’t deserve the medal. I only gave proof about offensive usernames. Maybe give the medal to Davoid for bringing up the solution.

@Davoid: I only see your idea about manually activated censorship (which hasn’t been implemented yet).
@isp: “N” callsign has been warned.

I didn’t get the medal. My username is ChickenSlayer

You will earn the medal after the next update got launched, just like every other player.