Or just reduce the points they give, about only 10,000 points only

I think that things will scare Absolve Beam

It looks like the player’s fighting against 2 Jagdtiger, instead of Panzer IV.

Name this as Panzer Fowl.

You sure have done your research on this.

You sure have done your research on this.
Great idea. +1

I am very well aware that I can show appreciation by only clicking the like button.
But I also wanted to state it myself with words, as well as show my respect for the great idea by stating that he has done some research on the idea.
Please stop slapping anyone who says “Great Idea” on the face with a “use the like button”. This should apply to everyone, not just you.
Some people simply want to show their appreciation by more than a mere like.

I could also state some factual reasons as to why people might as well also express their appreciation by more than likes. For example, the more positive replies a topic gets, the more appreciated the idea is shown to be in a way that states that the community likes the idea.

Another example is: There is a badge for liking 50 things 3 days in a row (if I recall correctly). A like from somoene could as well be just that, not an appreciation for the idea, but simply grinding for a badge.

It’s not like we have a limited number or replies or that our possitive replies hurt people. In fact, if you had an idea and saw people say that it’s good, I’m guessing it could also put a little smile on your face. Maybe even bigger, depending on who says it.

I hope you get my points.
Apologizes if I sounded aggressive.

If barriers become a concern of points grinding, then apply the suggested idea to remove barrier’s point. Because it’s not barrier invaders. (Someone said that, too lazy to search)

Sorry for responding 5 days late but well, I’m here now.
While the barrier is intended to represent the hull mounted machine guns found in most tanks, the real function of its existence is to spice up the wave and make it more challenging

Also, while many tanks have turret mounted machine guns as well, implementing them into a wave requires much more effort than is necessary, there would need to be a gun barrier in the inner barrier ring surrounding the tank and such a ring would have to rotate in sync with the Gatling gun, it might be possible to code such a thing, but I’m not really sure if it’s worth the effort.

Sorry about that, there’s no need to be realistic on your suggestion. It’s just me being triggered. The concept of a tank is already there.

There’s tanks out there that only has MG, no turret, etc.

Fun fact: Did you know that in the entire Chicken Invaders series, there isn’t a single enemy(*) that fires in the actual direction that it’s facing? Neither did I, until I tried to implement this.

(*) Chick Gatling Gun swivels, but doesn’t actually face you (much like a tank turrent)

When coward released it shot where it’s facing tho

Hmm. In its current form it’s targetting the player (approximately), which has nothing to do with which way it’s facing.

You’re right in the sense that in some previous version it did indeed fire precisely in the opposite direction from where it was facing. But no longer. 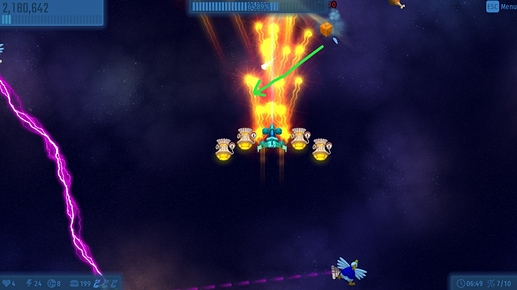 I’m not sure what that’s supposed to prove, especially considering that the coward has already died. 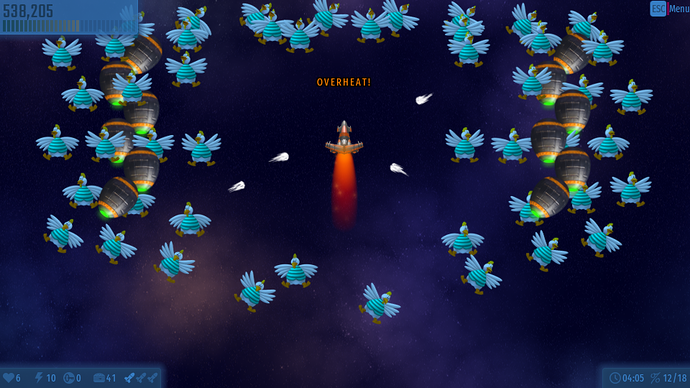 Cowards are perfectly capable of shooting upwards even though they remain upright, so they’re clearly not restricted to firing in the same direction they’re facing.

I have one question:If this wave is going to be added,what is it’s name?

First of all, you need to add “[/quote]” at the end.
Second, it will be called Panzer Strike. You can even check Changelog.