Recruit #75 here…
The Henpire is training its chickens for a new formation, a formation simply called tanks, due to their resemblance to 20th and 21st century tanks. They’ve further increased the production of chick mounted Gatling guns and egg barriers, from what I’ve seen, they’ll be a formidable challenge for most recruits, so everyone, keep those damage amps ready, and may the Forks be with you all!

Anyways, so the way this wave works is that the screen is zoomed out to 150%. The chickens will come in this formation: 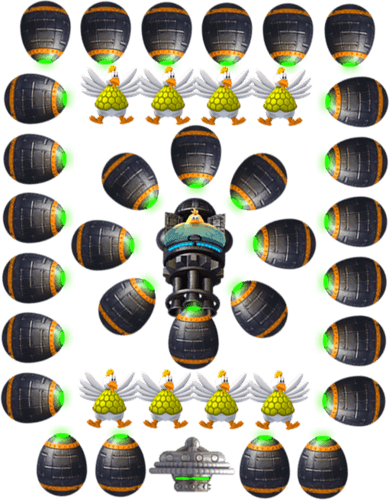 chickenrear4 copy 2510×655 638 KB
As you can see, the gatling gun represents the turret, while the Lv4. barrier on the front of the tank represents the hull mounted machine gun found in most tanks such as this one: 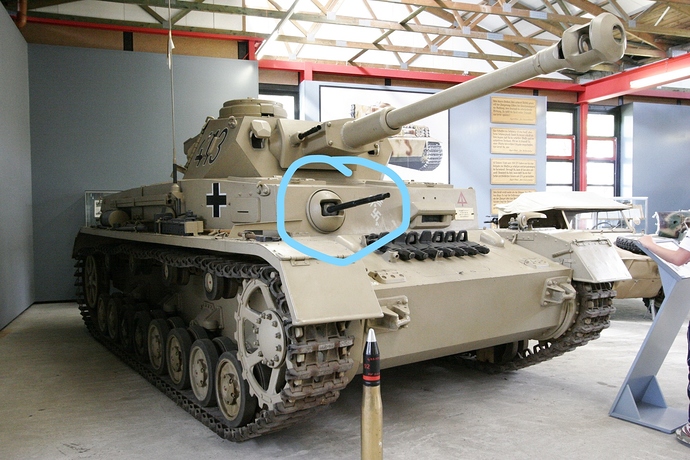 SdKfz161-1-1_LI1752×1168 693 KB
They can come from any direction so a danger zone similar to the one in Terminator Chickens should be applied. Whenever one formation is fully destroyed, another one replaces it like in Caged Animals. Their movement pattern is similar to the cages in Caged Animals, except the ‘tanks’ are slower so that players don’t get straight up annihilated.
There can only be two ‘tanks’ onscreen at any point and there are 4 ‘tanks’ in total.
This is an example of what it could look like in game: 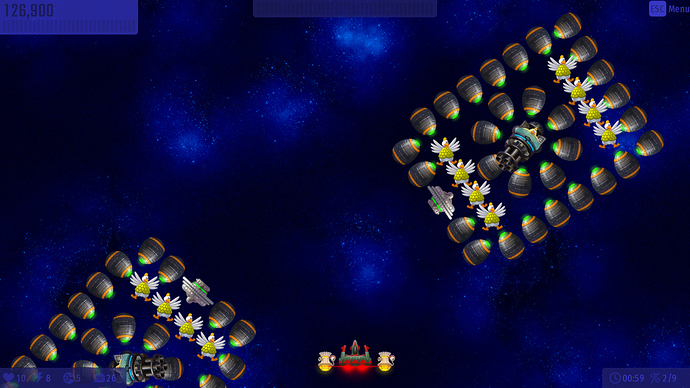 I like to see the Soviet tanks in CIU, it looks fun and difficult

We can just make the barriers indestructible, in that case.

Its more funny when you remember the Early Access 26

Well, this wave is related to tanks, and tanks are mostly made with hard steel, we can make these barrier tougher, but not too tough. Let’s say about 2x harder as a normal egg barrier would

Like the egg arriero of the wave “Do Not Cross”

It looks like a strong version of “Caged Animals”, it’s cool, I hope it’ll be added with it depending on difficulty.

Eh, it’ll take a lot of time to destroy them

it’ll take a lot of time to destroy them

My Bad, sorry about that

Why would you want the protective shell of a tank dissapear?

Or just reduce the points they give, about only 10,000 points only

I think that things will scare Absolve Beam

It looks like the player’s fighting against 2 Jagdtiger, instead of Panzer IV.

Name this as Panzer Fowl.

You sure have done your research on this.

You sure have done your research on this.
Great idea. +1

I am very well aware that I can show appreciation by only clicking the like button.
But I also wanted to state it myself with words, as well as show my respect for the great idea by stating that he has done some research on the idea.
Please stop slapping anyone who says “Great Idea” on the face with a “use the like button”. This should apply to everyone, not just you.
Some people simply want to show their appreciation by more than a mere like.

I could also state some factual reasons as to why people might as well also express their appreciation by more than likes. For example, the more positive replies a topic gets, the more appreciated the idea is shown to be in a way that states that the community likes the idea.

Another example is: There is a badge for liking 50 things 3 days in a row (if I recall correctly). A like from somoene could as well be just that, not an appreciation for the idea, but simply grinding for a badge.

It’s not like we have a limited number or replies or that our possitive replies hurt people. In fact, if you had an idea and saw people say that it’s good, I’m guessing it could also put a little smile on your face. Maybe even bigger, depending on who says it.

I hope you get my points.
Apologizes if I sounded aggressive.