Hello there! Here are some ideas that I think could be possible to make in the game.

The first two ideas are neat. The last one is,too,but I don’t like the fact that it’s shot in random directions. And how much ammo does this satellite have?

oh,right,I forgot about it. But how many enemies can it hit before it disappears? Or does it stay on the screen for a set amount of time?

Oh yeah forgot to mention. It would stay on screen for like 15 seconds. Also do you think that “better” glow and enemies in background are possible to make on this engine?

The better glow probably is,and the enemies in the background probably are,too. There were background asteroids in ci2,so I think it’s possible. I just hope that they won’t cover stuff like your ship(the fake asteroids did that)

Well I think they did it wrong that time. The background enemies shouldn’t cover player or anything. That’s why they are in the background.

yeah. Well,I believe that it should be possible

Regarding the satellite, if you don’t consider absolute randomness as a must, then here’s a suggestion:
The randomness could be somewhat negated by giving a visible indication (a short laser or something) of where the next shot will go. The direction will still be random but the player will know what it is.

That, of course, would mean that the player could simply position themselves in a way so they could hit the chickens directly. What if the rings didn’t become “active” (didn’t deal damage) until they hit a wall? That way the player wouldn’t aim straight at the enemies and would instead be required to utilize the weapon’s property of bouncing off of the walls (and probably require a little bit more skill to use).

And yes, the glow and enemies in the background are most likely possible.

Yeah I like that idea. It would be better for rings to activate only when they first hit the wall.

Or maybe,instead of going in random directions,it could go in whichever direction you’re going?

But what if you must stay still during boss time for example?

Then it’ll go in whichever direction you went last

I’ve made another screenshot to show how the new better glow would work with different weapons. 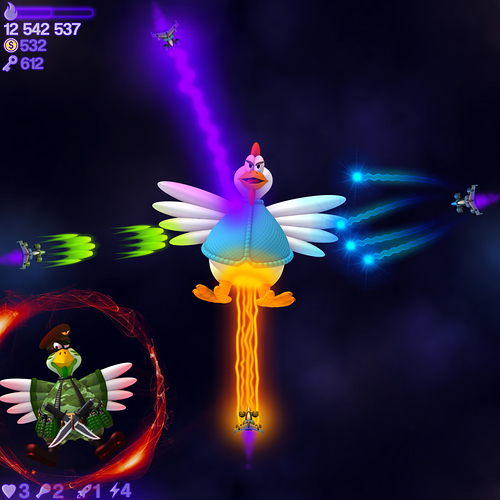 That would likely be hard to add, as the chickens and other things are sprites.

I always wanted to ask, why don’t we never see chickens turning on the side or on the back? We never saw other poses of chickens and bosses.

Yea, id like to see cutscene how The Egg Cannon shoots the egg vs Henterprise, and Henterprise destroy it whit his big laser, but i dont think it will be real someday its on my brain.

I would like to see them move in 3d like Egg cannon only moves to the left. Can’t they nake objects move for example in the distance or actually turn so we cn see all sides of them. I explained that pretty badly bc of my terrible english, hopefully you understand what I mean.

Yes i understand you