Question about going off-topic ["Reply as a Linked Topic"]

First: It’s not about off-topic category.

Let’s say that there’s a topic about certain gamemode. This gamemode is about survival in space and some of the things that are different in it is that you have to collect fuel to maintain the flight and also that you need to click mouse button every time you want to move somewhere. Now this can make a situation where:

So now the questions. What is considered off-topic? I’m talking about just replying in the same topic. Is it person C because he wasn’t writing on the topic of main post or is it person D since he also didn’t write about the idea in main post?
It may seem stupid, but I’m just asking it since there’s written in the FAQ: “Rather than taking an existing topic in a radically different direction, use Reply as a Linked Topic.” and I just learned where this “reply as linked topic” is located, but I think no one ever used it here and I would like to hear your opinion on if it should be used at all. I mean it does create a new topic so it could get spammy if people start using it everywhere. 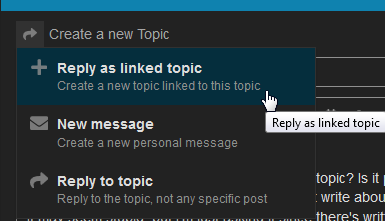 Maybe in order to answer your question we need to define what a “topic” is. Is it something specific, like exactly what OP is talking about, or does it rather boil down to the main idea?

For example, in a thread called “Making Custom Quips”, OP probably me talks about adding your own quips at the cost of keys, but not too many keys.
Later someone replies to the topic with “Could there also be predefined quips available for purchase, maybe categories for them as well?” And the question here is - is this on-topic or off-topic?

In my opinion it’s considered on-topic so long as the thread follows the main idea of the first post - quips, and in our case any form of quip customization.

An example for off-topic posts would be such posts that have literally nothing to do with the first one.

Person A: Hey so I had this idea about bombers - lalalalala. What do you think?
Person B: like, oh my god Karen, check out this tweet I just found, like, that’s totally wicked! Ouh Em Gee!1

But those are my views on it.

I tried creating a sample linked topic. You can see the result above. It seems to be only linking against the last post (i.e., @Sufi 's post) and not the original topic. I tried it twice to make sure I had the original post selected, but it didn’t change anything.

I’d say, it wouldn’t hurt to use it, but you can equally just create a new independent post and start it off by saying something like “Inspired by [topic …] I was thinking that […]”

It don’t work on mobile