This update wasn’t supposed to come until well after the initial early access release, but since your creative ideas have already started flooding in, it’s better to explain how the process will work now.

Although there are some areas that we’re most interested in (enemies, weapons, powerups, spaceships), you can submit your ideas on absolutely anything you like (even changing the font color!).

We promise that we’ll look at each of your ideas carefully. However, there is no guarantee that we’ll put them in the game. There are many considerations (some creative and some technical), conflicting requirements, and limitations when evaluating your ideas, and as much as we’d like to, it’s impossible for us to use every idea. Sadly some great ideas will be left unimplemented.

Here are some things to keep in mind when submitting your ideas:

Not all ideas will make it into the game. Submitting an idea does not create an obligation to implement it in the game.

Even if your idea makes it into the game, it might be significantly modified to satisfy one or more of the above constraints. Provided that the end result was inspired by your idea, however, you’ll still receive credit for it.

If we use one of your ideas in the game, we’ll include your name in the credits (unless you prefer to be anonymous), give you a bunch of in-game keys as a reward, as well as a special in-game “contributor” medal (one for each idea). You understand and agree that this will be the full extent of your involvement in the game. In particular, submitting ideas does not create a business relationship between InterAction studios and yourself, the intellectual property and copyright of the game remain the exclusive property of InterAction studios, and you will have no further claim to the use of your ideas other than that stated above.

By submitting your ideas to us, you confirm that you understand and agree to be bound by these rules.

19 Likes
Plan Update #01
A way to indicate that you were a beta tester
Early Access version 56
Massively multiplayer online (MMO) boss battle
New boss
Is chicken invader universe the last one in the series?
New idea for planet and level
xXmlgDiegoXx August 18, 2018, 8:31pm #2

In CIU can there be a weapon that shoots projectiles from other weapons? explaining it better than when obtaining the weapon shoot any projectile of any other weapon with a firing order similar to Utensil Poker. here a reference image:

Alright then,even though i have no idea

My idea would be to add a new type of satellite,shield. It should have 3 ammo. When you fire it,a shield will appear in front of your ship,and it will stay in the same place until it gets destroyed. It can block most projectiles,but it can’t block explosions and instant lasers. Enemies also can’t get damaged by the shield.

Here’s what it would look like. It should do the job.(thanks to emerald for the design)

Here’s another idea: nukes.
It would be an upgrade for your missiles,which you can get for 100 keys.(might need to be changed since I still don’t know how hard/easy it’s going to be to get keys in ciu). Just like the scoring unlockables,it will only have effect in new games. The food requirement for obtaining a nuke would be 75 food items. It will travel the same way a regular missile would. Once it explodes,it will destroy all enemies that are both on-screen and off-screen in the current wave. Also,it will ignore the splash damage resistance some of the enemies have(like barriers,which can only take up to 500 damage from missiles). However,it will also reduce your power level slightly.

this is a fat man (fallout reference)

At firepower 0, it would only shoot 1 target and and firepower 20 it would shoot up to 5 targets.

Hmm, that totally doesn’t remind me of the Lightning Fryer. 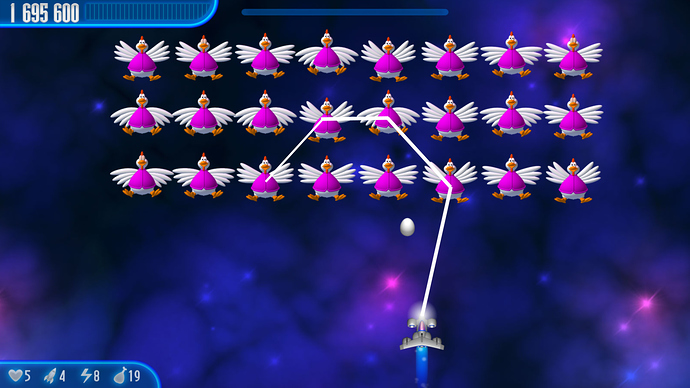 Ah, thanks for explaining.

It reminds me of that frying pan in the intro chapter of ROTY (a frying pan would be much better one.)

That could work,I suppose

Lava Canon : it can burn the chickens and it does %2 damage for the bosses

Retro satellite: this satellite fires infinitely and does a great deal of damage, but every time an enemy or an attack manages to touch it, it will fall a troso of this (it has up to 5 resistance shots). When firing has a small recharge time (to avoid the abuse of this), shoot projectiles of retro normal invaders and in the center of this there will be a ray which indicates that it is ready to fire and if the beam is not recharging.

Might be too overpower in a sense that all weapon available wil be shot simuntaneously.But if according to your concept art it might be suitable to rotate each projectile to the right or left thus might a cycle similar to the utensil poker.

Here’s an idea, boss rage mode! Every boss which health drops below 60% for example enters it’s enraged form, then it has faster attacks and faster movement speed, some even get the ability to regenerate. This would make the game way harder. I made screenshot how it would look. Hope you like it, I also changed the UI a little bit. 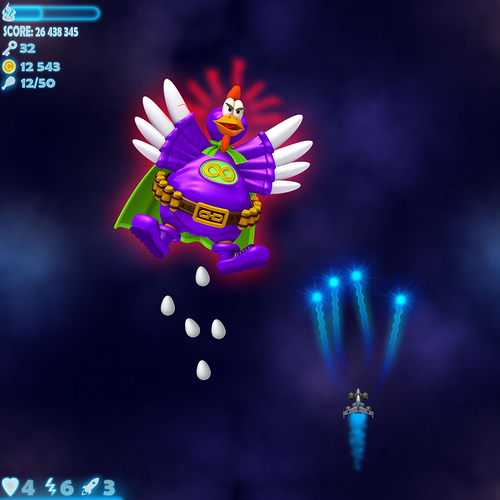 I like that idea! But would it be an unlockable mode,or…?

No default. The game is too easy and bosses have no real “strong” and dangerous behaviors which are easily avoidable. I mean in my opinion the fifth one had easiest bosses ever.