On the subject of Plasma Rifle and Positron Stream reworks

It’s surely strong in very certain occasion only. While in other occasions it’s almost useless. (The chicken is already gone.)

As someone whose main weapon is Absolver, the biggest issue currently is the rate it generates heat. Everything else about it is finely balanced, I would say.

But wasn’t that changed in v37? I mean, it was very buggy and used to generate too much heat in v36, but i don’t think it generates too much heat. it seems fine for me.

Try and fly “High-Speed Traffic” or worse “Caught by Surprise” and you’ll see what I mean. It’s hard enough to juggle those waves with Absolver at all, without also having to manage heat consumption.

I already tried them, and it seems you were right. it needs a littie rework for its heat.

About absolver beam, this still stands as a good idea to improve the weapon

It wouldn’t hurt to see its overheat rate be toned down a little more. To compensate for this, I’d nerf the damage by 20%.

Yes and no.
Rebalancing doesn’t necessarily bean buffing. It’s just that UP and Neutron were chosen as the meta weapons, so the other ones are being brought up to their level of usefulness.

Right now Absolver Beam is kinda all over the place. It performs barely ok against bosses (except for stuff like Bossa Nova and Apple Core, it absolutely annihilates them), it underperforms significantly on waves with fast-moving enemies (especially ones that can escape) and massively overperforms against minibosses.

Let’s consider this: a hypothetical epic wave with 10 columns of 5 egg ship chickens at 100% difficulty. We’ll compare Absolver to Neutron, as it’s currently our most powerful weapon. Both are at max power, and we’ll disregard overheat and assume that all projectiles hit and no damage is wasted.

This wave in total has 500000 hp. Absolver Beam deals with it in 5 shots (since it’s wide enough to hit two columns at once), aka in 9 seconds (let’s call it 10 seconds, because 9 would require perfect timing). Neutron Gun, which deals 17875 DPS, does it in about 28 seconds. That’s almost 3 times as long.
If we take into account overheating, Neutron’s performance will drop significantly, while Absolver will still be able to clear the wave very quickly.

I don’t think any regular weapon should be able to outright delete a dozen of minibosses on high difficulty.

Overall, we want to improve its effectiveness against bosses and regular waves, while making sure it doesn’t steamroll over epic waves. Plus, we’ll be touching on the weapon’s audio and visuals, as well.

Oh i got it, so the absolver beam is useless in some cases and useful in some cases, got it, anyways, thanks for this nice info.

Yeah, too many people were complaining about it not sounding good, anyways, good luck.

I like the AoE idea, it’s inspired. I’ve implemented it as follows:

I played around with it very quickly and it seems to cut through groups of enemies like, well, a plasma torch through butter. That’s why I’ve kept the overheat at 5s for now. Try it out, some further tweaking might be necessary.

I haven’t had time to think about this thoroughly, but I’d be sad to see the splitting mechanic go . Positron’s internal name is “crazy beam” (because of the way it uncontrollably folds over itself), and I think the splitting fits in perfectly with that nature. Plus, you get to do some cool tricks like hitting enemies inside bubbles or behind indestructible barriers.

Regardless, I’ve yet to understand what the problem with Positron is. Is it too weak? Overheats too fast? “Too similar to lightning” doesn’t sound like sufficient reason, particularly since adding continuous-lock ramping wouldn’t really make it more distinct – arguably, it will make it even more similar to lightning (the only difference would be that while chaining ramps damage to many individual enemies, continuous-lock ramps damage to the same enemy)

Perhaps a combination of the two? Keeping splitting and adding continuous-lock ramping. The splitting damage would of course need to be decreased (currently it’s way above anything else; just look at how far above the purple DPS line is: 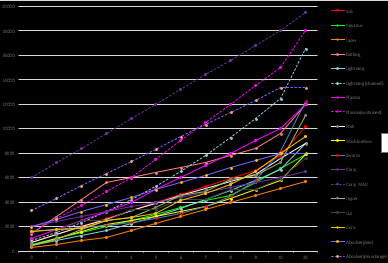 Slightly off topic, but I’ve reduced the chaining time to 0.150 seconds (from 0.200 seconds). A full rework is still pending, of course.

I tested the new version on a few hard/elite missions, and I think it works great. Manual handles bosses just fine, and automatic shreds clusters of enemies. So far I’d say that overheating doesn’t require any tweaking, it’s very powerful as it is.
Some users have pointed to the fact that the AoE flare can affect the visibility of projectiles, so that should probably be looked into.

I decided to explain in more detail why I proposed this change in particular.

I figured that since damage ramping was unfit for Plasma, but the mechanic itself has a lot of potential, Positron would probably be our best shot at implementing it into an existing weapon. With Lightning being oriented towards distributing damage across multiple enemies, and Plasma filling in as both, I thought that Positron might as well become a primarily single-target weapon.

In a way, it also covered @1galbatorix1’s idea of making Positron a “noob-gun” (even if it was initially due to overinterpretation of its in-game description) - strong enough to carry a newbie, while now also being viable for difficult missions in the hands of an experienced player (or rather one that knows how to make the most out of the ramping mechanic).

The main problem with splitting (and chaining as well) is that, in its current version, it’s not very reliable. If it does work at full or close to full efficiency, it’s usually when it targets a small group of enemies that are packed together (which at this point is pretty much AoE Plasma’s shtick, it doesn’t even come close to its performance).
Unfortunately, I have very little knowledge about how exactly the splitting system works, so I can’t really come up with any decent suggestions as to how it could be made more consistent. We are going to address chaining in the Lightning Fryer post, though.

Reliability issues aside, combining damage ramping with splitting would be interesting, but how do we want to achieve that? Splitting gives Positron a massive max damage boost, way bigger than the boost LF gets from chaining.
Removing the beams’ second split would lower the boost significantly, but I don’t think that’s a good option (the fact that it goes from one hit to a whopping seven is probably the most significant difference between this and chaining).
On the other hand, just lowering the damage dealt by each sub-stream would allow us to reach a reasonable damage output with both mechanics, but it still wouldn’t help much against bosses.
In fact, let’s talk about that.

While Positron and Lightning received major buffs (theoretically, anyway) to their damage output against crowds thanks to their new mechanics, their performance against bosses remains the same, save for some exceptions (multi-part bosses such as the Space Crabs, and multi-boss waves like Multiplicity and Show 'em Who’s Boss).

And while we did figure out a way to make chaining work with bosses (and again, we’ll talk about that in the next post - tl;dr, we’re going to suggest that if a bolt hits a boss, it always chains that boss once, assuming it’s not already the last possible link), I don’t think a similar solution would work particularly well with splitting. And if we do implement it for both, that’s just gonna make them even more similar.

I understand where you’re coming from regarding the “crazy beam” thing. I suppose, considering its initial meaning, the ramping could have a visual effect on the beam (making the bend more prominent, or maybe causing more bends to appear), but splitting does also make sense.

All in all, I don’t really know if this would work. If I figure something out, I’ll post it here.

On a side note, @1galbatorix1 thinks he might have an idea about what to do with splitting if it doesn’t go to Positron, but I’ll let him explain that personally in more detail.

AoE flare can affect the visibility of projectiles

Yeah, it’s so bright that causes me to slightly lose my vision.

If it’s been decided to keep Positron as “noob-gun” then giving splitting mechanic seems to be double edged sword. It’s very easy to use, while very dangerous against Cowards and Slobs. Not to mention that splitting is like a tangled mess and obscures vision. Very noob unfriendly.

My point is “Crazy Beam” and “Noob-Gun” things aren’t going along together.

If it’s been decided to keep Positron as “noob-gun”

When was this ever decided??? Update: Never mind

I like the AoE idea, it’s inspired. I’ve implemented it as follows:

Yes, I’m extremely satisfied with the new Plasma Rifle and I think it needs no big changes other than cosmetic tweaks and whatever tiny tweaks the others decide to propose. For example (I think you’ve already done this actually) make the AoE light more translucent so that it doesn’t cover projectiles.

When was this ever decided???

It wasn’t. It just sort of stuck after galbatorix came to that conclusion.
I’m pretty sure the current version isn’t actually supposed to be a “noob gun”.

I only say “If”. Like GgWw said, in WBP post, Galbatorix used that conclusion as his basis.

Sorry, I thought you meant it was already decided. I misunderstood.

I’m not joking, but it really loses my vision a little, not by too much.

If it’s been decided to keep Positron as “noob-gun”

This is an over-generalization. Relatively improved damage for low power levels does not a “noob weapon” make. It just makes it a better choice for when your power level is low (e.g., starting a mission, or losing several lives consecutively).

while very dangerous against Cowards and Slobs

Cowards theoretically start appearing at 30% difficulty , but are in reality very rare until 65%.

So, really, most situations under which the Positon would be problematic are not “noob” situations.

Still need to play with new plasma some more, but I’d almost go so far as to say that it’s too good…