Don’t mind the name Cursor Type, thats only because I can’t think of a name for this weapon but you get the idea. Anyways this weapon is a directional gun where you use your cursor as the aiming for the gun and you use WASD to move your ship around. Thought of the idea a while back and i think it would be a pretty cool idea to see in game 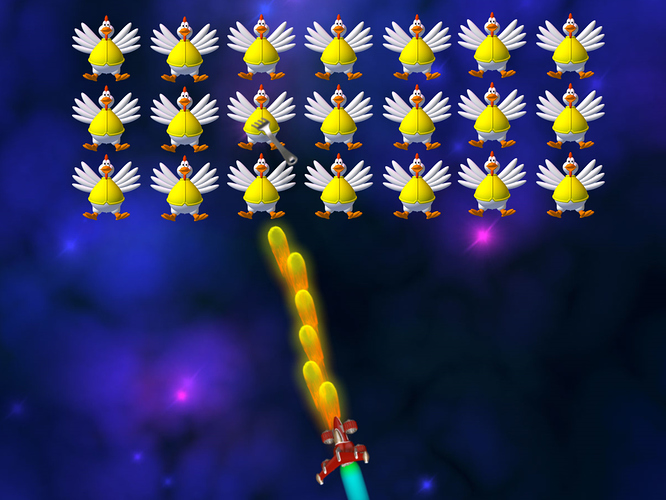 I’ve considered something similar in the past, but any control scheme idea will also need to work for keyboard-only users, gamepads, and touchscreens.

So with this weapon is it possible to rotate your ship even backwards?

any control scheme idea will also need to work for keyboard-only users, gamepads, and touchscreens.

What about just controlling rotations of the ship instead of following the mouse pointer?

Or maybe you know, just make a mode exclusive to PC (yeah I know, shock, not everything needs to be ported)? Maybe it’s time for mobile version to stop preventing PC version from improving?

A possible solution, now that we have charging mechanics…
What if holding the fire button charged like a “flare” that shot out and anchored in place? The longer you charge, the further it will fly before anchoring.

Then manual fire would shoot the actual projectiles toward that flare.

This looks really similar to Clash 'n Slash actually. I’m not against it. How about the more power levels further, the angle also increases? Also the Thrust Control equipables could increase and decrease the angles too. (They stacc too)

Don’t forget about mouse-only gang (which I think it would be 90% of the players?) xD

I had something in mind for a new spaceship where you could control the rotation with the scrolling wheel, but it isn’t something really intuitive.

While gamepad and keyboard aren’t really a problem to get schemes for it, touchscreens are also a quite hard thing to do, since you are basically limited to your thumbs.

A possible solution, now that we have charging mechanics…
What if holding the fire button charged like a “flare” that shot out and anchored in place? The longer you charge, the further it will fly before anchoring.

Now that is interesting in one hand, but while I’ve seen this work on Bloons TD 5, I can definetly see it not working at all in a game where you have to constantly move quickly while shooting.

Imagining playing these in touch screen with two thumbs, one for moving and one for targeting while two index fingers for shooting and satellites. Next day you should get a massage.

But it could work simpler in mission with restricted movement such as Squawk Block.

Gyroscope is actually a good idea, I haven’t thought of that 'cos I’m not familiar with mobile devices.

Now for mouse, requiring keyboard for when you get a new weapon is just bad, at least for this game. Every mechanic on this game keeps the ‘play with one hand’ philosophy when taking mouse in consideration.