Hi! My name is Stardrone and in my opinion Chicken invaders is a series that has one of the best-designed ships I have ever seen in a videogame.
Think about it: if you show someone a screenshot of you using any weapon except utensil and into a “environmental” mission that guy/girl would be really impressed about the design.

In this topic I will show you my concept over a new spacecraft class: The Rooasters

Origin of the name: Rooster + Roaster 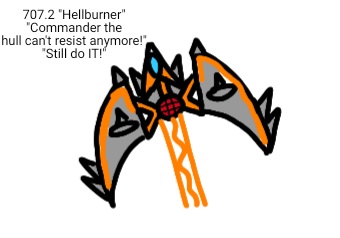 While creating it I tried to stay the more similar to the already implemented ones, and at the end, I have decided to modify Heavy bombers since they start with some similitudes.
Since this ship owns a reactor I tought that was a good idea implementing it on the design since the very start.
Maybe I exagerated a little to the uniqueness but I like it and some variety doesn’t hurt anyone.

This picture shows some sketches I made in the last week to choose the design just to show my creative process (and my really bad drawing skills):

Manifacturer: Henburner & co. industries
Class: Rooaster
Ability: Spicy wings
“Besides the initial slow speed these dreadnought spaceships can reach an incredible velocity when their higly-unstable reactor burns. Only the bravest (and best) heros are allowed to pilot the Rooasters, due to them being the most dangerous ships ever created: flying uncarefully results into self-nuking.”

Some little maths:
A max power Neutron gun deals 500 damage per bullet and 2500 per volley. Spicy wings boosts these values up to 550 and 2800.
The dps will increase up to 18200 at MANUAL RATE while normally is 16250 dps.
The same damage bonus is NOT applied to satellites since it wouldn’t make sense.
Such huge strenght is compensated due to the self-nuking at “overheat” message

With Movement I considered H&C’s and Muller’s equal to 3 and BX’s equal to 0.5

What do you think about this?
Will you criticize me for the too different aestetic?
What do you like and what you don’t?
What would you change?

I would suggest that the rush should deactivate one heat falls below 60%, otherwise it’s just activate once and then keep it cool forever.

Agree.
More skill cap for the fiery rush is needed to make it less “overpowered” and to keep the sense of the description